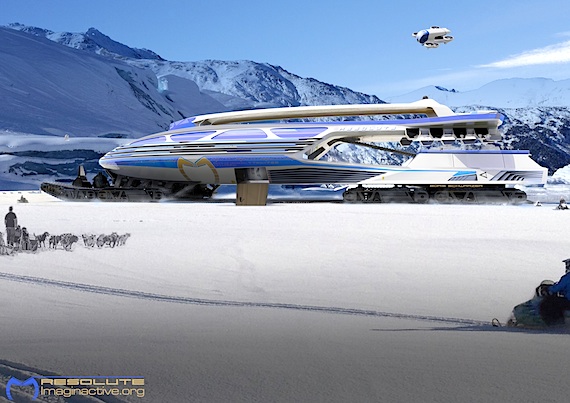 Sled dogs near the Resolute—a design for a huge all-terrain Arctic vehicle, shown here in a rendering by Boris Schwarzer for Imaginactive, described as an “a non-profit organization created by Charles Bombardier where innovative ideas are created and published every week.” (IMAGE COURTESY OF IMAGINACTIVE)

When you look at the design of this futuristic all-terrain cruise vehicle, you have to wonder how Nunavut regulators, who scrutinize cruise ship travel plans, would react to a proposed trans-Nunavut overland voyage by such a vehicle.

Designed by Imaginactive, the all-terrain ship, dubbed the “Resolute,” after the High Arctic Nunavut community, is just one of the futuristic vehicles that this non-profit organization has dreamed up.

Imaginactive is an design organization created by Charles Bombardier, grandson of Joseph-Armand Bombardier, the inventor of the snowmobile.

The Resolute would be an all-season vessel “designed to explore the vast expanses of the Arctic and Antarctic regions on tracks,” Imaginactive said in a recent release.

The idea behind the Resolute: to carry a large group of explorers and tourists in comfort— and appeal to cruise ship operators who can’t bring clients north in the winter.

Made like a cruise ship, but equipped with caterpillar tracks or ultra-large heavy duty wheels, the Resolute would be made to travel in the winter during seven-day jaunts.

To that end, the Resolute would be equipped with multiple engines driving four snow tracks, while its hull, with a clearance of 2.5 metres (8 feet,) would be able to avoid larger ice hummocks.

The Resolute could stop at different locations “such as outposts,” where its passengers could disembark and explore on snowmobiles and side-by-side vehicles stored inside within the hull, Imaginactive says.

The Resolute would also include a helicopter or drone landing pad on its upper deck.

And passengers not interested in heading out could also take a dip in indoor or outdoor pools and head to an observation deck.

“A star gazing platform would allow passengers to enjoy the amazing views at night since there is no light pollution in those remote locations and auroras can be seen frequently,” Imaginactive said.

The Resolute would have storage space for food and water in case of delays or emergencies.

As well, scientific equipment and labs would be built into the ship so that it could be used as a permanent scientific exploration base.