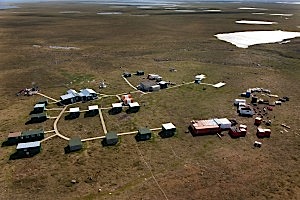 The Kiggavik uranium project, 80 kilometres west of Baker Lake, is operated by Areva Resources Canada Inc. in joint venture with JCU Exploration (Canada) Co. Ltd and Daewoo Corp. Kiggavik includes several uranium deposits that have been identified at both the Kiggavik site and the Sissons site, 20 km southwest of Kiggavik. (PHOTO COURTESY OF AREVA)

An independent watchdog group for the proposed Kiggavik uranium mine near Baker Lake has released a scathing discussion paper aimed at the mines proponent, Areva Resources Canada Inc.

Nunavummiut Makitagunarningit has been campaigning against the uranium mine since 2010, calling into question Areva’s data gathering, decision making, and conclusions in its second draft environmental impact statement (DEIS).

“It is not clear exactly how Areva carried out the research they base their conclusions on, how they analyzed the range of comments and concerns Kivallirmiut have expressed about the proposed mine, and how this analysis relates to Areva’s assessment of either positive or negative impacts,” Nunavummiut Makitagunarningit said.

Information requests to the Nunavut Impact Review Board on the Kiggavik mine project are due by June 29.

Close to 30 questions are asked in Nunavummiut Makitagunarningit eight-page submission. One focuses on the lack of research conducted at the nearly gold mine, Meadowbank.

“Areva claims that one of their mines in Saskatchewan is a better comparison,” to the proposed uranium mine, Nunavummiut Makitagunarningit said.

Areva, however, says they follow “international best practice for socioeconomic research,” and that confidentiality issues in small communities are considered in its reports.

Areva owns two operating uranium mines in Saskatchewan, including the largest high-grade uranium deposit in the world at McArthur River.

Nunavummiut Makitagunarningit, or Makita, wants more future impact assessments based on comparisons with Meadowbank, as “some worrying socioeconomic trends that appear to have emerged since Meadowbank — like increasing crime rates — don’t get much attention in the [draft EIS].”

Also, citing a Kivalliq Socio-Economic Monitoring Committee’s report, Makita said the RCMP found “increases in suicide, violence, sexual assault, gambling, and alcohol and drug usage,” in the region after the Meadowbank mine came into operation — however it is unknown whether the mine was a factor in the crime rate.

Makita questions Areva’s ability to attract and keep jobs in the region due to a high turnover rate of 80 per cent at the Meadowbank mine, the fact that few jobs require less than a completed high school diploma, and that many people from the South might have to be brought up to work.

“If we can’t even be certain about the positive impacts of jobs, does AREVA’s assessment that the socioeconomic impacts of their Kiggavik proposal will be “positive overall” make sense to Nunavummiut?”

“With all these potential negative impacts, how does AREVA determine that the well being of Kivallirmiut will be so positively impacted by the Kiggavik proposal? On what basis do the positives so significantly outweigh the negatives?” Makita asked.

Areva defends this claim, however.

“Areva does not simply view employment as a positive that outweighs everything negative, but rather that employment is a good thing with consequent positive and negative effects,” said the company’s manager of Nunavut affairs, Barry McCallum, in an email to Nunatsiaq News.

“It is important to understand and prepare for the negatives such that they can be managed to create overall net positive effects,” he said.

“We believe it is also worth noting the same 2011 [Kivalliq Socio-Economic Monitoring Committee] annual report includes that a 37 per cent Inuit workforce (289 of 778 workers) was achieved by Agnico-Eagle and the Kivalliq region as of Aug. 31, 2011,” McCallum said.

“It also bears noting that 35 per cent of Areva employees are aboriginal at our McClean Lake site in northern Saskatchewan,” he said, adding that the Kiggavik project would create 600 long-term jobs in the region.

Earlier this month the Baker Lake Hunters and Trappers Organization criticized Areva’s draft EIS, saying there were not enough studies on how caribou would be affected and that wording in the report was too vague.

The HTO report said that “ever since the Meadowbank mine was built, caribou don’t stay near town as much as they used to.”

Shortly after that, the Government of Nunavut tabled its uranium policy in the Nunavut legislature supporting exploration of uranium subject to five principles.

Areva plans to host an open house tour in the fall of 2012 regarding the project.