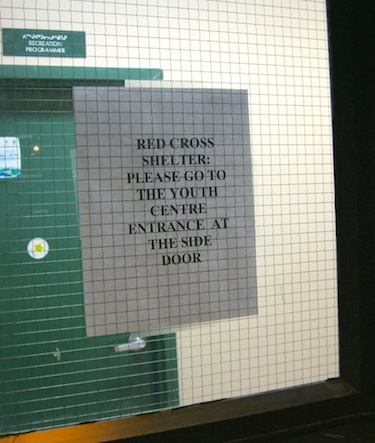 Those who needed a place to sleep April 28 because they couldn’t get to their homes in Happy Valley as a result of the armed standoff came to an emergency shelter at the Arctic Winter Games Arena youth centre. (PHOTO BY PETER VARGA) 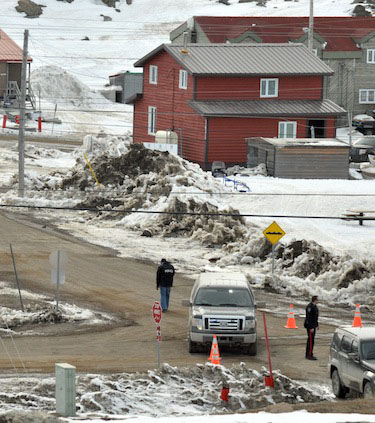 Police barricaded off access to the 1600s in Happy Valley neighbourhood of Iqaluit where police with firearms responded to a call shortly after 4 p.m. April 28. (PHOTO BY THOMAS ROHNER)

“Nothing has changed” — that was the message from Sgt. Michael Hatch of the Iqaluit municipal enforcement office shortly before 6 a.m. April 30 as he stopped his truck on Atungauyait Drive.

The standoff, now well into its second day, continues in the Happy Valley neighbourhood of Iqaluit, part of which remains under a lockdown.

Everybody would like the standoff and lockdown to end quickly, McNeil told Nunatsiaq News.

But “if everyone is safe, it’s the ultimate goal,” said McNeil, who could offer no information yet about how long the standoff might last.

Shortly after 11 p.m. April 29, the voice of a police negotiator talking on a megaphone could be heard throughout Happy Valley.

“You need to pick up the phone. We need to communicate in order for this to work. We’re here for support,” the voice said. “Show them how strong you are. You can do it. You have a good support system. Do it for your family and your community.”

Meanwhile, a group of police dressed in white camo gear and facing backwards inside the back of an RCMP truck, sped down Atungauyait Drive towards Iqaluit.

“This is and continues to remain a volatile situation involving a barricaded male inside a residence in Happy Valley. No other persons are in the residence,” the RCMP said in a news release sent out after 6:30 p.m. April 29.

“Over the past 26 hours, there have been a number of shots fired from within the residence. Due to the high risk to the general public, we ask that residents in the affected area continue to respect the restrictions in place.”

“We understand the strain placed on the residents in Happy Valley and the surrounding area and we appreciate everyone’s cooperation.”

McNeil confirmed that shots were fired from the house, with the RCMP returning what he called “flash bangs.”

Members of the RCMP, some clad in helmets, camo gear and carrying automatic weapons, first responded at about 3:30 p.m. April 28 to a call in the 1600-block of Happy Valley. Since then, access to the neighbourhood around the 1600s and part of the 400s has been blocked off.

All day April 29, an ambulance sat at one of the barricades on Atungauyait Drive near where the standoff was taking place. At 4 p.m. a truck-load of RCMP officers in full gear had headed down the street minutes before.

The driver of the ambulance warned people — who live in the part of Happy Valley not under total lockdown — to stay inside.

Police had already erected blockades on every road heading into the neighbourhood, and they have now cleared the hills above Happy Valley.

That move followed the closure of Joamie Elementary School. Joamie students were sent home after they arrived for school around 8:45 a.m. April 29 because the RCMP ordered that the school be closed.

By 10 a.m., the school was locked and its parking lot was empty.

At 11 a.m. the only signs of activity in the area of Happy Valley where the armed standoff started April 28, included occasional police movements between houses and several deliveries of jerry cans of gasoline to keep the many police vehicles running.

Sources have told Nunatsiaq News that the standoff involves a young man in his 20s who is alleged to be distraught over his absent partner’s decision to study outside Nunavut.

The parents of the young man are said to have left the residence where the standoff is taking place.

“With the help of additional resources being brought in, negotiations are ongoing in attempts to successfully resolve this situation,” the April 29 RCMP release said.

Police are still asking all residents of the neighbourhood to remain inside their homes, and police, ambulances or municipal vehicles are the only vehicles on the roads of Happy Valley.

Many watched blinking vehicles at the blockade on April 28 from a nearby hillside, and said they hoped the incident would reach a peaceful conclusion.

One resident, among the estimated 200 people living in the closed-off neighbourhood, who was spotted by Nunatsiaq News April 28, tried without success to go home in the evening. Police stopped the young woman after asking her for her house number, but she wasn’t allowed to go home.

Some other residents spent the night in their homes behind the barricades, but without their children, who were in daycare elsewhere in the city when the lockdown started.

Many who could not get home were also worried about their pets, left behind inside their houses.

A municipal enforcement officer at a barricade early April 29 said that people who could safely get out of the neighbourhood were being allowed to leave the area, but could not return home afterwards.

Roger Bélanger, who spoke at length with Nunatsiaq News, lives near the house where the man has barricaded himself.

He described how police escorted several children stranded at his home daycare and took them out of the barricaded area at around 7 p.m. April 28.

But many other residents of Happy Valley couldn’t get home.

At the barricade on Atungauyait Drive at 7 a.m., April 29, a visibly upset woman trying to get to the adult group home for work was turned away: the home is in the centre of the lockdown area, she was told.

Rohan Lawrence, still in his Twilight Security uniform from the day before, who also lives in the locked-down neighbourhood, said early April 29 that he had been trying to get home since 4 p.m. April 28.

“I need to get my clothes and shower,” he said as he waited in his car at about 7 a.m.

When told about the emergency shelter nearby, Lawrence said he didn’t want breakfast, just to get home and change.

The City of Iqaluit and Red Cross volunteers opened up an emergency shelter at the Makkuttukkuvik Youth Centre next to the Arctic Games Arena April 28 for Happy Valley residents who could not get past the police barricade.

“When I got home from work, I wasn’t allowed down my street,” Neil Langer, who has lived in Happy Valley for four decades, said April 28.

“It’s never happened in Happy Valley, that I can remember.”

Municipal enforcement officers blocked Langer’s usual drive back home at about 6 p.m., directing him off the neighbourhood’s main road, Atungauyait Drive, and up a steep road towards the Tundra Ridge in the south end of the city.

On a second attempt to pass at a different location, the RCMP blocked the way.

Police offered no suggestions on where to go, and didn’t specify why they blocked his route, he said.

“They could have been more forthcoming. But they weren’t,” he said.

Municipal enforcement officer Darren Kennedy, who had been on duty directing traffic at the blockade since 11:30 p.m. April 28, said all residents who couldn’t get home had the option of staying at the shelter in the youth centre.

“It’s a last resort,” shelter co-ordinator Michel Rhéault said outside the Arctic Winter Games facility. “If anybody needs shelter they can come.”

At about 11 p.m. Wesley Simms, 21, headed to the shelter, where he spoke to Nunatsiaq News on the morning of April 29.

Simms said he was looking at ways to get to his house in the barricaded area from a nearby hill when he heard gunfire.

That’s when he decided to go to the shelter, where he plans to stay until the standoff ends.

Another young man, who declined to give his name, said his parents had spent the night at a hotel, but he had decided to go to the shelter, where on April 29, cots were neatly arranged and breakfast was being served.

As the standoff continued into April 29, a call was put out by the shelter organizer’s for “new or gently used clean towels.”

With files from Peter Varga 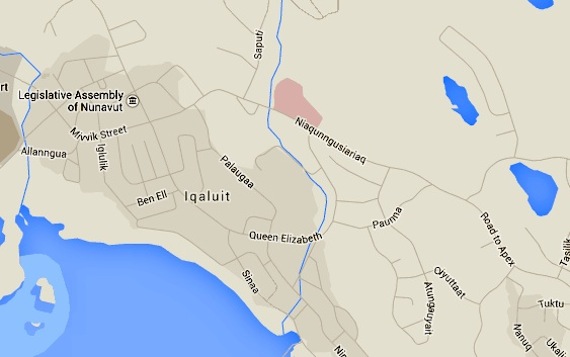 The standoff underway as of 6 a.m. April 29 in Iqaluit is taking place in Happy Valley, roughly in the area between Paunna and Atungauyait, occupied by buildings in the 1600s and 400s. (MAP COURTESY OF GOOGLE MAPS)