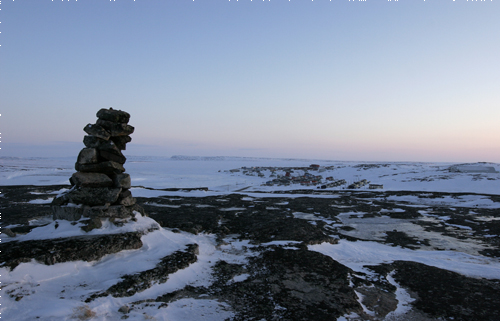 An armed stand-off in Inukjuak, population 1,500, ended March 25 when a man who had held, then released, a woman and two babies hostage turned his firearm on himself. (FILE PHOTO)

An armed stand-off ended at 5 a.m. on Wednesday, March 25, in the Nunavik community of Inukjuak, when a 24-year-old man turned his gun on himself, suffering a fatal wound.

Three hostages, a 60-year-old woman and twin babies, aged nine months, had already been released from a residence in Inukjuak at about 5 p.m., March 24.

The hostages were unharmed, according to Eric Labadde, spokesperson with the Montreal Police Service, whose investigators are now en route to that Hudson Bay community.

The stand-off began late on the evening of March 23 when constables with the Kativik Regional Police Force responded to a call that a woman and two babies were being held at a residence.

The KRPF set up a perimeter around the scene and called in negotiators from the Sûreté du Québec provincial police force to assist with the situation.

They helped to negotiate the safe release of the hostages, Labadde said early March 25.

However, early Wednesday morning at about 5 a.m., gunfire was heard. Police entered the residence and found the man dead inside.

The Montreal Police Service will now investigate the incident, Labadde said. According to the Quebec law regarding public security, when a person dies in a police operation, an outside force must be called in to investigate.

No other details are available for now, Labadde said early Wednesday while investigators were on their way to Inukjuak.

But, since reading the above account of the events of March 23 to March 25 in Inukjuak, several residents of Inukjuak have made comments below or contacted Nunatsiaq News directly to say this police version of what took place is flawed.

They said there were no hostages and no negotiation between the man and police occurred — elements of the incident which the police investigators’ report should clarify.