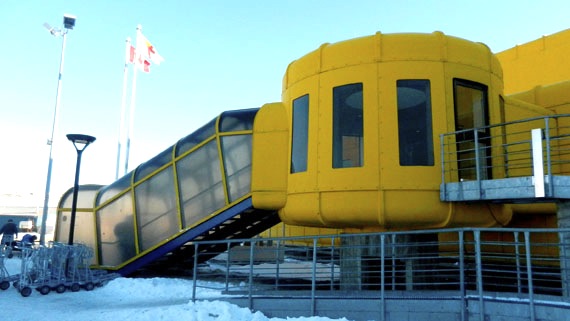 A man who forced a Los Angeles to Moscow Aeroflot flight to make an emergency landing in Iqaluit Nov. 25 will remain in custody in Iqaluit until the he undergoes a psychological assessment. His lawyer has 60 days to submit a report. (FILE PHOTO)

A man who is alleged to have endangered a Moscow-bound plane, forcing it to make an emergency landing in Iqaluit Nov. 25, will remain in custody pending a psychiatric assessment.

Justice Paul Bychok, at a preliminary hearing in Nunavut’s Court of Justice Nov. 28, ordered that 36-year-old Armenian national Sisak Khudaverdyan remain in custody for 60 days while doctors determine if he is fit to stand trial.

Khudaverdyan is charged with multiple offences, including endangering the safety of an aircraft, mischief, causing a disturbance and one count under Section 7.41 of the Aeronautics Act related to endangering passengers.

Russian Aeroflot flight SU107 was flying from Los Angeles to Moscow when its crew made an emergency landing at the Iqaluit airport in the early morning hours of Nov. 25.

Local Iqaluit police and Canadian Border Services Agency agents removed a man from the plane at around 1 a.m. that morning, according to an RCMP new release.

Bychok, at the request of Khudaverdyan’s lawyer, issued a publication ban until a decision for trial is made.

According to Russian state media outlet RT, via TASS, Khudaverdyan shared the Aeroflot plane with 200-pound, World Boxing Association and International Boxing Federation world cruiserweight champion, Denis Lebedev, who said the events on the plane made him fearful for his life.

“Maybe it was his first time flying, maybe he was under the influence of drugs, but he was walking around the plane saying he was a terrorist, and the plane had to land. Half of the plane was frightened, the other half started laughing,” Lebedev told TASS.

Lebedev, who has 22 knock-outs in 29 professional wins, told Russian reporters he considered intervening in the fracas.

“For me personally, my life was in danger. I simply walked up the aisle, and weighed up the situation. In the end there was no need for [my] help, the crew sorted it out themselves. We made an enforced stoppage in Canada, he was arrested, and then we continued flying,” he said.

A 2009 story from the Los Angeles-based newspaper San Gabriel Tribune says police arrested a Sisak Khudaverdyan while he was siphoning diesel at a gas station in the greater Los Angeles area. He was later found to be in possession of 30 stolen gift cards.

That Khudaverdyan was sentenced to 40-months in state prison for the offences.

Lawyers have until Jan. 31, 2017 to submit Khudaverdyan’s psychological assessment to Nunavut’s Court of Justice.