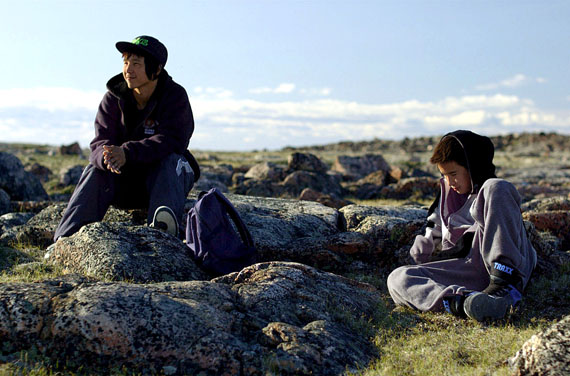 Uvanga (Myself) is the story of a teenage boy who returns to Igloolik after many years to reunite with his family there.

The film was shot in Nunavut over the summer, featuring a Nunavut and Quebec cast.

“It’s important for us to show the film to a Montreal audience, to share our vision, our expression and certain northern realities,” said the film’s co-director Marie-Hélène Cousineau in a news release.

Uvanga tells the story of Anna, played by Quebec actress Marianne Farley, who returns for the first time in many years to Igloolik with her 14-year-old son, Tomas.

Anna had a brief affair with Tomas’s Inuk father when she worked in Igloolik.

Tomas is played by newcomer to the screen, Lukasi Forrest of Kuujjuaq.

Over the course of two weeks, Anna and Tomas strive to reconnect with family, including Tomas’ half-brother Travis, played by Igloolik’s Travis Kunnuk.

Uvanga is the second feature film produced by the Arnait Video Collective, which started in Igloolik in 1991 with the Tarriaksuk Video Centre an Igloolik Isuma Productions project, concentrating on work that features women’s stories.

Before doing this film, Cousineau, along with co-director Madeline Piujuq Ivalu, directed the feature film Before Tomorrow, where Piujuq Ivalu is known for her performance as the character Ningiuq.

Uvanga will compete in the FOCUS section of the Festival du Nouveau Cinéma, which exclusively features Québecois and Canadian productions.

Uvanga will continue touring, heading to Toronto next for its imagineNATIVE Film and Media Arts Festival, as well as the opening of the Yellowknife International Film Festival this fall.