“Our group is honored and excited to perform for Her Majesty” 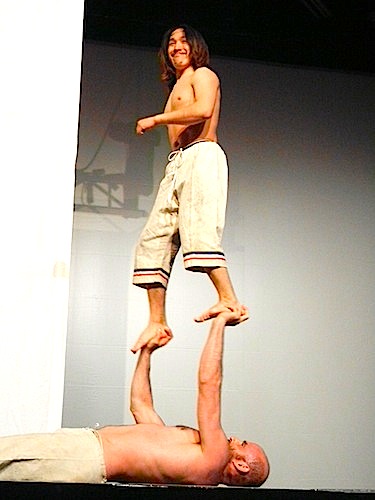 Terry Uyarak and Guillaume Ittukssarjuat Saladin of Artcirq, shown here at during a recent performance at the International Polar Year Conference in Montreal, will perform for Queen Elizabeth and Prince Philip May 13 on the grounds of Windsor Castle in England. (PHOTO BY JANE GEORGE)

Igloolik’s Artcirq perform this week for the Queen Elizabeth II’s Diamond Jubilee Pageant on the private grounds of Windsor Castle.

There they’ll share the spotlight on Canada with the RCMP’s “musical ride.”

Five Artcirq performers arrived May 5 in Windsor to start rehearsals for the show, along with hundreds of other dancers, musicians and performers from around the world, in places that the Queen has visited during her 60-year reign.

The seven-act pageant show titled “Around the World in 60 Years and 90 minutes” features over 550 horses and more than 1,000 performers.

“Artcirq are fine ambassadors, and we are thrilled to have them represent Inuit on the world stage,” said Mary Simon, the president of Inuit Tapiriit Kanatami, which provided logistical assistance to the group, in a joint ITK, Artcirq and RCMP news release.

“Artcirq’s performances present a unique blend of traditional Inuit culture with a contemporary twist, symbolizing the essence of modern day Inuit. Their energy and humour will bring joy to their audiences. They are truly a show fit for a Queen.”

Artcirq’s performance, which will include drum dancing and throat singing, will be presented with the Mounties’ musical ride as part of the “Americas” act of the pageant.

“The Queen herself told us she wanted Inuit to take the stage at this monumental event. Canada will debut with the world famous musical ride, and Artcirq will immediately follow,” said RCMP Supt. Greg Peters in the release.

Artcirq will take part in all four scheduled performances May 10 to 13.

On May 13, there will be a special pageant performance in front of Queen Elizabeth and Prince Phillip.

“Our group is honored and excited to perform for Her Majesty. It is something we will never forget,” Uyarak said in the ITK release.

Artcirq’s participation in the Diamond Jubilee Pageant was made possible with the support of ITK, First Air, the Government of Nunavut, Nunasi Corp.. Atuqtuarvik Corp. and Tim Hortons, the release noted.