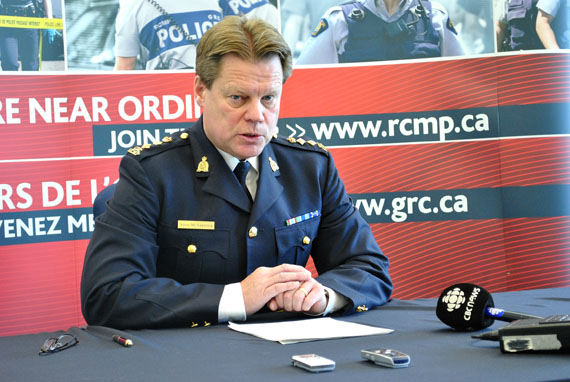 Chief Supt. Steve McVarnock, Nunavut’s highest ranking RCMP officer, said the April 27 shooting incident in Arviat is the fifth dangerous incident involving Nunavut RCMP members in only six weeks. “Let’s be frank and let’s be candid. The territory is very unpredictable and we are in a very dangerous business,” he said. (PHOTO BY JIM BELL)

A detective from the Ottawa Police Service is now headed for Arviat to investigate the April 27 RCMP shooting of a 26-year-old man armed with a handgun stolen April 10 from the Arviat detachment, Chief Supt. Steve McVarnock of the Nunavut RCMP told reporters April 28.

The man is now getting treatment in Winnipeg for non-life-threatening injuries and is expected to make a full recovery, McVarnock said.

“We very concerned about the incident that happened last night. We are pleased that the injuries to the suspect are not life-threatening,” he said.

This is the fifth dangerous incident involving Nunavut RCMP members in only six weeks, McVarnock said.

“Let’s be frank and let’s be candid. The territory is very unpredictable and we are in a very dangerous business,” he said.

The incident started when the Arviat detachment received multiple complaints at around 5:30 p.m. that day about somebody walking around the community shooting at dogs with a pistol.

McVarnock said he doesn’t know if the situation arose out of a mental health issue. But he said it does appear to be part of a worrisome trend.

“We do know that with our regular consultations with detachment commanders, they are reporting enhanced levels of incidents in their communities demonstrating mental health concerns,” he said.

McVarnock said a pistol the man carried was the weapon reported stolen from the Arviat detachment April 10, when a pistol, as well as bullets and ammunition clips, were taken in a break-in.

But McVarnock said police don’t know right now if the man arrested April 27 is also the person who stole the RCMP service weapon and if not, how it came into his possession. He said he expects the answer to that question will emerge after an investigation.

And he remarked that in his 31 years of experience, he’s unaware of any other such incident.

“I’m very concerned about it. It’s obviously a very bold and brazen act to break into a police structure…which is a criminal act in itself,” he said.

To find out what happened, he said V division is doing an administrative review of the theft with the help of security experts from Edmonton.

Meanwhile, the Ottawa detective conducting the external investigation of the shooting will do his work with help of RCMP major crimes officers from Winnipeg.

Also, McVarnock said he has contacted the RCMP Public Complaints Commission, a civilian oversight body, and invited them to send an observer to Arviat.

But the commission decided it wasn’t necessary to do so, he said.

“They were satisfied the external oversight provisions were being adequately addressed,” McVarnock said.

After the incident, police administered first aid and took the man to the local health centre, from which he was sent to Winnipeg.

In the meantime, V division has sent members from Rankin Inlet and Iqaluit to back up the three members stationed in Arviat.

That includes major crimes investigators and Sgt. Jimmy Akavak, who will do community engagement work.

The Ottawa Police Service and RCMP members from the Northwest Territories’ “G” Division have investigated the fatal March 20 shooting of a man by an RCMP member in Igloolik, although no report has been released yet.

On April 23, an armed man startled Iqaluit hospital staff and patients when he walked into the lobby of the building with a rifle, uttering threats.

And on April 16, police in Cape Dorset found themselves in an armed confrontation with a man who they eventually arrested and charged in connection with the homicide of a 16-year-old boy.