“It has got much attention in newspapers since 2010” 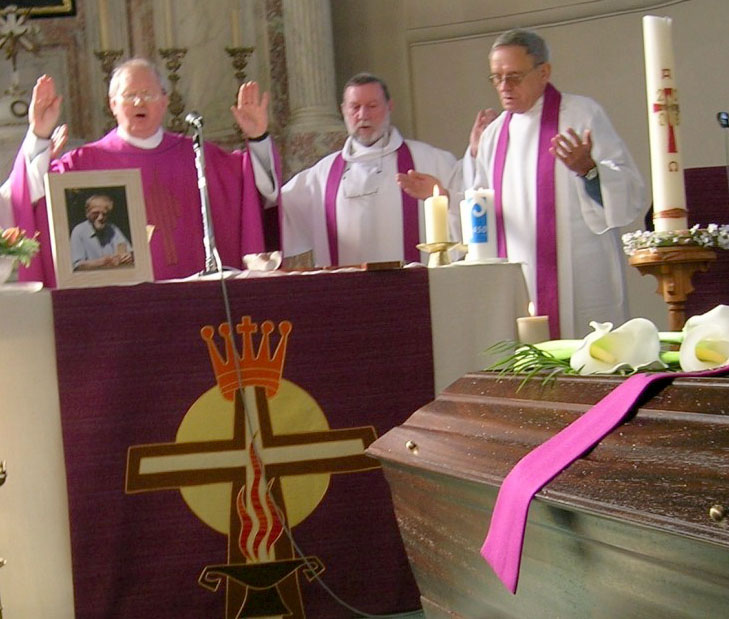 Father Eric Jose Dejaeger, standing in the middle, co-celebrating a funeral mass in 2009 with two other priests inside a church in Belgium, where he evaded arrest for 15 years on sex charges from Igloolik that were laid in 1995. His trial on those and numerous additional sex charges is set to start this week at the Nunavut Court of Justice building in Iqaluit.

The trial of a Belgian-born Oblate priest accused of molesting children in Igloolik and Baker Lake in the 1970s and 1980s is set to begin in Iqaluit Nov. 18.

And when it starts, international media, especially Belgian news agencies that are watching the case with keen interest, will shine a spotlight on Nunavut.

The charges stem from about 40 complainants, most of whom allege acts of sexual abuse while Dejaeger lived in Igloolik.

Belgian journalist Cedric Lagast from the Flemish-language Het Nieuwsblad flew from Brussels to Iqaluit to cover the story.

“Obviously there’s quite a big interest in Belgium. It has got much attention in newspapers since 2010 when we first heard of it,” Lagast told Nunatsiaq News..

“A Belgian man that abused 38 people — that is immense. It would be immense in any country. So the accusations are so big, the amount of victims that he is supposed to have [abused] is so big, that would make it a big story in every country,” Lagast said.

Belgian priests have found themselves in the media spotlight ever since sexual abuse scandals within the Roman Catholic Church rocked that country and several other European nations after the year 2000.

In April 2010, the respected Bishop of Bruges, Roger Vangheluwe, was accused of sexual abuse after his nephew came forward to reveal years of molestation by the bishop.

Vangheluwe retired after those revelations. At the same time, hundreds of victims in Belgium disclosed sexual abuse by priests and other Roman Catholic church workers from the 1950s to the 1980s.

Later in 2010, the Belgian church released a report by an independent commission of inquiry led by psychiatrist Peter Adriaenssens, which revealed 300 cases of sexual abuse by clerics.

The Adriaenssens report found that 13 people may have committed suicide as a result of sexual abuse.

Also in 2010, Dejaeger’s case drew attention after journalist Douglas De Coninck of the Belgian newspaper De Morgen revealed in 2010 that Dejaeger had evaded Canadian sex charges laid against him in February of 1995 and had been hiding in plain sight in Belgium for 15 years.

By 1995, the priest had already served out a five-year prison sentence imposed in 1990 after he was found guilty on nine counts for sexual abuse incidents in Baker Lake between 1982 and 1989.

But after he served that sentence, he never showed up to a June 13, 1995 court appearance in Canada that had been scheduled to deal with a fresh set of sex charges from Igloolik.

On Feb. 19, 1995, Cpl. Tom Power, then an RCMP member stationed in Igloolik, laid the six counts following a lengthy investigation related to incidents alleged to have occured between 1978 and 1982.

Instead, Dejaeger fled to Belgium in the spring of that year, where he was taken in by the Oblate order.

He lived there for 15 years in the face of arrest warrants issued by Canadian authorities and by Interpol.

In early 2011, Dejaeger was returned to Canada after an embarrassed Belgian government discovered the priest did not hold Belgian citizenship.

In 1977, while living in Canada, Dejaeger had renounced his Belgian citizenship to become a Canadian citizen.

Now, Belgian media are focusing their attention on the trial, which is scheduled to be held Nov. 18 before a judge sitting alone at the Nunavut Court of Justice, and is expected to last several weeks.

Lagast has covered other scandals involving the Roman Catholic church, but said the Dejaeger case is one of the worst cases of alleged sexual abuse by a priest that he’s ever seen.

Lagast will observe only one day of the trial, however. It was supposed to start last week, but that had been pushed to Nov. 18 without Lagast’s knowledge, and he now has to return to Belgium.

Regardless, Lagast said his news agency will keep a close eye on what happens in court.

“In one way or another we feel involved and now we want to know what’s going to happen to him,” he said.