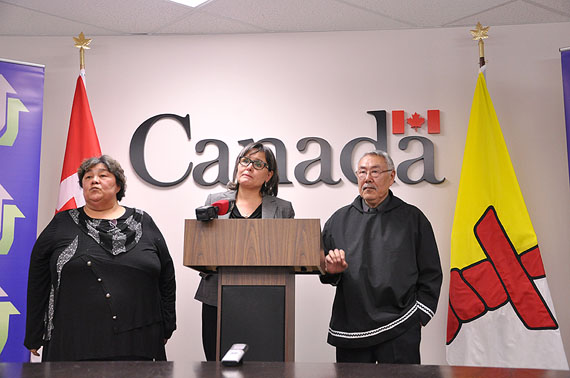 You might want to call it convenient timing because of the federal election campaign that could be launched as early as this weekend.

But Nunavut MP Leona Aglukkaq announced in Iqaluit July 30 that Ottawa will pay for 75 per cent of a marine infrastructure project in Iqaluit aimed at building a deep-sea port and small craft harbour.

Aglukkaq made the announcement alongside Nunavut’s minister of economic development and transportation, Monica Ell, and Simon Nattaq, Iqaluit’s deputy mayor.

That federal funding would amount to $63.7 million of the $84.9 million the project is estimated to cost, with the Government of Nunavut picking up the remaining $21.2 million.

Of course, that’s if the Conservative government is re-elected on Oct. 19.

The federal money is conditional on the project meeting the eligibility requirements of the New Building Canada Fund, and on the signing of a contribution agreement with the Government of Nunavut, a news release handed out at the news conference says.

It is unclear from the release if the sealift facility and the deep-sea port would be a single combined structure or two separate facilities.

But the release says once the project is finished, it will “significantly reduce the time it takes to offload cargo.”

At the same time, the small craft harbour would reduce the risk of boat damage during low tide, improve access to both fishing and hunting and provide a potential base for military and search and rescue operations, the release says.

Ell said at the news conference that the project proposal now has to go through an “engineering phase.”

“As for the GN’s portion [of the budget], we will be submitting a funding [proposal] to the legislative assembly in the fall, and if that’s approved, then we have to start with the proper engineering and technical work,” Ell said.

The proposed project would also need approval from the Nunavut Impact Review Board, Ell said.

“If everything goes as planned, and goes ahead through those processes, we expect construction to start next summer,” the minister said.

There appears to be a discrepancy between what the news release says about the funding and what Aglukkaq said at the news conference.

The release says “the Government of Canada has selected this project for funding consideration of up to 75 per cent of eligible costs, to a maximum of $63.7 million.”

But when asked what amount of money the GN could expect to receive from Ottawa for this project, Aglukkaq answered the whole $63.7-million.

“We committed to that, and confirmed the amount that we are contributing to the Nunavut government for this project. That’s final,” Aglukkaq said.

Ell said at the news conference that she would be tabling the project proposal, along with the GN’s portion of the tab, in the Legislative Assembly this fall.

Iqaluit MLA Pat Angnakak, who attended the press conference, told Nunatsiaq News she would “definitely support this project” in the legislature and, considering the benefits to Iqalungmiut and Nunavummiut in other communities, it would be “silly” not to support.

“This is a project that, way before the announcement, many of us have talked about in the [assembly]… And I have trust that my colleagues will understand just how important this is and I trust that they would support something like this,” Angnakak said.

In a perfect world, Aglukkaq would have made this announcement when she was first elected to Parliament, Angnakak added, so that the facilities might now be in place.

But Angnakak said she’s hopeful that if the Conservative government is not re-elected this fall, other parties will respect the funding announcement.

“To look at the bright side, we’ve never come as far as we’ve come today with this project. So I’m thankful for that and what we want to to do is to make sure whoever is in power will honour this commitment.”

It’s not clear where the facility would be located, although in the past planners have eyed a deepwater area off the Iqaluit causeway.