As the 2013 suicide death toll hits 36, ASIST plans workshops throughout the territory 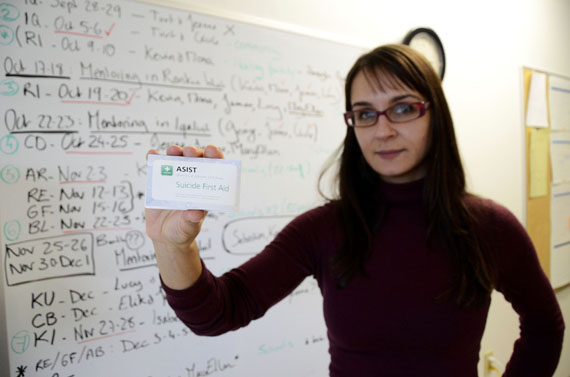 Daisy Panika thinks if the ASIST program had existed a decade ago, it could have the saved lives of her friends.

And that program is needed now more than ever. As of Nov. 4, 36 people in Nunavut have died by suicide, chief coroner Padma Suramala said.

That’s one less than in 2003, Nunavut’s worst year on record for suicide, when 37 suicide deaths were recorded.

ASIST, or Applied Suicide Intervention Skill Training, trains people to talk to those at immediate risk of suicide.

“I never thought my friends had suicidal thoughts. I was young and I wasn’t thinking my friends would do it,” Panika said.

Panika, 26, said three of her best friends died by suicide when she attended school between Grade 7 and Grade 10 in Rankin Inlet.

Panika’s friends had a hard life, like many children growing up in small Nunavut communities, she said. And Panika experienced suicide long before she reached her teens.

Her father died by suicide when she was eight — that’s when she first heard of the word “suicide.”

“For so many years I grieved for him,” she said.

Panika said she started drinking in her teens to deal with her father’s loss.

“I didn’t know I was sad,” Panika said, adding that she experienced suicidal thoughts during that period.

But after travelling to leadership workshops and participating in the Nunavut youth abroad program, her feelings have changed.

“I felt like I was stuck in a bubble. But I finally got out,” Panika said.

Now Panika is a program coordinator at the Kivalliq Inuit Association. She coordinates on-the-land retreats for people to learn about traditional skills, and to talk about issues like suicide.

Panika’s work took her to an ASIST workshop in Rankin Inlet, which she says has helped her become a better person.

“It made me understand Inuit more and appreciate them more and try to be the nicest I can be,” she said.

Panika is one of just under 900 Nunavummiut who have taken the ASIST workshop since its inception, coordinator Isabelle Dingemans said.

Now, ASIST is in the midst of a training surge throughout the territory.

There have already been workshops held in Iqaluit, Rankin Inlet, Cape Dorset and Arviat in 2013.

The number of participants varies, however. Nobody showed up to Iqaluit’s first two-day session in late September. But a week later the workshop drew 17 participants.

In Baker Lake, however, a scheduled Nov. 22 workshop already has 50 people signed up.

For the future, ASIST is also setting its sights on sessions in Kimmirut, Taloyoak, Clyde River, Grise Fiord and Resolute Bay.

“Things seem to be moving forward with this program. To me, it’s extremely exciting to see the response from the different players,” Dingemans said.

That’s because school principals in communities have stepped up, and keep asking Dingemans for refresher courses, she said.

But resources are tight, and Dingemans’ goal of hitting every community before March might not happen.

“It would be really nice to have every community receive the workshop before March. But I don’t think we have the money for that because of the amount of travel.”

ASIST, which runs out of Nunavut Arctic College, has a budget of $300,000 from the Government of Nunavut’s health and education departments.

That budget is also spent training trainers to host future workshops. The goal: to put two of these trainers into each community, Dingemans said.

Right now Dingemans estimates there are about 20 trainers in the territory — four in the Kitikmeot, four in the Kivalliq, and the rest in the Qikiqtani region.

These trainers teach the workshops, which are split into two-day sessions in a classroom environment, featuring activities such as role-playing.

“The actual ASIST intervention allows you to take a moment to pause and put things into perspective a little bit, and to realize that suicide is not the solution, and that there might be other things in your life that you may have lost track of,” Dingemans said.

“This is why the intervention can be done by someone that doesn’t know you at all. They learn the skills that let you talk about what’s going on,” she said.

“That’s empowering for the individual themselves. So a change can happen right away. So this alone can lead to a reduction in suicide rate.”

A variety of people take the workshops too, Dingemans said.

“There’s teachers that have been here a long time, you have Inuit, non-Inuit, there’s people that have just arrived, security staff, janitors,” she said.

But Dingemans stresses that the workshops are open to the whole community, not just school staff in the communities.

“I always make sure that people know that they are more than welcome. Anyone can walk in,” Dingemans said.

For Panika, she’s looking forward to putting her skills to use through her job.

Before Panika attended the ASIST workshop, she brought a group out onto the land to learn traditional sewing skills and to open up about each other’s lives.

“It was hard because when I was there, there was a couple of suicides from our home community,” Panika said.

“And it was good to let it out […] because some of them were still grieving after 20 years,” she said.

“It shocked me, because that’s a long time to grieve, and some of them don’t ask for help. And this training can help them.”