“Go after your dream. No one is going to come and say here is your job” 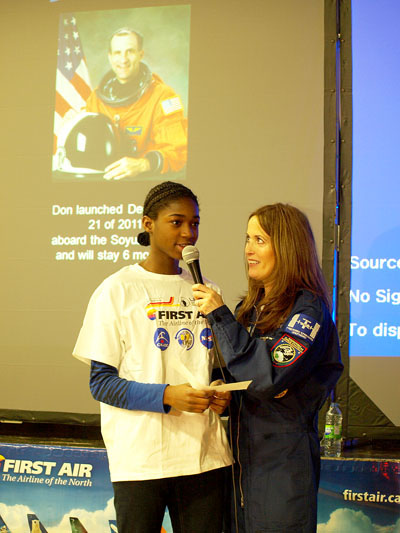 Inuksuk High School student Mary Omole asks NASA astronaut Donald Pettit about how astronauts are trained. The school welcomed about 700 students, elders, and community leaders Feb. 8 to listen to the International Space Station. About 20 students spoke to Pettit via radio, with the help of Lori McFarlane, right, an amateur radio volunteer involved with the space station. (PHOTO BY DEAN MORRISON)

Amateur Radio on the International Space Station, a volunteer group, organized the event, as part of the U.S. National Aeronautics and Space Administration educational program.

The organization has visited schools across Nunavut and Nunavik to communicate with the space station and inspire students to pursue careers in science, technology, engineering and math.

“Amateur radio, especially on the space side, still has a great future,” said Steve McFarlane, a volunteer with the group. “NASA and all the other space agencies want to put this technology on Mars, on the moon.”

“We love to do this, in a world of iPhones and fancy technology the iPhone still can’t talk to the space station,” McFarlane said.

“The kids are sophisticated. No matter where you go in the country they have the Internet, they are well read, well informed and this program kicks them into high gear.”

About 50 Inuksuk High School students submitted questions about life in space, from which 20 were selected.

The students were then connected to NASA astronaut Donald Pettit, who arrived on the space station Dec. 12 for a six-month stay.

Inuksuk student Mary Omole asked about the most difficult aspect of astronaut training.

Pettit said the hardest part of his training is being away from his family.

He also said it takes hard work and determination to become an astronaut.

“After I graduated from college, I put an application in and I kept knocking on NASA’s door until they let me in,” Pettit said.

Omole said she’s now thinking about becoming an astronaut herself.

“At first I wasn’t, but now I am definitely interested in becoming an astronaut and going into space,” Omole said.

For Inuksuk principal Terry Young, Pettit’s message of following your dreams and aggressively going after what you want to achieve resonated with him.

Young said he hopes this had the same effect on students.

ISS maintains an orbital altitude of between 330 and 410 kilometres above the Earth, circling the planet 16 times a day at a speed of 28,000 kilometres per hour or 25 times faster than the speed of sound.