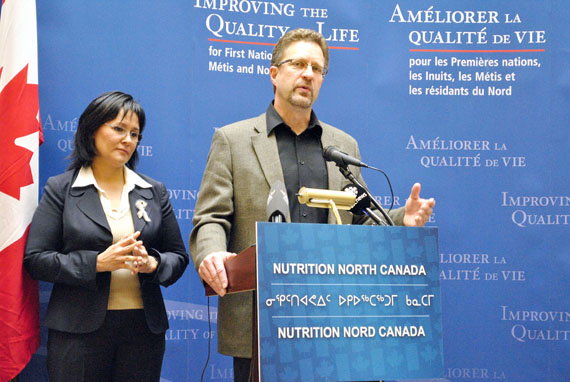 The Auditor General of Canada, Michael Ferguson, will do a performance audit on the federal government’s Nutrition North Canada program and likely issue a report in the fall of 2014, the Fort Smith-based Northern Journal newspaper reported July 29.

The Northern Journal said Ferguson conveyed this information in a letter to six New Democratic Party MPs who had earlier asked him to do an audit of the NNC program.

The auditor general’s website says the release of the NNC audit report is planned for the fall of 2014.

Also, each of the three northern legislatures, including the Nunavut assembly, passed motions requesting that Ferguson do a formal audit of the program.

Critics of the program say that NNC has not delivered promised reductions in food prices paid by northern consumers.

And some observers complain the program has reduced freight revenues flowing to airlines, because NNC’s new structure forces them to compete with each other for North West Co. and Arctic Co-ops Ltd. cargo contracts. This, in turn, increases profit margins for retailers, but reduces them for airlines.

Ottawa announced the program May 21, 2010 at a press conference in Iqaluit.

In a statement released in the late morning of July 30, Dennis Bevington, the NDP MP for Western Arctic, described the northern cost of living as a “crisis,” especially for communities that rely on air freight.

“Northerners speaking together across the country can make a difference in ensuring that the program is working for the most vulnerable communities,” Bevington said.

Erica Meekes, the press secretary to Bernard Valcourt, the AAND minister, said in a statement July 30 that AAND will work with the auditor general’s staff to get them the information they need to review the NNC program.

“Our government wants northerners, like other Canadians, to have quality, nutritious food. The cost of living in the North is high and this includes the cost of food. These costs are driven by many forces — geography, transportation, and national and global economic conditions,” Meekes said.

Meekes defended the NNC program, saying it has increased access to healthy and perishable foods in isolated and remote communities.

She also cited a food price survey that showed prices have dropped on many food items since the program was implemented in April 2011.

“The price of the Revised Northern Food Basket for a family of four has dropped, on average, eight per cent between March 2011 and September 2012. Prices have dropped by as much as 27 per cent on some products, such as two litres of two-per cent milk,” Meekes said.