Auditor General: NNC does not verify if consumers benefit from subsidy 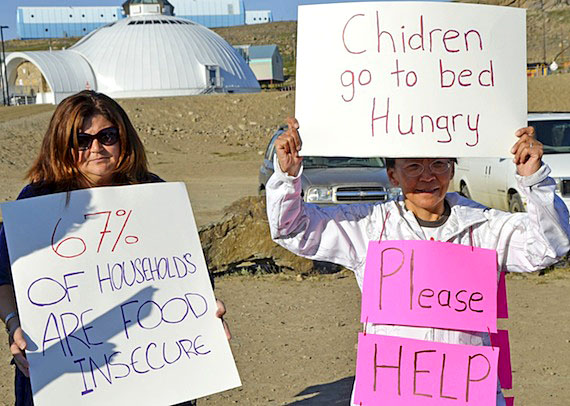 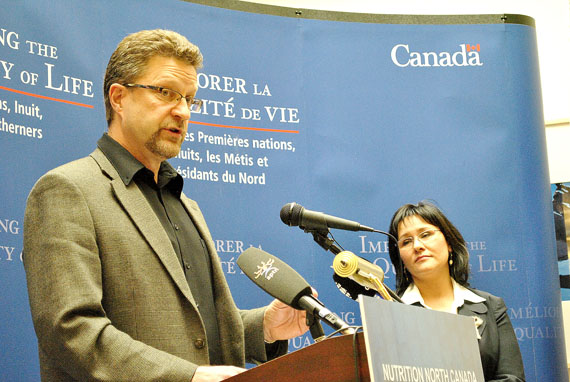 Chuck Strahl, then the AAND minister, and Nunavut MP Leona Aglukkaq announcing the Nutrition North Canada program at an May 2010 press conference in Iqaluit. (FILE PHOTO)

The Nutrition North Canada air freight subsidy program does not ensure that northern retailers pass the full subsidy on to consumers, the Auditor General of Canada, Michael Ferguson said Nov. 25.

“The northern retailers have attested to the department that they do pass on the full subsidy to consumers,” the audit said.

“If the department was able to verify that this was the case, some of the public skepticism surrounding the program could be lessened.”

As well, AAND does not collect information from retailers on their profit margins to ensure they’re in full compliance.

To fix that, the auditor general recommends the program’s contribution agreements be changed to include information on their profit margins that retailers get on subsidy-eligible food items.

The report is available here, on the AG’s website.

Leesee Papatsie, an Iqaluit-based critic of Nutrition North and founder of the Feeding My Family Facebook site, which has amassed more than 21,000 members, said most of the audit echoes what Inuit and other northerners have been saying since Day One.

She said northerners have always wanted proof that northern retailers are passing the subsidy on to consumers and she’s encouraed to see the AG focus on that.

“It’s great. It’s what we’ve been saying all along,” she said. “There’s no indication that the savings are being passed on.”

And if the whole point of the program is to subsidize food, that’s critical information, she said.

“It’s good that it’s done but it kind of pisses me off in some ways,” she said. “As northerners, we say these things but we need an auditor general to verify it. It’s good though because we’re being validated.”

The auditor general points out that the NNC program is aimed at only one of many factors that limit access to nutritious health foods in the North, which include poverty, unemployment, limited infrastructure, and the high cost of living.

“While the program is intended to make nutritious foods more accessible and affordable, it is not designed to address these factors or make the price of food in the North equal to the prices elsewhere,” the AG report said.

But the report said AAND’s contribution agreements do not require that retailers provide information on profit margins charged on subsidized items.

The auditor general said, however, that this method isn’t good enough.

“They did not include information required to determine whether the full subsidy is passed on,” the report said.

The auditor general also found that AAND’s compliance reviews do not verify if the subsidy is passed on.

And the auditor general said the “impact of the subsidy may be negated if the profit margin is increased after the full subsidy is applied to the landed cost.”

That, Ferguson said, is a “missed opportunity” that the department could have used to ensure the transparency of the program.

Papatsie said the report is educational, because it explains how managers in Ottawa monitor the program and it revealed where gaps exist.

“It’s up to the retailer to provide the food price. That’s trusting the retailer in the store. There’s a lot of room for error and manipulation on that level,” she said.

The auditor general also found that eligible communities were not chosen on the basis of need.

“We found that the department has not established community eligibility criteria that are fair and accessible,” the report said.

That’s because communities were chosen based on past use of the Food Mail program, not on current need.

“As a result, there may be other isolated northern communities, not benefiting from the subsidy, where access to affordable, nutritious food may be an issue,” the report said.

In yet another criticism, the auditor general found AAND does not collect enough performance data to find out if the program is meeting its objectives.

That’s because AAND has not followed the federal government’s own guidelines — set by the Treasury Board — for performance measurement on the NNC program.

“There is no indicator to measure whether the full subsidy was being passed on to consumers,” the report said.

And the department has not measured the impact of the program on items that are ineligible.

“An assumption contained in the strategy is that if food is shipped and is affordable, then food is available. However, the department has not defined what it means by affordability.”

And the food basket method of monitoring prices doesn’t work because “the department did not systematically verify the accuracy of prices reported.”

Also, the NNC program is overspending its fixed budget.

Yet another issue is that in some communities, the subsidy rate is higher than the freight rate.

“Some northern retailers publicly reported that they were able to lower their freight rates.”

For her part, Papatsie said she’s pleased to see it officially recorded that the subsidy actually exceeds air freight in some communities.

“That’s what we’ve been saying too, stores are profiting from this subsidy. They’re making money right off the bat,” she said.

On the auditor’s criticism that AAND is not properly containing costs, Papatsie said it shows not enough thought went into the planning and management of a program of vital importance to northerners.

And she added that although she supports subsidizing healthy foods, it would be good to include a few more “stomach fillers” on the list of eligible goods, and also tools for hunting such as bullets and firearms, to encourage more harvesting of country foods.

“I’m hoping for change,” she said, concluding. “It’s good that it identified all these areas. Maybe something positive will come out of it, for the long term.”

In a response embedded in the AG’s report, the AAND department said they agree with the auditor general’s findings and will carry out his recommendations.

The NNC program subsidizes air freight costs on a long list of mostly nutritious and perishable eligible food items transported by air to retail stores and others throughout remote regions in northern Canada stretching from Labrador to Yukon.

With files from Lisa Gregoire.