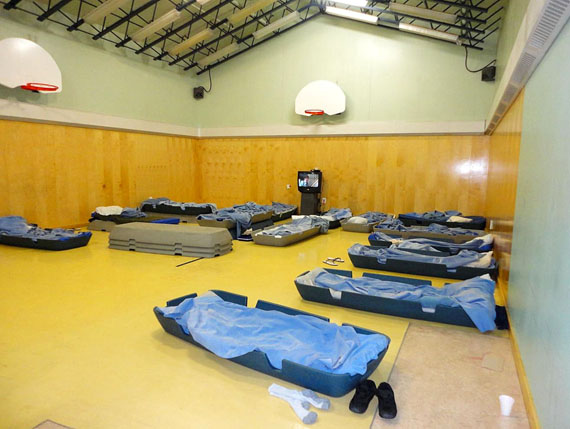 The gymnasium at the Baffin Correctional Centre, used for overflow inmates. In March 2013, the gym, called “the mud room” by some inmates, held 15 people, who slept on prefabricated plastic beds designed for use in emergencies like floods or wild fires. (PHOTO: OFFICE OF THE CORRECTIONAL INVESTIGATOR)

“We concluded that the Department of Justice has not met its key responsibilities for inmates within the correctional system,” the auditor general found.

Ronnie Campbell, the assistant auditor general, said at a press conference in Iqaluit that many inmates appear to be poorly prepared for life after their release from jail.

“In the area of case management, we examined the files of 39 inmates housed at BCC, the Rankin Inlet healing facility and the Uttaqivik community residential centre… we found that serious case management deficiencies at BCC and Rankin Inlet Health Facility limit the department’s efforts to rehabilitate inmates and prepare them for release back to the community,” Campbell said.

The report follows the leak of damning memo that formed the basis of a Canadian Press news story published March 9.

“In my opinion, the Government of Nunavut is likely in significant breach of constitutional obligations towards remanded accused and inmates housed at the BCC facility, and faces a high risk of civil liability towards inmates, staff and members of the public in tort law,” the Canadian Press quotes Sanderson as saying.

GN officials would have received a draft of the auditor general’s report months ago to allow them to respond to its findings and recommendations.

But the final March 10 report from the auditor general confirms Sanderson’s fears.

Ferguson’s staff found that even though territorial officials have known about the BCC’s shortcomings since 1996, they did little to fix them.

“We found that the department has been aware of critical deficiencies at the Baffin Correctional Centre for many years,” the report said.

And they found that despite those festering problems at BCC, the GN justice department put its money into building a new jail in Rankin Inlet and the Makigiarvik overflow jail in Iqaluit, but not into BCC.

“We were not provided with a documented rationale supporting the approach the department took,” the auditor general said.

The glaring deficiencies at BCC include many shortcomings that have been exposed in earlier reports, such as a 2013 report by Canada’s prison watchdog, the Office Of The Correctional Investigator.

• the inability to properly disinfect cells, toilets and showers;

• a lack of programming space;

• an absence of basic security measures to deal with medium- and maximum-security inmates;

• the inability to separate different classes of prisoners according to their security designation, including remand prisoners; and,

• shortcomings at the Rankin jail that also compromise the safety and security of inmates and staff.

And the construction in 2013 of the GN’s new $37-million, 48-bed jail in Rankin Inlet, which they call a “healing facility” did little to correct many of those problems.

“The [Rankin] facility houses remanded and convicted inmates together. We were not provided with a documented rationale for building a combined minimum- and medium-security facility,” the auditor general found.

And the Rankin jail does not address one of Nunavut’s long-ignored needs — space to properly house maximum security inmates.

“The Rankin Inlet Healing Facility will help to alleviate pressure by housing some minimum- and medium-security inmates, but it does not provide space to properly house maximum-security inmates — a need identified as long ago as 1996,” the auditor general said.

At the same time, the new Makigiarvik facility in Iqaluit, due to open soon and built at a cost of $16 million, won’t help the maximum security problem either, though it will relieve some overcrowding at the BCC.

That’s because Makigiarvik is designed only for minimum security inmates, including those with mental health problems.

“Even with the 96 additional beds at Makigiarvik and the Rankin Inlet Healing Facility, the territory will still lack approximately 70 beds,” the report said.

To fix the mess, the auditor general recommends the following:

• the GN Department of Justice should acquire sufficient maximum-security beds and ensure medium-security inmates and those on remand are properly housed, either by contracting with other jurisdictions or by constructing more in Nunavut;

• the GN should ensure that jail conditions comply with its own policies, directives, and operating procedures;

• the GN should do more to stop the flow of contraband drugs into BCC;

• Justice and CGS should correct the problems identified at BCC in fire inspection and other reports; and,

• the Rankin healing facility should develop a coherent vision and fix numerous examples of non-compliance with the GN’s own rules.

The full report is available on the Auditor General of Canada’s website.