The ice extent recorded for Aug. 1 is the lowest in the 34-year-long satellite record 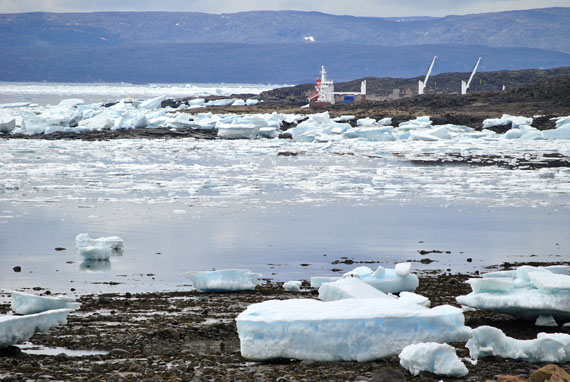 While Frobisher Bay remained clogged with ice from the Davis Strait into August near Iqaluit, as shown in this photo, the Arctic sea ice extent is lower than ever recorded over the past 34 years. (FILE PHOTO)

On Aug. 1, Arctic sea ice extent was just below levels recorded for the same date in 2007, the year that saw the record minimum ice extent in September, the Colorado-based National Snow and Ice Data Centre said Aug. 6.

While ice continues to block sections of the both the Northern Sea Route and the Northwest Passage, the ice extent recorded for Aug. 1 of 6.53 million square kilometres is the lowest in the 34-year-long satellite record, the NSIDC said.

As throughout the summer, the low ice extent for the Arctic as a whole is primarily due to extensive open water on the Atlantic side of the Arctic (Kara, Laptev and East Siberian seas) and the Beaufort Sea, the NSIDC said.

This summer, the ocean has not been the only place where unusual melt has been observed in the Arctic.

NASA researchers reported that for several days in early July, nearly the entire Greenland ice sheet experienced a brief period of surface melt, including at the summit of the ice sheet.

Typically, about half of the ice sheet sees some surface melting during summer, but this tends to be confined to the lower elevations, the center said.

The 2012 melt was associated with a high-pressure weather pattern bringing unusually warm temperatures over the higher elevations of the ice sheet.

And, while this has not been seen previously in the 34-year satellite record, evidence in ice core data from Summit, Greenland shows that it’s happened before several times over the past few thousand years.

These melt events recorded in the ice cores from Summit show similar melts at high elevations have occurred every 150 years since the end of the last ice age.

“Perhaps more important, however, is the extraordinary high melting occurring this year around the lower elevations in Greenland,” the NSIDC said.

Flooding and damage to structures has been reported in some areas where this melt runs off the ice sheet and fills streams and rivers along the Greenland coast. The runoff, as well as the flow of ice and the resulting calving of icebergs, are contributors to sea level rise, the center said.

“Along with the substantial summer sea ice extent decline and the early northern hemisphere snow melt, the pace of Greenland surface melt suggests that 2012 is yet another interesting summer in the Arctic,” the NSIDC said.