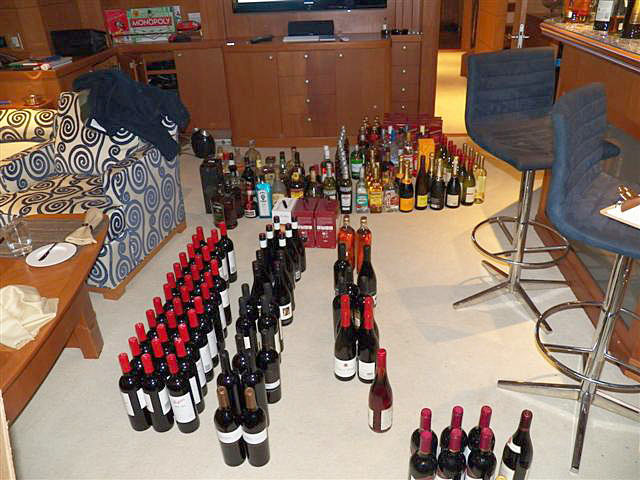 Here’s a look at the wine and spirits seized on board the Fortrus this past September in Cambridge Bay. (FILE PHOTO)

The owner of the Fortus, Australian tycoon Paul McDonald, has paid his outstanding bill for Nunavut Liquor Act offenses, just as he promised last month.

After transiting the Northwest Passage from the eastern entrance, the Fortrus, a 34-metre luxury yacht, which sleeps 12 in cabins with ensuite bathrooms and entertainment systems, arrived in Cambridge Bay in early September.

While docked in Cambridge Bay, the Fortrus ended up being the subject of a police investigation under the Nunavut Liquor Act. That investigation started after an underage girl from Cambridge Bay dived off the side of the yacht during a wild party.

Those on board the Fortrus had also been told by police not to set off fireworks. But they ignored the warning and also sounded their horn late at night, people in Cambridge Bay said.

On Sept. 7, members of the Cambridge Bay RCMP detachment seized 200 bottles of liquor of different sizes, with an estimated Cambridge Bay street value of $40,000.

In addition, McDonald also forfeited about $15,000 of illegal fireworks.

“The Cambridge Bay RCMP would like to thank the public for their continued support in combatting illegal activities in the North,” the RCMP said in a Nov. 20 statement.