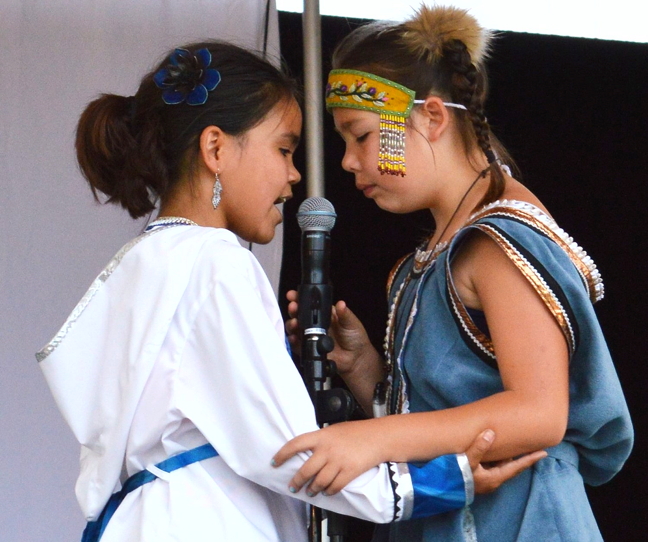 The two girls, Cailyn Degrandpré, 11, and Samantha Kigutak-Metcalfe, 12, who now perform as the throat-singing duo Tarniriik, have performed traditional throat songs together since they were two years old.

Born and raised in Ottawa, their parents knew each other and they grew up side-by-side. They agree they’re “besties.”

For Kigutak-Metcalfe, their performances are about sharing their culture with others. It’s important because that is historic, she said.

“Sixty years ago, we weren’t allowed to,” Kigutak-Metcalfe explained.

The two girls performed in June 2014 at the release of the Truth and Reconciliation Commission Report and at the swearing-in of Prime Minister Justin Trudeau last autumn. They even performed for former Prime Minister Stephen Harper.

Being in the spotlight doesn’t seem to make the girls nervous at all. Not even when they sang for the PM.

“I was thinking, ‘Oh my god, this is amazing!’” Kigutak-Metcalfe said, eating her popsicle in the sun.

The two girls practice every time they meet, just for fun. It brings them together. Among the traditional throat songs they perform, “Little Dog” and “Love Song” are their favourites. On that, they both agree.

While Degrandpré’s hobbies consist of a long list of sports, Kigutak-Metcalfe likes to spend her free time with art — painting and designing Inuit tattoos. She draws them on herself and friends, and shows them off enthusiastically.

“I just move my hand and go where ever it takes me,” she said.

She also likes to dance and she performed a propeller dance at the festival this weekend as well.

Another thing the girls agree on: They both want to be world-wide renowned throat singers when they grow up. They’re on their way there but they do have back-up plans just in case.

If these throat singing plans fall through, Degrandpré said she wants to be an “animal-saver,” and she mentions dogs and foxes in particular.

Kigutak-Metcalfe would like to be a kindergarten teacher because she said she wants to teach art and help over recess.