These maps show how the range used by Baffin Bay polar bears has shrunk since the 1990s.

Baffin Bay polar bears, which travel less than their ancestors did a decade ago, may be showing the first signs of inbreeding due to their increased isolation from nearby polar bear populations.

That’s according to a new study written by a team of Canadian, Danish and Norwegian scientists and published in the Wiley Ecology and Evolution scientific journal.

The study compared tracking data collected from female Baffin Bay polar bears in the 1990s and 2000s, and marked significant decreases over that period in the overall range of polar bears travelling during the winter months by sea ice.

That’s in part because there’s significantly less ice to travel on, which the report noted in some cases prevents polar bears from interacting with neighbouring subpopulations in Lancaster Sound and Davis Strait.

“Over the past three decades, there has been a significant decline in sea ice in Baffin Bay and surrounding areas, which has directly translated to loss of habitat available to the [Baffin Bay] polar bear subpopulation,” the report concluded.

As a result, polar bears in the region have “become more discrete, with less exchange between other neighboring subpopulations.”

“These changes are likely due to reduced sea-ice extent in winter, early break-up in spring and complete absence of sea ice in summer.”

According to the report, between the 1990s and 2000s there was a 17 per cent range reduction recorded in the winter by female polar bears travelling in the Baffin Bay region, down from 906,657 square kilometres to 593,077 square kilometres.

The report also noted that data for male polar bears in the Baffin Bay subpopulation “suggest low apparent survival… which may reflect either increased natural mortality or emigration.”

Several polar bear generations will need to be studied to fully understand the impact of continued genetic isolation, the report noted.

The Baffin Bay subpopulation is considered one of the healthiest polar bear groups among the 19 separate subpopulations in the circumpolar Arctic.

A major source of subsistence hunting, the subpopulation supported a harvest of about 130 polar bears shared evenly between Nunavut and Greenland.

Early this year, Greenland’s department of fisheries and wildlife increased its quota to 80 polar bears, with Nunavut expected to follow suit with a similar quota increase later this year.

But because the subpopulation exists within a “seasonal ice eco-region,” as opposed to bear populations further north, the report suggests that data on Baffin Bay polar bears could be a broader indication of future climate change impacts on the species.

“We suggest that this [data] is a consequence of ongoing loss of sea ice in Baffin Bay and reflects climate impacts that are likely to occur for other subpopulations in the seasonal sea-ice eco-region,” the report said. 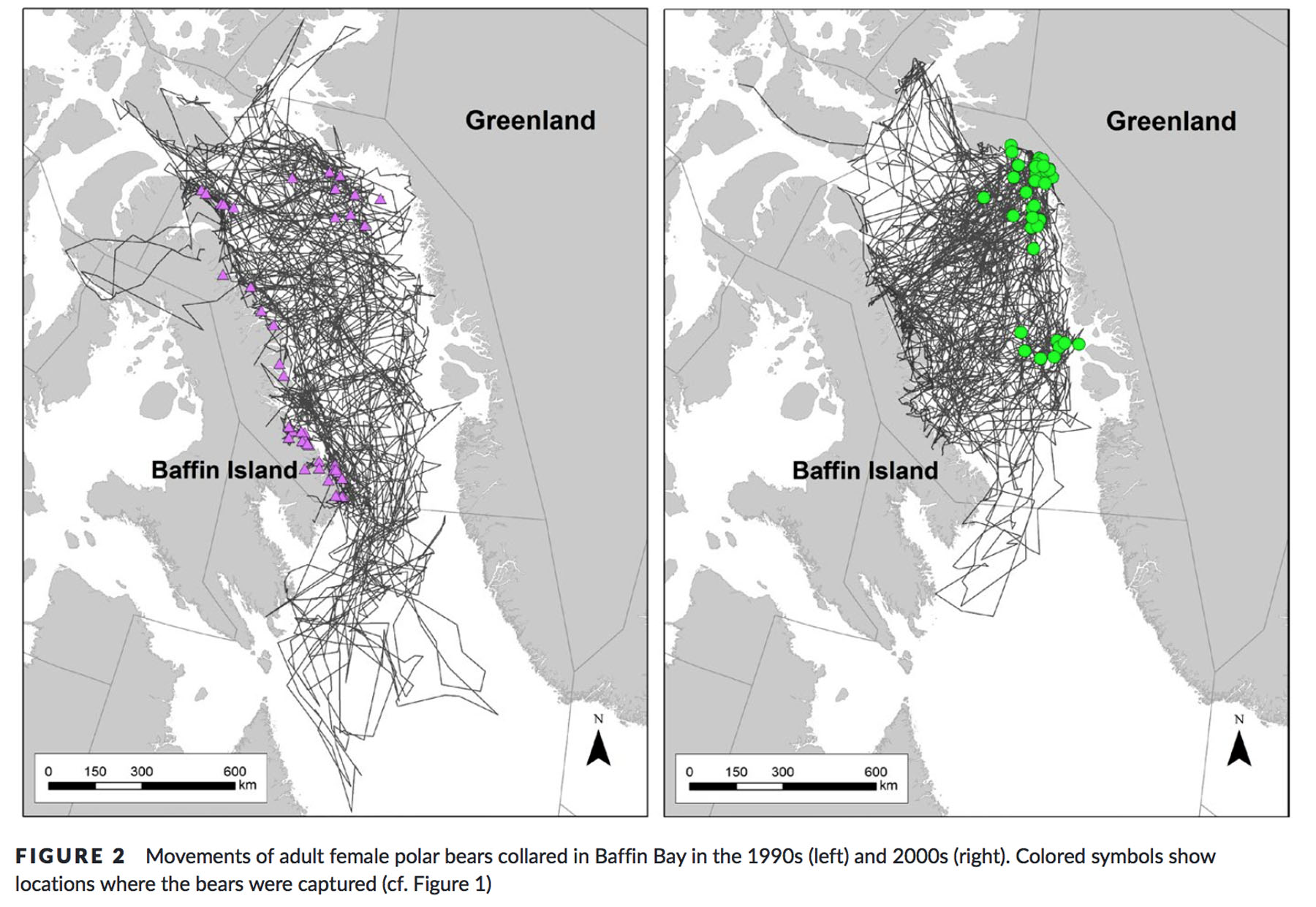 This map compares the range of female Baffin Bay polar bears between the 1990s and the 2000s.