Baffin Inuit org holds board meeting this week in Iqaluit 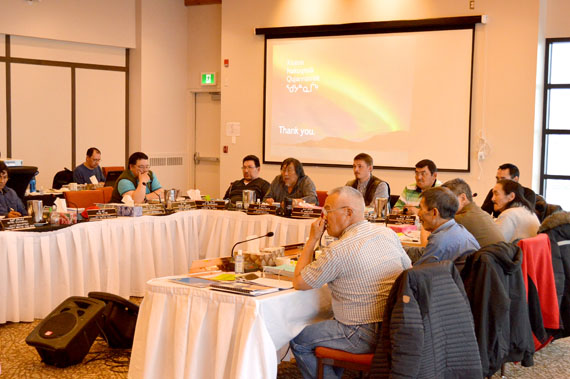 The Qikqtani Inuit Association annual general meeting in Iqaluit this past October. The organization’s board will hold two days of meetings in Iqaluit starting Feb. 17. (FILE PHOTO)

The impact of the Mary River iron mine on northern Baffin Island: that’s among the topics slated for discussion at the Qikiqtani Inuit Association’s first board of directors meeting in 2016, which will take place Feb. 17 to Feb. 18 in Iqaluit.

At the QIA’s last meeting of directors, held in October 2015, the organization proposed a compensation fund for hunters living in the five communities most affected by Baffinland Iron Mines Corp.’s Mary River iron mine on northern Baffin Island.

The mining company is expected to figure largely in the upcoming meeting.

Baffinland’s 2014 proposal to nearly triple its iron ore production over a longer shipping period requires a revised Inuit Impact Benefit Agreement between the QIA and the mining company.

To renegotiate that agreement, the QIA said it will conduct three rounds of community consultations in the five most affected communities: Hall Beach, Igloolik, Arctic Bay, Clyde River and Pond Inlet.

QIA president Pauloosie (PJ) Akeeagok told Nunatsiaq News in November 2015 that the first round of consultations, which yielded “a really good turnout,” had been completed.

The results of that consultation will be sent back to the communities before a second round — yet to be scheduled — is organized.

The review board then recommended that the terms and conditions of the project certificate be amended in light of the significant changes proposed by Baffinland.

The QIA’s board meeting the Frobisher Inn’s Koojesse Bayview Room will be open to the public, as of 1:30 p.m. on Feb. 17, a news release said Feb. 15.

“The afternoon will focus primarily on the president and the secretary treasurer’s report,” the release said.

“To wrap up the meeting, the board will proceed with the nominations and appointments for various boards and committees.”

The Baffin region association generally holds two meetings every year, one in the spring and another in the fall.