QIA has collected $24.2 million from Baffinland so far 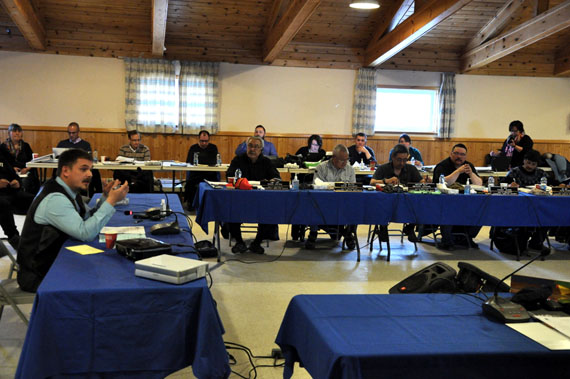 PJ Akeeagok, president of the Qikiqtani Inuit Association, speaks Oct. 4 to participants on day one of the QIA’s annual general meeting in Iqaluit. The meeting continues at the Anglican parish hall until Oct. 6. (PHOTO BY THOMAS ROHNER)

The Inuit organization that represents Baffin-area beneficiaries wants to establish a legacy fund from the $24.2 million so far collected from Baffinland’s Mary River iron mine project.

That fund would “save for future generations of Inuit while providing benefits to current generations,” PJ Akeeagok, president of the Qikiqtani Inuit Association, said at the organization’s annual general meeting in Iqaluit Oct. 4.

During the presentation of his annual report to board members, Akeeagok said he would introduce a proposed policy on Oct. 5 to establish that fund.

“It’s a very exciting time in QIA history, where we are safeguarding funds for future generations of Inuit while delivering programs based on the return on investment,” Akeeagok said from the Anglican Parish Hall.

Royalties from the north Baffin mining operation have been growing within QIA coffers since 2013, when the Inuit organization and Baffinland Iron Mines Corp. signed an Inuit Impact and Benefit Agreement.

“All of the Mary River Project IIBA royalties have been sitting in a separate QIA account accumulating interest. The current value of that account is $24.2 million, to March 31, 2016,” Akeeagok said.

But with the new revenue policy proposal, Akeeagok said he hopes to actively invest that money.

One potential benefit of the new policy would be to increase funding for the organization’s Community Initiatives Program from roughly $400,000 to $1 million, said the president.

The executive committee, along with senior administrators and investment managers, would oversee the proposed policy and present annual reports to the board, Akeeagok said.

But first, board members will debate and vote on the policy Oct. 5.

During his president’s report, Akeeagok provided a breakdown of money for programs delivered by the QIA in the 2015-16 fiscal year, including:

• nearly $575,000 for the compassionate/bereavement program, which provides beneficiaries with funds to travel for family funerals;

• nearly $550,000 for the Ilagiiktunut Program, a fund launched in 2014 to offset the social, economic and cultural impacts of the mine; and,

• about $130,000 in executive committee grants and contributions.

Despite the windfall in royalties from the Baffin iron mine, the relationship between the QIA and the mining company has hit some snags recently.

In July, the Inuit organization filed for arbitration under the IIBA because, the organization claimed, the company withheld agreed-on advance payments and other owed funds.

Akeeagok said Oct. 4 that the expected conclusion of that arbitration has been pushed back a few months.

“Initially QIA aimed for a final decision of the arbitration panel by the end of the calendar year, however… QIA is [now] anticipating a decision… would occur early in 2017,” the president said.

Akeeagok also said another revenue stream had been agreed on by the board at its February meeting.

At that meeting, the Inuit organization reached a dividends policy agreement with its corporate subsidiary, Qikiqtaaluk Corp.

“The purpose of [the policy] is to provide QIA with an annual financial distribution of 20 per cent of QC’s net after-tax profits,” Akeeagok said.

But that amount for 2015-16 is still unclear, said the president, because of an outstanding insurance claim on a damaged fishing vessel owned by Qikiqtaaluk Corp.

However, the QC did present the QIA with a cheque for $1,063,157 million this week, the QIA said in a news release issued late in the afternoon of Oct. 5.

The Inuit organization’s annual general meeting, open to the public, is scheduled to take place from Oct. 4 to Oct. 6 at Iqaluit’s Anglican Parish Hall.

A three-year review of the Mary River project is scheduled for 9 a.m. on Oct. 6.