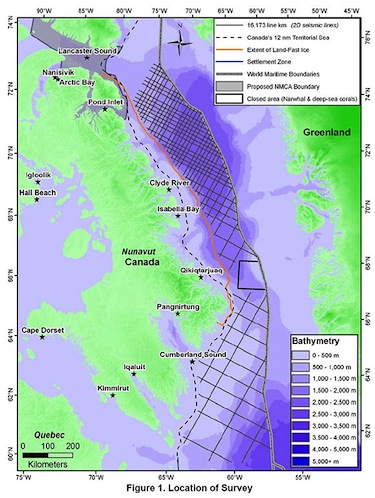 This map from the NorthEastern Canada 2D Seismic Survey project description shows where the proposed seismic testing would take place. 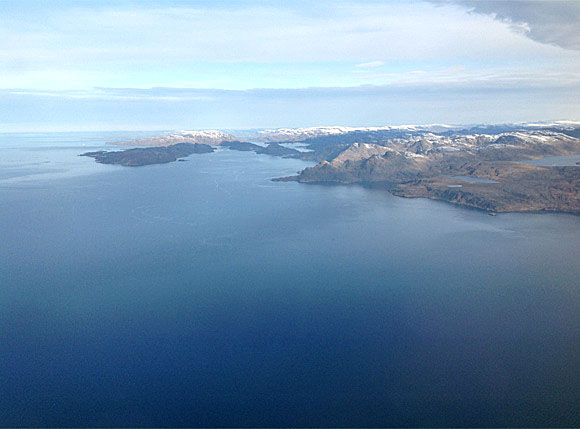 This image from the project description for NorthEastern Canada 2D Seismic Survey shows how devices mounted on a vessel, as well as dragged behind the vessel, would send sound waves down through the waters of Baffin Bay.

Three companies, TGS-NOPEC Geophysical, Petroleum Geoservices and Multi Klient Invest AS, want to collect information about what kinds of sediments and rocks lie under the seabed in Baffin Bay and Davis Strait.

To do that, they’re proposing to take out a research vessel equipped with noise-producing devices.

With the information these collect by shooting sound waves through the water, they’ll be able to produce an image of the different rock layers beneath the sea floor — the first step in helping geologists determine whether oil or gas is likely to be found.

After public meetings on the project, held in Pond Inlet April 29, Clyde River April 30, Qikiqtarjuaq May 1, and Iqaluit May 2, the hamlet of Clyde River and the Nammautaq hunter’s and trappers organization say they are still firmly against the seismic project.

In a joint letter to the National Energy Board, they say the proposed project might have a negative impact on narwhals, bowheads, walruses, seals and their marine mammals’ food sources of crustaceans, shrimp and turbot.

“The proponent has not properly identified how these food sources of the mammals will be affected. As is obvious, the larger mammals depend on the smaller, more fragile populations of sea animals for survival,” their letter said.

“These are not mentioned in the application. Any negative impact on them would surely have a domino effect affecting our way of life.”

The area is also home to cold water corals — which are believed to be among the oldest living animals in the world, they said.

A balance should be struck between development and the environment with “support for the wildlife that inhabit it,” they said.

“Regardless of any development, we will need to protect and sustain our 4,000-plus-years-old culture of subsistence harvesting in this region,” they said.

The project proponent didn’t provide any concrete baseline data about animals in the affected sea region, they said.

And the Department of Fisheries and Oceans didn’t have enough information “that could be used as a barometer to afford consideration… for such an enormous multi-year project that could potentially be detrimental and harm the environment and sea animals.”

The letter said the proposed seismic project and the “resulting oil and gas drilling it would bring are not balanced development.”

Both the hamlet of Clyde River and the HTO also passed unanimous motions dated May 6 opposing the project.

“We are of strong conviction that this seismic survey in our area, and in all areas around Baffin Island will have a strong potentially devastating effect on our capacity to harvest these foods and putting our traditional food supply at risk,” the HTO motion said.

It’s not the first time the seismic testing survey has sparked opposition.

In 2011, a similar proposal to start five years of seismic testing in the Davis Strait and Baffin Bay area, outside the Nunavut land claims settlement area, sparked opposition from people in Clyde River and Pond Inlet, the Arctic Fishery Alliance, the Baffin Fisheries Coalition and the Qikiqtani Inuit Association, which said the program was ill-planned and promoted.

Lootie Toomasie, chair of the Arctic Fisheries Alliance, said the AFA, a group made up of HTOs and community trusts from the Qikiqtarjuaq, Grise Fiord, Arctic Bay and Resolute Bay, is also against the current project.

“Everybody is opposing this,” Toomasie told Nunatsiaq News.

His main concern is that catch rates of turbot are decreasing. And such a project could further harm turbot and marine mammals, he said.

“The fishery up here in 0A will be impacted for sure,” Toomasie said.“The fish will be scattered and will move away from the spot, and they will not come back…[that’s] a big concern for most quota holders in Nunavut.”

The AFA, as well as the Baffin Fisheries Coalition, have expressed concern about the effects of seismic testing in Baffin Bay and Davis Straight in the past.

In an April 30 letter to the National Energy Board regarding the 2D seismic survey project, the AFA outlined concerns including:

• how possible reduced catch rates will be dealt with;

• what distance the seismic vessel will go around the fixed gear fishing areas;

• a suggestion that the fisheries liason officer should communicate daily the location of the fixed gear fishing areas to the survey vessel; and,

• clarification on terms such as the “native harvest area” as seismic activity is not to take place near it.