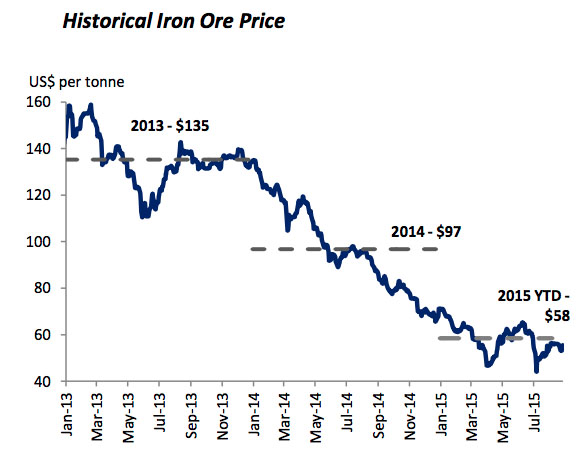 This graph shows that since January 2013, when Baffinland received the first version of its project certificate, iron ore prices have tumbled to historic lows, causing big financial problems for the high-cost Mary River iron mine. (GRAPH FROM THE SINGAPORE EXCHANGE) 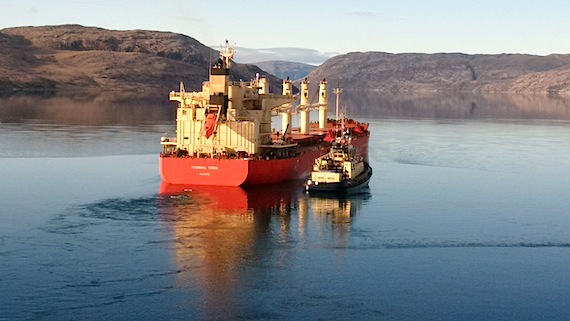 The Federal Tiber bulk carrier departed from the Mary River iron mine’s Milne Inlet port this past Aug. 8 with 53,624 tonnes of iron ore, Baffinland’s first shipment. But the company needs to ship a lot more ore more cheaply before it can start making money. (FILE PHOTO)

“Baffinland is experiencing the challenge of ramping up production against a market of global iron ore prices remaining at historical lows,” a company spokesperson said Sept. 28 in a statement emailed to Nunatsiaq News.

“To help address this situation, Baffinland has had to take the difficult but necessary decision to temporarily reduce salaries at an equal percentage across the workforce.”

Baffinland did not give the “equal percentage” by which they’ll cut employee wages.

But multiple sources have told us Baffinland has informed its workers that, from now on, they can expect to see pay cheques that are 10 per cent smaller than before. And the company has not said when the 10-per-cent wage reduction would be lifted.

In a letter to employees earlier this month, the company told workers their wages are getting cut for two reasons: the company’s production goals have not been met and that iron ore prices are falling.

When Baffinland received the first version of its project certificate in late December 2012, global iron ore prices stood at around US $160 per tonne.

But since March 2013, iron prices have declined steadily, bottoming out at around US $50 per tonne last spring and rising to about US $58 earlier this month, still well below 2012 levels.

In response, Baffinland has decided that to make a profit in the high-volume, low-margin iron ore business, they need to ship more ore, more often, to their customers

To that end, they’ve applied to regulators for permission to carry out a dramatic increase in the annual volume of production at Mary River.

Its Phase 2 proposal, sent to regulators in November 2014 and now in front of the Nunavut Impact Review Board, would see production rise to 12 million tonnes a year.

At the same time, the company would ship ore from Milne Inlet for 10 months of the year, including winter, when ore vessels would cut through the ice of Eclipse Sound until about March.

In a letter earlier this year to Bernard Valcourt, the Aboriginal Affairs and Northern Development Minister, Baffinland said they can’t make money at their current levels of production.

“This additional efficiency is vital in supporting the financial viability of the Project and is necessary to ensure that the benefits of the Mary River Project and the ERP will continue,” Baffinland wrote in the letter to Valcourt.

Over the past year, iron ore prices have continued to fall, mostly because of economic weakness in China and a market that’s saturated with low-cost iron ore from Australia, Brazil and other big producers.

In its Sept. 28 statement, Baffinland also said the recent wage cuts are part of a larger cost-cutting exercise.

“This is one of a series of measures designed to improve the cost competitiveness of the operation. We continue to execute a cost reduction plan and have announced a strengthening of the site management team,” the company told Nunatsiaq News.

But Akeeagok said wage reductions are an “operational decision” by the company not covered by the Inuit impact and benefits agreement between QIA and Baffinland.

“QIA’s priority is to implement the Mary River Project IIBA and to ensure that Inuit benefit as a result of the project, whether it is through programming, training, employment or contracting,” Akeeagok said.

“The working relationship is on-going between QIA and the company despite any financial issues the company may have.”

Baffinland shipped its first load of iron ore to Germany this past August from its Milne Inlet port.