Inuit leaders should state their views on uranium mine: Makita 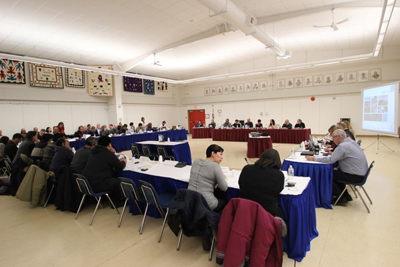 NIRB hearings into the proposed Kiggavik uranium project were held in Baker Lake this past March. (PHOTO COURTESY OF AREVA)

Nunavummiut Makitagunarningit, the Baker Lake-based anti-uranium group, is urging Inuit organizations in Nunavut to make public their support for a recent decision issued by the Nunavut Impact Review Board.

On May 8, the NIRB released its final hearing report into Areva Canada’s proposal to operate a uranium mine in the Kivalliq region, recommending the project “should not proceed at this time.”

The board said its decision hinged on the fact that Areva was unable to provide a definite start date or development schedule for the mine, making it difficult to assess future environmental and social impacts.

During the NIRB hearings into the proposed mine, hosted in Baker Lake this past March, both Nunavut Tunngavik Inc. and the Kivalliq Inuit Association remained neutral on the issue.

But now the Baker Lake group, known as Makita for short, said Inuit leaders have an obligation to oppose approval of the Kiggavik project, based on what Makita calls “the best interests of [their] constituents.”

“The hearings made very clear that this project lacks adequate public support,” wrote Makita member Hilu Tagoona in a May 13 letter addressed to both Inuit organizations.

“Supporting the NIRB’s recommendation will demonstrate that NTI and KIA participated in the review of the proposed Kiggavik project in good faith, and that they will serve the interests of the [Nunavut Land Claim Agreement] beneficiaries who live in the affected communities,” Tagoona said.

“In serving these interests, NTI and KIA must also ensure that the NIRB’s recommendation, which incorporates years of feedback from technical experts and the NLCA beneficiaries you represent, is not overturned by the federal minister.”

The NIRB has forwarded its Kiggavik recommendation to Bernard Valcourt, the minister of Aboriginal Affairs and Northern Development, who, in the coming months, will either accept or reject the report.

In its May 13 letter, Makita also called on NTI and KIA to stop any and all negotiations towards an Inuit Impact and Benefits Agreement with Areva.

Areva Canada had proposed to spend at least $2.1 billion to construct the mine, which has been at the exploration stage for decades.

The Kiggavik project was expected to be located at two sites, Kiggavik and Sissons, and consist of four open pits and one underground operation. It had an estimated lifespan of about 12 years with a three- to four-year construction period and a decommissioning and monitoring period of about 10 years.

The NIRB’s May 8 final hearing decision, letter to Valcourt, and press release are all available on the NIRB’s FTP site.