“If we turn resource development away, what are we going to do for our youth?” 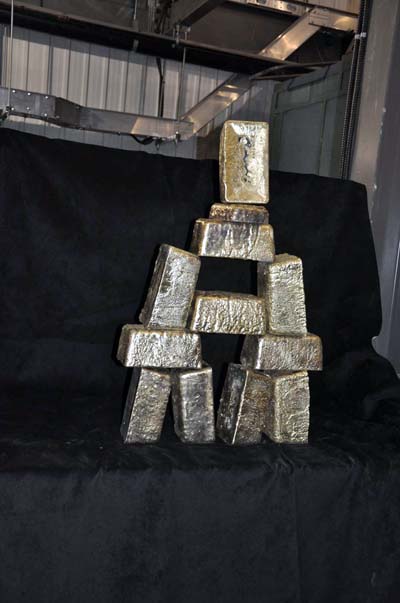 The finished product: gold bars at Meadowbank’s refinery are made into the shape of an inuksuk June 23. The mine expects to produce about 430,000 ounces of gold this year. (PHOTO BY SARAH ROGERS) 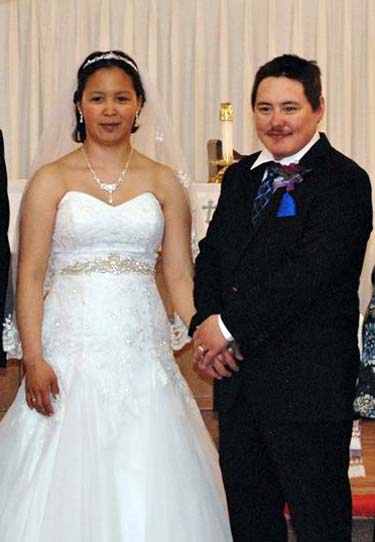 Corinne Putumiraqtuq, a housekeeper at Meadowbank married Joseph Otuk, a mine helper from Arviat, this past May. The couple lives in Baker Lake when they’re not working. (PHOTO COURTESY OF CORINNE PUTUMIRAQTUQ) 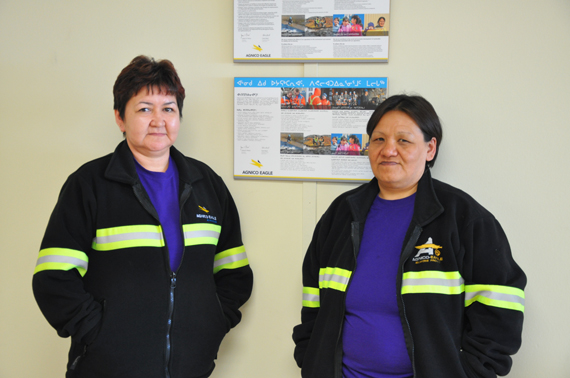 Mary Susan Tapatai and Winnie Aningaat, both from Baker Lake, work as housekeepers at Meadowbank. (PHOTO BY SARAH ROGERS) 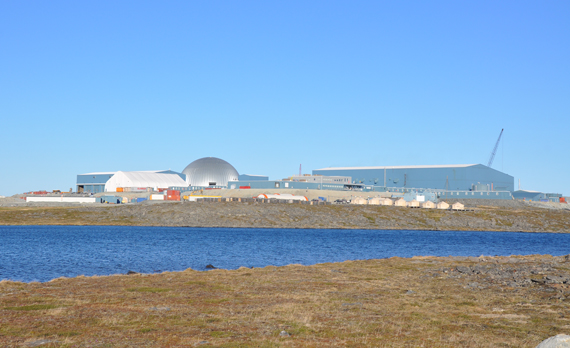 Meadowbank’s mine site houses its mills, processing plants and accommodations for its 480 employees. (PHOTO BY SARAH ROGERS)

BAKER LAKE AND MEADOWBANK MINE — The 110-kilometre drive between Baker Lake and Agnico Eagle’s Meadowbank gold mine follows the longest all-weather road in Nunavut.

But it’s a short trip between two very different worlds.

Mine Road, as it’s called, winds through rolling tundra and lakes, dotted with wildflowers, hares, siksiks, foxes and grazing muskoxen.

At kilometre 92, the landscape quickly changes as Agnico Eagle’s sprawling mine complex comes into view along the shores of Meadowbank lake.

Once on site, there’s a steady hum of activity needed to produce the 430,000 ounces of gold the company hopes to churn out in 2014.

Meadowbank doesn’t sleep: a day and night shift keep the mine site running 24-7, fueled by its 480 employees and about 14.2 million litres of diesel a year.

In nearby Baker Lake, where the local population is easily triple that of Meadowbank, the community feels much more relaxed. The waterfront is quickly melting in the June heat, as the town empties out on weekends as people go boating or hunting caribou.

Four years into production at Meadowbank, the community and mine have become interconnected in many ways.

Some fear that mining development has had a negative impact on the traditional community. Over the mine’s life, police have noted an increase in alcohol use and crime in the Kivalliq community.

Another more recent study showed that while the mine has brought more material wealth to Baker Lake, that wealth hasn’t been distributed equally.

Others say the mine’s work schedule has put a strain on family relationships.

“There really is no win-win,” said local businessman Peter Tapatai, whose expediting company is a life line between Baker Lake and the mine, shuttling local employees and goods to and from the site.

One of the community’s biggest challenges is not having a workforce in place to maximize benefits, he said.

“But if we didn’t have a mine, there’s be a substantial amount of unemployment here,” said Tapatai, who employs about 20 local people at his business.

“We’d depend so much on social assistance, which doesn’t do well for the self-esteem,” he said. “If we turn resource development away, what are we going to do for our youth?”

About 150 Baker Lake residents work at Meadowbank, making up roughly 63 per cent of all Inuit employed there.

On site, the hallways of the mine’s main residence fill with housekeepers each morning pushing carts of freshly-washed sheets and towels.

Housekeepers like Mary Susan Tapatai, from Baker Lake, are on their feet much of the time, cleaning up to 60 rooms a day.

“I enjoy it. And to be honest, it’s very hard to find work in Baker Lake,” said Tapatai, who was hired by Agnico Eagle in 2012.

Tapatai now works as the replacement leader of her work crew when her supervisor is away.

The work itself can feel far from the mine’s open pits, mills and refinery, where its gold bars are poured.

But Tapatai says if you can handle the two-week rotation, housekeeping is a great job.

“Those first few months, I wanted to give up and I really had to push myself,” said Corinne Putumiraqtuq, another housekeeper who calls Baker Lake home.

“I like cleaning, but it’s hard being away from family, when stuff is happening at home,” she said. “But there’s no other work that would pay as much as at home.”

In many ways, Meadowbank has become a home away from home for Putumiraqtuq since she started at the mine in 2010.

It’s where she met her new husband, Joseph Otuk, a mine helper at Meadowbank. The couple married in May.

Originally from Arviat, Otuk has since relocated to Baker Lake to live with Putumiraqtuq. The couple shares a room at Meadowbank; they’ve even talked about transferring to work at nearby Meliadine once Meadowbank closes in 2017.

Few people in Baker Lake talk about what will happen then, although most agree that Meadowbank will have a lasting impact, for better or worse.

“The population has grown a bit since the mine opened,” observes Tapatai, although she can’t say if the two are related.

“But I think Agnico Eagle has given a lot to the community,” she added, noting a recent community feast, a new baseball diamond and other events for local youth. 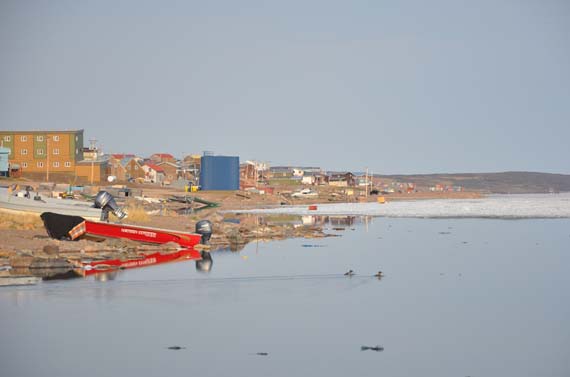 About 150 of Meadowbank’s employees are based in nearby Baker Lake, the largest source of Inuit employment at the mine. (PHOTO BY SARAH ROGERS)