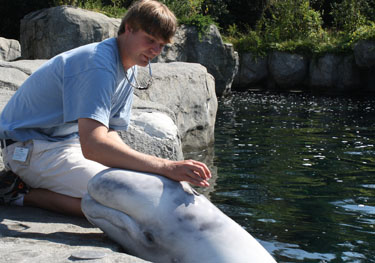 Richard, a graduate student at the University of Rhode Island, studies belugas.

“Essentially, I study whale snot,” said Richard. “I am hoping this will turn out to be a useful research method.”

The current method for getting information on live belugas usually involves firing a dart into the whales to obtain a tissue sample, while belugas in captivity, like those found at aquariums, are trained to lie on their backs and present their tails to a veterinarian, who draws a blood sample.

But Richard believes there’s a way that would be easier on belugas: simply collect the material, known as the exhale, sprayed out of a beluga’s blowhole.

Johnny Oovaut, chairman of the Nunavik Marine Regional Wildlife Board, says he has his doubts about the entire procedure.

“My question is, what is it they want to achieve by knowing all these things,” Oovaut said. “Is it for conservation purposes, is it because they are trying to make a law? What are they trying to find out?”

Oovaut pointed out that in recent years, conservation groups from the United States as well as the U.S. government, have pushed for restrictive conservation measures on several Arctic species, such as the polar bear, ringed seal and walrus.

Richard maintains his research is for the good of the species, and people like Oovaut, who depend on it for sustenance.

“Most of what we know about belugas we wouldn’t know without beluga hunters,” Richard said. “We have a lot of the same goals. We would both love to see that species continue to be successful and continue to be an indicator of the Arctic environment.”

Richard, who worked for 10 years as a beluga trainer at the Mystic Aquarium, in Mystic, Connecticut, said the goal of his work is to come up with a less invasive way of gathering information on the health and basic biology of belugas.

“It opens up more research opportunities if you don’t have to actually catch the animals in order to get samples,” said Richard.

If his method proves successful he hopes to eventually to try it out in the Arctic.

Richard said a good spot to carry out his work could be Cunningham Inlet, on Somerset Island, in Nunavut. There is a large population of belugas that summers there, and the Mystic Aquarium has a relationship with Arctic Watch, a wilderness camp located on Cunningham Inlet.

The plan: to collect the exhale samples from a fixed platform mounted in a section of the inlet where the whales tend to congregate.