Beverly caribou have been on the move, wildlife biologist says

The herd, now calving on the Queen Maud Gulf coast, is “robust” and not near extinction 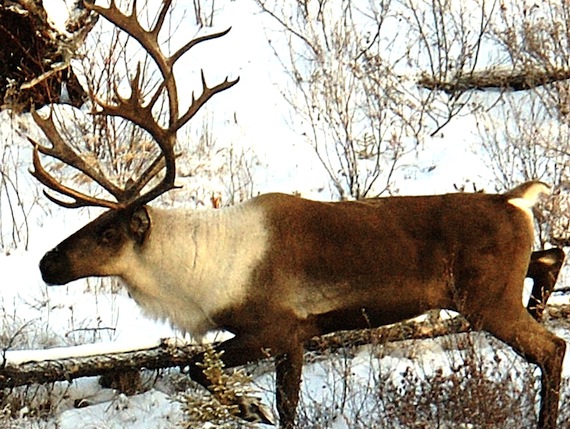 Biologists need to change how they define caribou herds, a wildlife biologist and researcher from the University of Alberta has concluded.

And more satellite tracking studies of caribou may prevent future confusion over the size and locations of caribou herds in the North, John Nagy says.

Satellite collars are the best way to track the day-to-day movements of some caribou in each herd over a number of years, he suggests.

But hunters and people who travel on the land remain “a very important source of information about the distribution and movements of caribou” — and with satellite tracking a recent development, biologists shouldn’t “make unquestionable rules about how they [caribou] behave.”

“People need to change the way they think about how caribou herds are defined ” Nagy said.

Nagy determined that the Beverly caribou herd didn’t disappear, as a 2010 survey appeared to show.

Instead, the herd had moved further north in Nunavut to calve near the western Queen Maud Gulf coast rather than at its “traditional” calving ground.

The Beverly herd’s range traditionally stretched from northern Saskatchewan and the eastern Northwest Territories into the Kivalliq region.

Spotters counted 93 females on the calving grounds, half the number recorded in the summer of 2007 and a huge drop from the 5,737 females counted in 1994.

But, based on his analysis of satellite collar data obtained between 2006 and 2009, Nagy found the Beverly caribou were calving near the western Queen Maud Gulf coast to the north of the herd’s “traditional” calving ground in the Gary Lakes area north of Baker Lake.

That also confirms the traditional knowledge of elders who maintained the herd simply relocated.

The Bathurst herd made a similar shift in calving ground use from an area east to one west of Bathurst Inlet (a distance of about 250 kilometres) by 1996.

However, as a result of the belief that migratory barren-ground caribou do not change use of or abandon their calving grounds, biologists and wildlife managers assumed the Beverly herd was in trouble.

“Recognizing that shifts in calving ground use may occur ensures that we do not automatically assume that subpopulations (or herds) have declined to extinction because they no longer calve on what is believed to be their “traditional” calving ground,” Nagy’s research study says.

Satellite tracking studies to document movements of caribou on the Beverly winter range and in the Queen Maud Gulf area started only in the early 2000’s.

But for his study, Nagy analyzed data for 510 barren-ground caribou tracked with satellite collars in the Northwest Territories and Nunavut from 1993 to 2009.

Nagy’s analyses indicate that the Ahiak herd, as described in the late 1990’s, never existed.

In Nunavik, home to the largest caribou herds in Canada, Quebec recently promised “very stringent management” of the Leaf River herd after a recent salving ground survey said the herd was in a “decreasing phase.”

That conclusion goes against the observations of outfitters and hunters who say caribou in Nunavik the caribou have simply changed their movements.