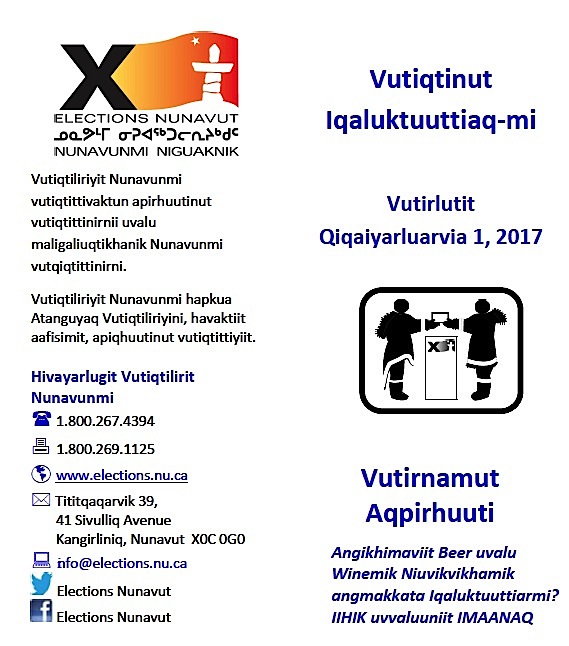 Voters in Cambridge Bay will have access to information, like this brochure, about the May 1 beer-wine store plebiscite in Inuinnaqtun. You can also go to the Elections Nunavut website at www.elections.nu.ca for more information in English and Inuktitut.

If you’re at least 18, a Nunavut resident and have lived in Cambridge Bay or Rankin Inlet for 12 months, you can vote today in advance polls for the May 1 plebiscite on whether you favour the opening of beer-wine stores in your community.

But before you mark your ballot—on April 24 or May 1—take some time to mull over the issue, suggests Cambridge Bay MLA and Nunavut Justice Minister Keith Peterson, who is also Nunavut’s minister responsible for the liquor commission.

“People need to ask the questions and ask amongst themselves what the pros and cons are,” Peterson said. “You want to make choices.”

Among those, Peterson said there’s a major one: “Do you want to see bootleggers continue?”

Advance polls for the May 1 plebiscites, in which voters will mark their ballots ‘Yes’ or ‘No’ to the following question: “Are you in favour of a beer and wine store opening in the Municipality of…,” are open April 24 at the Rockland Building in Rankin Inlet and at the Curling Lounge in Cambridge Bay, from noon to 7 p.m.

Voters with mobility issues may cast ballots in mobile polls on the morning of April 24.

And if you can’t vote on these dates, you can also apply to Elections Nunavut to vote by special ballot.

The plebiscites are non-binding. And, a week before plebiscite date, the results of the vote—at least in Cambridge Bay—appear to be in no way a foregone conclusion.

During an April 19 town meeting on the upcoming plebiscite in Cambridge Bay, Peterson spoke about the “Let’s Be Aware” campaign, released last month, which promotes the responsible use of alcohol in Nunavut.

Among the points raised by those at the meeting: whether freer access to alcohol, through a beer-wine store, could normalize the drinking of alcohol and discourage binge drinking or lead to more problems.

“What people are telling me is no surprise,” Peterson told Nunatsiaq News. “We’ve had a long history with alcohol in Cambridge Bay. We had a civilian and military bar, the Nanook curling club, a beer line, so we’ve had a long association with alcohol—and people have died, physically, through passing out in the streets in wintertime and [there’s been] a lot of violence.”

Some at the meeting said the opinions of Inuinnaqtun-speaking elders, who may not have known the town meeting was taking place, should have been heard, although Peterson did meet with the elders the following day.

Opinions on the plebiscite and the impact of alcohol in the western Nunavut community of about 1,700 continue to circulate.

“Whatever you vote YES or NO please vote use your voice start the conversation. May 1st shouldn’t be the end of this conversation it should be the beginning for a call to action,” said Christine l’Heureux on the Cambridge Bay Facebook news page.

“The outcome of the upcoming plebiscite in town, be it a yes or no, DOES NOT change the current impact of alcohol and that addiction in our community… We as a community need to get rid of the stigma of getting help. It is alright to ask for help.”

If voters support the establishment of a beer-wine store in Cambridge Bay, the store would not open until 2018. That’s because there’s no liquor warehouse, as in Iqaluit or Rankin Inlet, so detailed planning would be required to establish the store, Peterson said.

Iqaluit residents overwhelmingly said yes in April 2015 to the idea of a strictly controlled beer-wine store in the city. Peterson said that store is now set to open this July.

The outlet in Iqaluit will require residents to set up a permanent account at the store through which they can purchase one case of 12 beers and two bottles of wine per day.