Free screening at the Astro Theatre set for Oct. 29 in Iqaluit 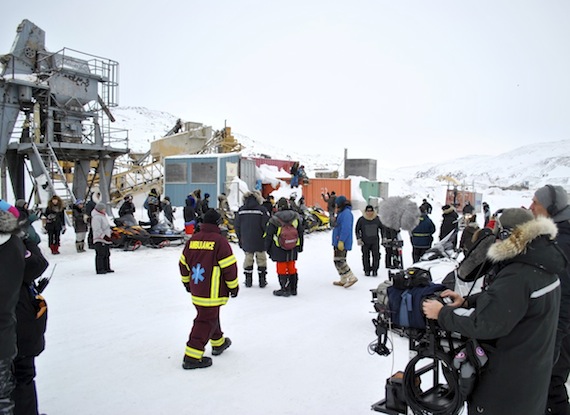 Production crews line up actors and extras for a drag-racing scene in the feature film Two Lovers and a Bear at the old metal dump in Iqaluit in 2015. Producers invited residents out for a chance to appear as a crowd of drag-race watchers at the edge of the city. (FILE PHOTO)

How to make life and love work in a small, remote Arctic community.

That’s the focus of Two Lovers and a Bear, a film, which the title suggests, is a big love story—and an adventure film.

And don’t forget about magic realist fantasy, in the form of a talking polar bear.

Now the film is coming to Iqaluit this weekend for its northern premiere.

“We are so happy to finally bring the film back to Iqaluit,” producer Roger Frappier said this week in a news release.

Two Lovers and a Bear was shot in Iqaluit and Apex in 2015.

It was the biggest budget feature film ever shot in Nunavut, with a 30-day shoot and budget of $7.8 million.

“We really wanted to make this movie in the Arctic, there is no place on earth like it,” said director Kim Nguyen in the release. “We love the light and the ice and the tundra and the people are so great.”

A reception for the more than 100 Iqaluit residents who were involved in the film’s production follows the screening.

These include filmmakers Shawn Innuksuk and Vincent Desrosier, who were part of the camera crew led by cinematographer Nicolas Bolduc. Innuksuk’s photographs of northern lights were also featured in the film.

One of the film’s principal leads is Kakki Peter who plays the the fictional town’s sheriff.

Most of the stunts were performed by Iqaluit residents including Christine Lamothe, Stephen Bathory and Albert Netser.