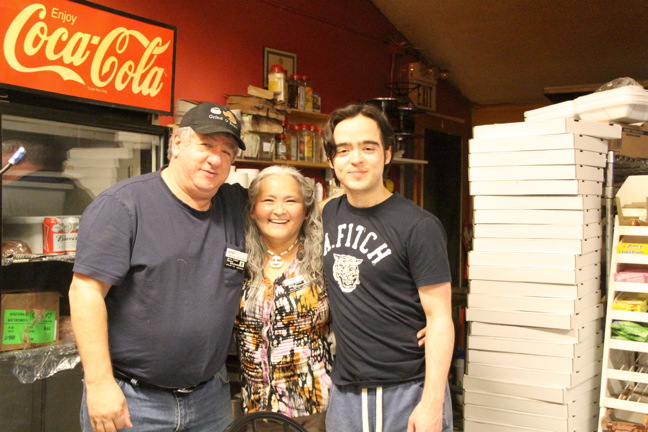 Elisapie Sheutiapik, the MLA-elect for Iqaluit-Sinaa, with her husband Brian Twerdin and her son Iola, at the Grind & Brew “election headquarters” in Iqaluit Oct. 30. (PHOTO BY BETH BROWN) 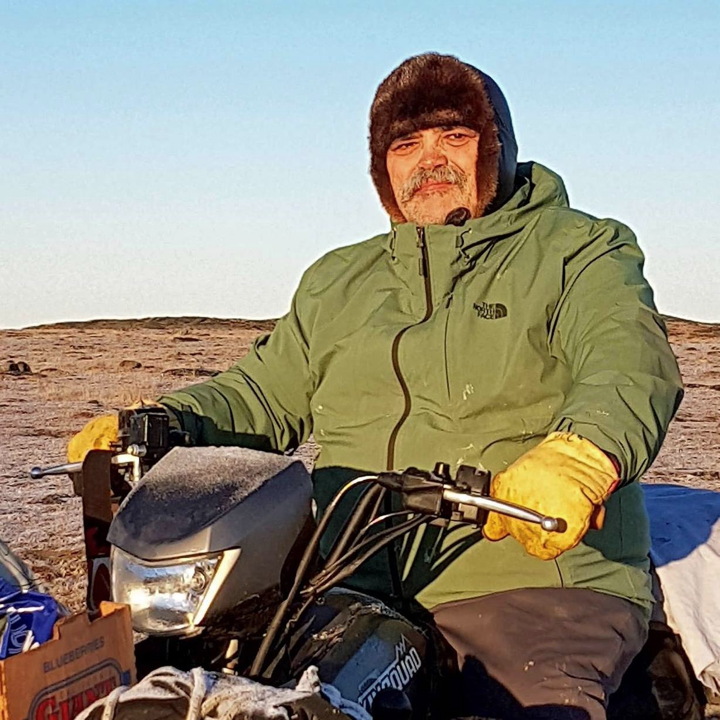 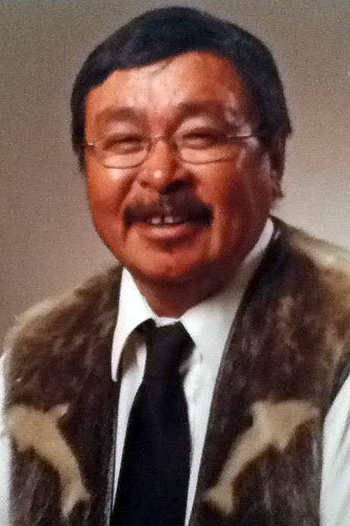 Pauloosie Keyootak will return to the legislature for Uqqumiut. (FILE PHOTO) 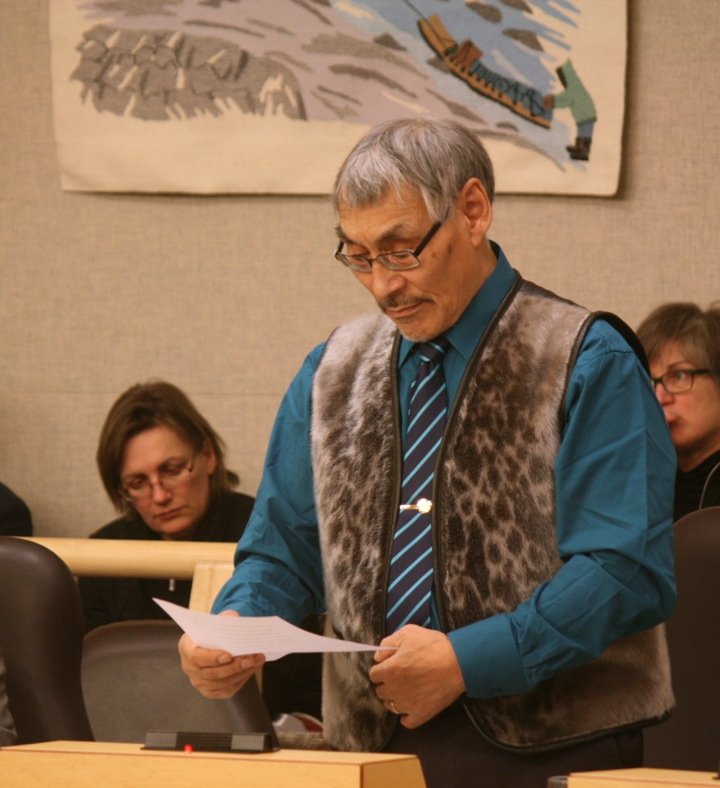 Emiliano Qirngnuq will return to the legislature as MLA for Netsilik. (FILE PHOTO)

It took nearly an hour for the first polling results of the 2017 Nunavut election to roll in after polls closed throughout the territory, but by 10 p.m. Oct. 30, at least some candidates appeared to be on their way to the Nunavut legislative assembly in an election that saw eight incumbents defeated and six women, a record number, become MLAs.

Lorne Kusugak, who had tied with incumbent Alex Sammurtok in the 2013 election for Rankin Inlet South and lost in a run-off byelection, came out on top this time.

With three polls reporting at 9:50 p.m., the unofficial results showed Kusugak with 309 votes to Sammurtok’s 136.

“I had a good team, I talked to a lot of people and I got a lot of advice. The community kept telling me they wanted a strong voice. That’s why they said they were going to vote for me,” Kusugak told Nunatsiaq News, just moments after final votes were tallied. He was at home, surrounded by friends and family.

So, what does he plan to do first?

“I have to slow down for a while just to take it in,” Kusugak said. “This is just a start.”

Kusugak said he is grateful for the support he received. “I have a lot of work ahead of me. I really hope the electorate in Rankin South, and the whole community, will be able to tell me what I need to do and let me know when I need to do more.”

In the neighbouring riding of Rankin Inlet North-Chesterfield Inlet, Cathy Towtongie, with 171 votes, defeated incumbent Tom Sammurtok, who finished with 93.

Tununiq incumbent MLA Joe Enook was also out ahead of rivals David Qamaniq and Jeannie Mills by 10 p.m. with two polls reporting. Unofficial results pointed to a win for Enook, who took the Tununiq riding in a byelection in 2011 and was elected again in 2013.

“I’m honoured and humbled at the moment,” Enook said, reached at his home in Pond Inlet where cheers could be heard in the background as, presumably, family and friends reacted to the election results as they were broadcast in the home.

“I’m going to fight the good fight for the community of Pond Inlet and the Tununiq constituency,” Enook said, adding his first priority for his constituents will be to continue focusing on housing issues and establishing Pond Inlet as a hub for the High Arctic.

In Quttiktuq, where nine candidates hoped to win in the High Arctic, veteran civil servant David Akeeagok, with 189 votes, took the seat from incumbent Isaac Shooyook, who at age 79 had been the assembly’s oldest MLA.

In Uqqummiut, which comprises Clyde River and Qikiqtarjuaq, the vote is often split between those two communities.

Pauloosie Keyootak, the Qikiqtarjuaq-based incumbent, will return to the legislature after taking 235 votes, mostly out of Qikiqarjuaq.

In the Netsilik riding, incumbent Emiliano Qirngnuq will return to the legislature, beating out his only opponent, Joe Tulurialik, by 310 votes to 141.

Elected to less than a two-year term in a byelection where he replaced Jeannie Ugyuk, Qirngnuq said he learned “a lot of things” about politics during his first term as Netsilik’s elected representative.

Now, with a full term ahead of him, Qirngnuq said his goal will be “to finish what I started.”

It was a close three-way race in Hudson Bay but Allan Rumbolt will head back to Iqaluit for a third term.

Rumbolt said he was anxious during the day and when the polls closed, “I wasn’t totally sure which way it was going to go.” But he said he’s “ecstatic and happy that I made it in again.”

Rumbolt spoke from his home in Sanikiluaq on the Belcher Islands where the wind was blowing at 100 km/h late on Oct. 30 and where he was obliged to keep checking on his boat “to make sure it hasn’t blown away.”

Rumbolt added that his first priority, when he returns to the legislature, is to get to know some of the new people elected.

George Hickes, a high-profile minister in Premier Peter Taptuna’s cabinet, has returned as one of four MLAs in Iqaluit, beating out his only opponent, Jacopoosie Peter, 350 votes to 77.

“I’m feeling pretty good,” said Hickes, reached at his Iqaluit-Tasiluk home at around 11:30 p.m. where he was watching the election results come in with family and friends at his side.

Hickes said he ran a hard campaign from the start, and that door-to-door visits with constituents left him with “a lot of pride” from the voter’s recognition of his efforts during his first term.

Hickes said he has “a lot of interest” to go back into a cabinet position.

Just before midnight, it was clear that first-time candidate Joelie Kaernerk of Hall Beach had won the Amittuq seat, one of the election’s largest races with seven candidates.

With 418 ballots cast, Kaernerk had taken 115 votes followed by Paul Haulli with 84. Incumbent George Qulaut, the Speaker in the last legislature, came in third with 69 votes.

“I’m thrilled. I’m alive!” an excited Kaernerk told Nunatsiaq News. He said running against Qulaut was “kind of nerve-racking” but he feels his honesty has paid off.

“I was being honest about my campaign, that was my strategy.”

He said he plans to focus on economic development, health and education.

“My first priority is the youth and the elders. That was my strategy and they will be my priority.”

Kaernerk wanted to send his best to all the other candidates who ran in Amittuq.

“Now that we know the results it’s time to show some unity and support and to work towards the future in building our communities,” he said.

“I greatly appreciate my constituents for voting for me. I will show my commitment towards both communities.”

Around midnight, Elisapie Sheutiapik emerged as the winner in Iqaluit-Sinaa, unseating incumbent Paul Okalik in one of the election’s most dramatic upsets.

Reached just after midnight, the Iqaluit businesswoman, former Iqaluit mayor and president of the Qulliit Nunavut Status of Women Council said the “real hard work is going to begin soon.

“Now I can be a voice that’s heard as an elected official, it’s a different feeling,” Sheutiapik said, adding that the moment is “bittersweet.”

In an all candidates debate last week, Sheutiapik called her constituents the forgotten people of Iqaluit. “The reason why I chose to run in this riding is because my people live in this riding,” Sheutiapik told Nunatsiaq News earlier in the evening on election night. “To see them in some of the worst conditions possible hurts. I love my people.”

“Now the interesting part comes,” she said after learning the results. Sheutiapik said she plans to represent her constituents on campaign issues such as affordable housing, job training and education, and mental health.

Incumbent Pat Angnakak got a run for her money from opponents Franco Buscemi and Anne Crawford but won the seat in the end with 231 votes to Buscemi’s 196 votes and Crawford’s 134.

“I’m good, thank goodness, I’m very relieved,” Angnakak told Nunatsiaq News shortly after the final polls were announced. “It was a close campaign and I’m just very happy that it’s over with and that I can get on with the things I want to do.”

She said one bonus for constituents, when they elect an incumbent MLA, is that the member can hit the ground running. “I have that advantage,” she said.

She called the campaign process a “roller coaster.”

“I think one always worries, you don’t know how anything is going to turn out.”

She offered many thanks to her constituents for trusting her enough to give her another four-year mandate.

She also thanked her family and her campaign team who, along with her constituents, make up the supportive team that she needs.

“They all worked together to get me back in my seat as MLA for Iqaluit-Niaqunnguu,” Angnakak said.

Another MLA also went down in Arviat North-Whale Cove where John Main took the riding from the incumbent George Kuksuk, with four out of five polls reporting.

Next door in Arviat South, Joe Savikataaq, who served as minister of community and government services under the last government, won his seat back.

Voters in Baker Lake also returned incumbent MLA Simeon Mikkungwak to the legislature, though only after Elections Nunavut had posted in error that his only opponent, Karen Kabloona, had won. The numbers were quickly switched to show Mikkungwak was in fact the winner.

And in Cambridge Bay, there was only a nine-vote difference between Jeannie Hakongak Ehaloak and Pamela Gross. The final tally from the three polls showed Ehaloak with 259 votes and Gross close behind with 250.

Because the difference was less then two per cent, the returning officer for Cambridge Bay will apply for a judicial recount, Elections Nunavut said.

With two of five polls reporting in South Baffin, at one point in the evening, there was a tie between incumbent David Joanasie and Michael Salomonie, who each had 61 votes. But later, with all polls reported, Joanasie had won, 318 votes to 201.

And in one of the last ridings to report early Oct. 31, voters in Aggu re-elected MLA Paul Quassa, who most recently served as minister of education.

You can view all the unofficial results at the Elections Nunavut website.

The new MLAs-elect will gather in Iqaluit Nov. 7 for orientation sessions. The legislative assembly’s sitting calendar has Nov. 17 marked off as their tentative date for holding a leadership forum to choose a speaker, premier and cabinet.

The first sitting day of the fifth legislative assembly is tentatively set for Nov. 21.