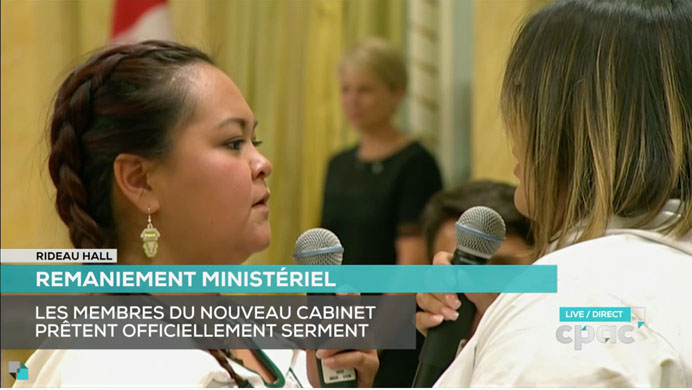 Declaring that “existing colonial structures” do not work, Prime Minister Justin Trudeau announced Aug. 28 that the federal government department known as Indigenous and Northern Affairs Canada will be dissolved and replaced by two new entities to be handled by two cabinet ministers.

“I’m tremendously excited by this meaningful step,” Trudeau told reporters at a web-streamed news conference in front of Rideau Hall.

Carolyn Bennett, who has been known since the fall of 2015 as the minister of INAC, gets a new job title: minister of Crown-Indigenous Relations and Northern Affairs.

At the same time, Jane Philpott, who until Aug. 28 served as national health minister, moves to a new portfolio: minister of Indigenous Services.

Philpott’s task will be to oversee the services that Ottawa still delivers directly to many Indigenous peoples, especially First Nations.

The INAC department is a colonial structure that was designed primarily to implement the Indian Act, “a colonial, paternalistic law,” a statement from the prime minister’s office said.

And INAC’s current structure does not meet the needs of Inuit and Métis, the PMO said.

“INAC was also not designed or conceived of to support and partner with Inuit and Métis peoples, based on their unique histories, circumstances and aspirations. To put it plainly, the level of the ambition of this government cannot be achieved through existing colonial structures.”

Right now, it’s not clear what this means for Nunavut and other Inuit regions, where most government services are delivered by territorial and regional governments and not directly by Ottawa.

Trudeau’s restructuring moves follow a recommendation from the 1996 report of the Royal Commission on Aboriginal Peoples that called for the INAC department to be split into two entities, one to handle the services the department provides directly to Indigenous peoples, and the other to handle Indigenous rights matters and northern issues.

“We agree with the Royal Commission that rights recognition must be an imperative, and that is why today we are announcing the dissolution of INAC,” Trudeau said.

And Trudeau said these structural changes will be completed “in cooperation with Indigenous peoples.”

At a news conference held after the announcement, Trudeau said this means the government will hold extensive consultations as it moves through the restructuring process.

“This dissolution of INAC will be staged,” Trudeau’s office said.

A key part of Bennett’s new mandate will be to lead a consultation process on how to replace INAC with two new departments, Trudeau’s office said.

At the same time, Philpott will focus on improving the quality of day-to-day services provided to First Nations, Inuit and Métis.

“A rigorous results and delivery approach will be adopted, focused on improving outcomes for Indigenous peoples.”

Philpott’s Indigenous Service department might also take on functions transferred to it from other federal departments, such as health care delivery, the PMO said, and that eventually , service delivery will be done by Indigenous peoples as they move toward self-government.

The changes will also require legislative amendments, the PMO said.

Hehr will now become minister of Sport and Persons with Disabilities.

And Carla Qualtrough, until now the sports minister, becomes minister of Public Services and Procurement Canada.

Judy Foote, the MP who had been handling the PSPC portfolio, stepped aside this past April to deal with a family health crisis. Industry Minister Jim Carr had been filling in for her temporarily.