“We have yet to make a commercial discovery” 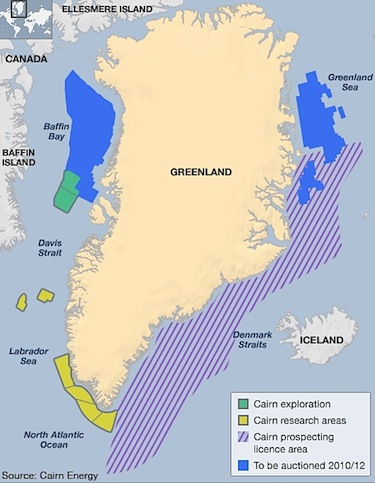 This map shows the location of Cairn’s blocks off the coast of Greenland. (IMAGE COURTESY OF CAIRN ENERGY)

After spending $1 billion looking for oil off Greenland, Cairn Energy has come up dry.

The company has plugged its two remaining wells off the coast of western Greenland, without finding any signs of the substantial oil reserves thought to lie off Greenland.

“The first phase of Cairn’s exploration programme in Greenland has encountered oil and gas shows across multiple basins and now reservoir-quality sands in the Atammik block. Whilst we have yet to make a commercial discovery, we remain encouraged that all of the ingredients for success are in evidence, said Cairn’s chief executive Simon Thomson in a Nov. 30 statement.

Cairn drilled five wells and spent $600 million in 2011, with the hope of tapping into a large oil or gas find.

In the Atammik block, 202 kilometres offshore Nuuk, Cairn has now plugged and abandoned the well.

That well had encountered some “reservoir quality sands” there, but the company couldn’t fully evaluate the samples due to “mud losses and poor hole conditions.”

In an earlier update, the company said the Leiv Eiriksson rig had found those sands — which could signal the presence of a marketable amount of oil — after drilling down in 909 metres of water.

The company said it found traces of both oil and natural gas in the mud, which was pushed to the surface during the drilling.

Cairn tired to stiffen the sides of the drill hole to bring up samples of the sand to analyze.

But samples examined at the rig revealed only mud filtrate and failed to establish hydrocarbons, Cairn said Nov. 8.

These samples will undergo more testing, and Cairn said Nov. 30, will try to “confirm the origin of the hydrocarbon shows.”

That well reached down 4,847 m and encountered “minor hydrocarbon shows.”

But it’s now been plugged and abandoned.

Cairn said that it plans to pull back and evaluate its results from the past two years.

The company may conduct additional seismic mapping in 2012 and conduct more drilling in the West Greenland basins in subsequent years.

But reports suggest that the company, which owns 11 blocks off Greenland, may look for a partner to continue its exploration.