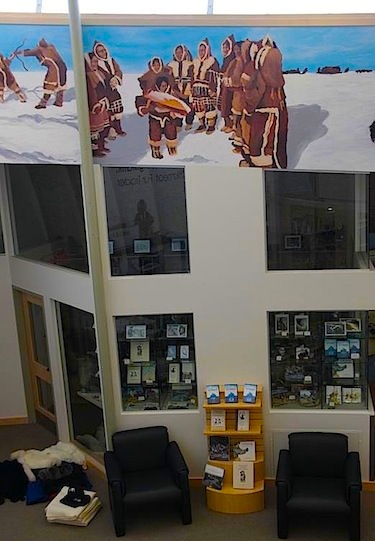 The finished mural overlooks the ground floor of the May Hakongak Library and Cultural Centre in Cambridge Bay. (PHOTO COURTESY OF THE KITIKMEOT HISTORICAL SOCIETY) 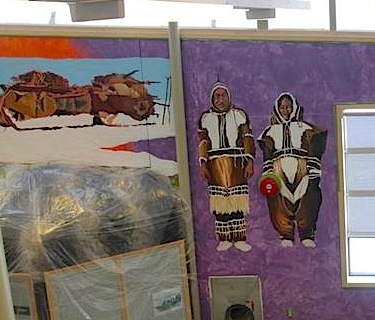 Here’s what the finished section of the mural looks like. 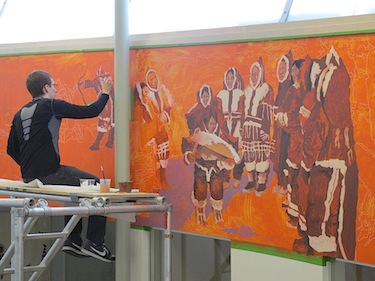 Ryan Gillis sits on a scaffold to paint in parts of a scene on the new mural at Cambridge Bay’s May Hakongak Library and Cultural Centre. (PHOTO COURTESY OF THE KITIKMEOT HISTORICAL SOCIETY) 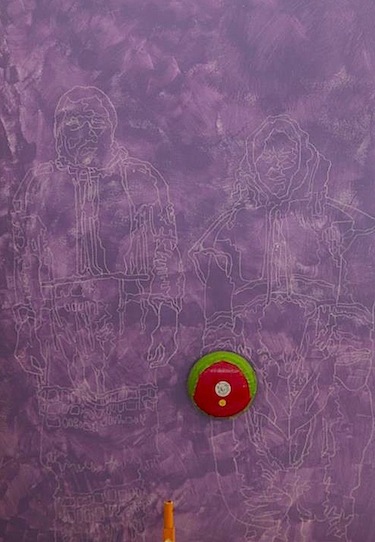 Here’s how the chalk outline looked before artists filled it in. (PHOTO COURTESY OF THE KITIKMEOT HISTORICAL SOCIETY) 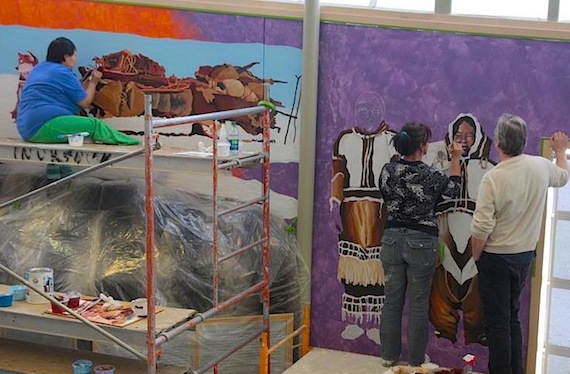 Mural artist Ele Davis from Calgary, centre, works with local artists on a mural in Cambridge Bay’s May Hakongak Library and Cultural Centre which commemorates the 100th anniversary of the Canadian Arctic Expedition. (PHOTO COURTESY OF THE KITIKMEOT HERITAGE SOCIETY)

When you walk into the May Hakongak Library and Cultural Centre in Cambridge Bay, a vista of the Coronation Gulf’s history awaits you.

A striking five-foot-wide mural, commemorating the 100th anniversary of Canadian Arctic Expedition, wraps 87-feet around the top of the facility.

The mural provides a vivid glimpse what life was like in this part of the Arctic when the expedition took place from 1913 to 1916 to explore the western Arctic.

Among the brightly-painted images on the mural: Inuinnait dressed in elaborate caribou-fur outfits, a group drumming, scenes of hunting, fishing and working with furs, along with depictions of muskox and other animals, and flowers like the purple saxifrage that covers the land in the summer.

Many of these images are familiar to people in Cambridge Bay.

That because their relatives can be seen in some of the images that were inspired by now-iconic photographs, taken by Diamond Jenness.

Jenness, an anthropologist, lived with the Inuinnait or Copper Inuit in Bernard Harbour during the Canadian Arctic Expedition from 1913 to 1916.

There, Jenness completely immersed himself in every aspect of the Inuinnait culture. He learned how to speak Inuinnaqtun and to make tools, hunt, fish, and travel on the land by dog team.

Jenness and the Inuinnait formed very close relationships based on mutual respect and trust.

And he was even adopted by Ikpakuhak, a respected hunter, and his wife Higilaq, a shaman, relates Renée Krucas, manager of the May Hakongak centre.

But Jenness continued to worry about the continued survival of indigenous peoples in North America, writing in 1932, that “doubtless all the tribes will disappear.”

“Some will endure only a few years longer, others, like the Eskimo, may last several centuries. Some will merge steadily with the white race, others will bequeath to future generations only an infinitesimal fraction of their blood. Culturally they have already contributed everything that was valuable for our own civilization beyond what knowledge we may still glean from their histories concerning man’s ceaseless struggle to control his environment.”

“His style of anthropology was to preserve and protect,” reflected Krucas. “If we have all of the amazing information [about the Inuinnait] today, it’s because of what he did.”

The mural is intended to commemorate that collaboration between Jenness and the Inuinnait and their shared desire to preserve Inunnait culture, Krucas said.

The mural project received money from Canadian Heritage and the Government of Nunavut, along with loans of scaffolding from local construction businesses.

These enabled mural artist Ele Davis from Calgary and local artists to work from high above the centre’s floor.

But the job of the transferring the images to that space was no easy task: first Davis traced the photos taken by Jenness and others who went on the Arctic expedition. Then, these images were projected on to the treated wall, where the outlines were drawn in chalk and then, finally, painted in.

The finished result stops many visitors to the library and centre in their tracks, especially elders, Krucas said, who can recall some of the people who were in the original photos.

In January 2013 — a century after the start of the Canadian Arctic Expedition — the mural will have its official launch, she said.

As for Jenness, he’s also remembered in other ways: in 1978 the Canadian government named the middle peninsula on the west coast of Victoria Island for him, and in 2004 his name was used for a rock examined by the Mars exploration rover Opportunity.