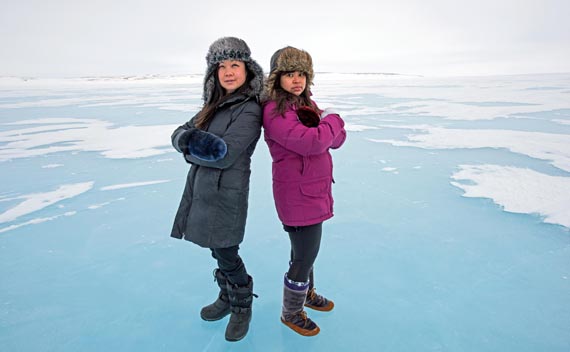 Gloria Guns and Christine Aye made up the Cambridge Bay synth-pop duo Scary Bear Soundtrack, who were the top Nunavut act to emerge from CBC’s Searchlight music competition. (PHOTO BY DENISE LEBLEU IMAGES)

There aren’t many venues in the western Nunavut community of Cambridge Bay for musicians to perform live shows.

“But that doesn’t mean they isn’t anywhere to play,” said local musician and songwriter Gloria Guns. “We’re basically trying to find our own opportunities in the community.”

Guns and Christine Aye, who make up the synth-pop duo Scary Bear Soundtrack, have been known to push back couches in their Cambridge Bay living rooms, serve tea and goodies and use their sun lamps as stage lighting.

From their homes in the Kitikmeot community, the women have grown a local following that has stretched out across the country, in large part thanks to social media.

Scary Bear Soundtrack grew enough of a following this year to emerge as the top Nunavut act in CBC’s Searchlight music competition, as the duo moves on to face new musical talent from across the country.

Their track “Longest Night” is an ode to Arctic winters, where some communities don’t see the sun rise above the horizon for weeks, even months, each year.

“[Winter] can be a tough time of year — you don’t have a lot of energy and the other way we find we get through is by sticking together,” said Guns. “The song is a metaphor for survival in the North.”

The track was also inspired by a story a local elder recounted about his son and grandson whose snowmobile broke down on the land one winter, where they stayed for three days until they were rescued.

But the Longest Night is nonetheless upbeat, an atmospheric synth-pop sound reminiscent of the 1980s.

Scary Bear Soundtrack is only recently northern — the band originally formed in Ottawa and was named when a group of friends discovered a mangy old teddy bear that had been stored away in an attic for decades.

When lawyer and Ottawa native Gloria Song, 29, (whose performs under the name Gloria Guns) took a job in Cambridge Bay last year, she discovered a musical connection with Aye and revived the project.

Aye, 26, a community justice outreach worker, used to be a singer in a metal band in her native Myanmar before moving to the Canadian Arctic.

Aye and Guns are currently working on an album alongside Ontario musician Charles Lynch, who goes by the stage name Avid Napper.

The duo credit their success in CBC’s Searchlight competition to their efforts to get the word out on social media.

Votes from across the country help push Scary Bear Soundtrack on top of popular Nunavut performers like Iqaluit’s The Trade-Offs, Igloolik’s Northern Haze and up and coming Arviat singer Calvin Pameolik.

“There were a total of 11 groups from Nunavut [in the competition] and I’m so impressed by the genres of music coming out of the territory,” Guns said.

Now, Scary Bear Soundtrack is competing locally against local talent from each of Canada’s region, from which the top ten national groups will be chosen by a mix of votes and celebrity judging.

Update: Scary Bear Soundtrack made it through to Searchlight’s top 10. You can vote for the them here.