Camo on the tundra: a visit to Op Nanook in York Sound 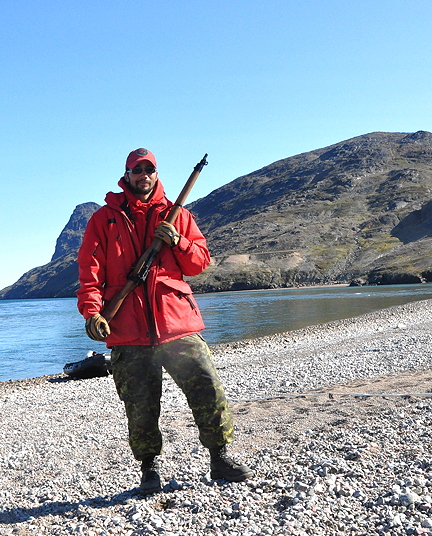 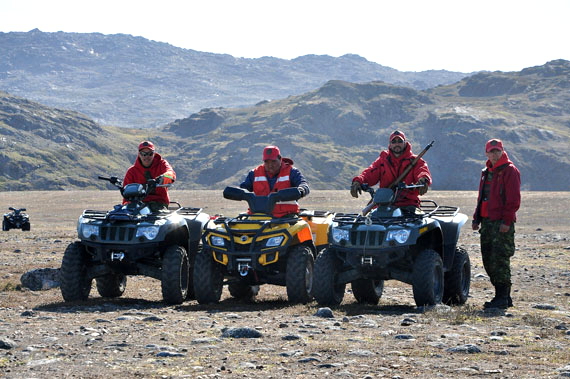 About 30 Canadian Rangers from the Baffin region have been participating in Operation Nanook at York Sound, said Ranger Trevor Nangmalik, second from right. Among their duties is 24-hour predator patrol along the perimeter of the seaside plateau. (PHOTO BY THOMAS ROHNER)

The privately owned helicopter, chartered by Canada’s armed forces and carrying four members of the media, made good time on a clear, sunny day over Frobisher Bay Aug. 27, hugging the coastline on its way to York Sound.

We were on our way to a military camp, located about 175 kilometres outside Iqaluit, set up as part of Operation Nanook, the military’s annual Arctic sovereignty exercise.

At an altitude of 3,000 feet, with a dazzling view of the bay — dotted with oblong rocky outcrops and the odd ice floe — it was a smooth ride with very little turbulence.

The pilot maneuvered the helicopter closer to the shoreline, losing some altitude, where the endless rolling hills of rock suddenly gave way to sheer jagged cliffs.

He wanted to show us a waterfall that ran off a glacier. As we neared the glacier, turbulence increased.

“Aw, this is nothing,” Adams said. “But like usual, the glacier’s making its own weather system.”

The waterfall was shrouded by the only cloud on the horizon.

We resumed our course for York Sound.

Back in Iqaluit, before takeoff, Adams had given us a stark and graphic safety briefing.

“If something horrible like a crash happens, please don’t leave me in the helicopter,” he said. “Rescue me. Even if my legs are gone, I’m on fire or unconscious — whatever — please save me. I wouldn’t leave you in there. Nobody should be left in the helicopter if we crash, OK?”

He explained the headsets would allow us to communicate with one another while in transit.

“You military folk don’t like to talk much, I know, but you’re allowed to talk. You can just talk normally through the headsets,” Adams said.

Most of us, including reporters, were silent for the trip though, perhaps preoccupied by the views and the novelty of the ride.

Adams filled some of that silence. When asked if he’d flown in the Baffin region before, he replied he had, many times.

The entertaining chopper ride was one of the highlights of this generous, albeit sterile and well-orchestrated, military-escorted tour of York Sound.

Shortly after media personnel exited the helicopter at York Sound — the pilot indulged cameramen by hovering above the camp for aerial shots before landing — they were met with the smell of frying bacon which wafted between rows of tents in the mid-morning sunshine.

Groups of soldiers in camouflage loitered throughout the camp. Some stood in small groups, talking, smoking cigarettes. Some reclined on the ground to soak up the sun.

Neatly stacked piles of dark green backpacks lay in clusters on the ground. All-terrain vehicles buzzed around the camp, and there was an almost constant coming-and-going of helicopters and twin otters.

“I had a sausage breakfast this morning,” a search-and-rescue technician said when asked about the smell of bacon. “They’re our rations.”

The meals are loaded with energy and fat and can last for months at a time, he explained. During the two-week selection camp to become a SAR tech, participants ate those rations every day, he said.

“They worked us hard, so I needed that energy and fat, but, still, you gotta be careful.”

On either side of the cluster of tents, standing 15-20 metres away, were a few booth-like structures, similar in material to the tents.

“Those are our latrines,” a military public affairs officer said. “We want to have zero impact on the environment here.”

Bright blue plastic barrels sat beside the tent latrines. Waste from the latrines goes into a bag system, the officer explained, and those bags are deposited into the blue barrels.

“The rangers have been helping out with that,” he said. “But they do a lot of other stuff too.”

The majority of the 32 rangers helping out at York Sound are from the Baffin region, one ranger estimated.

One of the younger rangers, Trevor Nangmalik, was among the first to arrive at York Sound for Operation Nanook.

“We’ve been here way longer than anybody else,” he said, “because there were five of us deployed first to start setting up. So it’s about two weeks and two days, probably.”

Nangmalik, originally from Hall Beach, lives in Iqaluit now and has been a mechanic for the Rangers for nine years. He works as a corrections officer and youth worker at a halfway house in town, as well as for a snow removal and sealift company.

The main job of the rangers at York Sound is to carry out predator patrol along the perimeter. They do that in two daily shifts, Nangmalik said — a day shift and a night shift.

They’ve seen a few polar bears so far, he said, including a mother and cub. He suspected they might have been attracted to the caribou he shot shortly after arriving.

“We spread the meat out on the ground, covered it with a tarp so the ravens wouldn’t get it, and it’s still fresh,” Nangmalik said. “I’ve fed all the rangers with the caribou,” he laughed. A few more caribou have been shot since.

The Rangers drove media down to the beach on their ATVs where a tent and small encampment was set up to serve as the command centre for Op Nanook’s mock emergency scenario—a grounded cruise ship about a kilometre off shore.

The military public affairs officer told us in the morning that, if we were lucky, we’d see some of the 50 actors, hired to feign injury, brought ashore from the ship and transported to triage tents in the main camp. Some of them would be transported to the hospital in Iqaluit, she said.

But we weren’t lucky. It was quiet down on the seashore. A handful of participants in Operation Nanook — including a man with a “coroner’s” armband — milled about, near a tent.

After a few minutes we rode back up to the camp and piled into the chopper for our return flight. 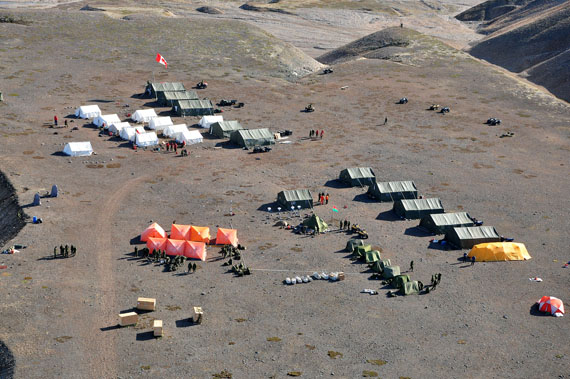 An aerial view taken Aug. 27 of the camp set up at York Sound for Operation Nanook. Most Armed Forces personnel, and others, will wrap up their participation this weekend. (PHOTO BY THOMAS ROHNER)