“We’re going to help create it, but it’s going to have to sustain itself” 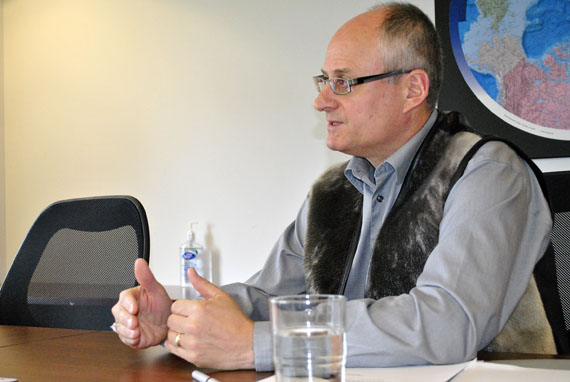 Patrick Borbey, the chair of the Arctic Council’s senior Arctic officials, a group that will hold six or seven meetings in northern Canadian communities over the next two years, talks to reporters in Iqaluit May 29. Those gatherings will include representatives from the council’s six indigenous permanent participants and observer states. The first will be held this October in Whitehorse, Oct. 22 to Oct. 25. (PHOTO BY JIM BELL)

Canada hopes that the circumpolar business conference planned for its Arctic Council chairmanship will have “an ongoing life,” the chair of the council’s meetings of non-elected officials, Patrick Borbey, told reporters May 29 in Iqaluit.

“At the end of the day, it’s not really going to be an Arctic Council initiative in the long term. We’re going to help create it, but it’s going to have to sustain itself through its membership,” Borbey said.

In early March, Aglukkaq named him chair of the Arctic Council’s “senior Arctic officials” or “SAOs.”

That’s the group of non-elected civil servants who do much of the Arctic Council’s heavy lifting between its big ministerial gatherings, which are held only every two years.

The Arctic Council’s SAOs, on the other hand, usually meet three times a year, at gatherings that include representatives of the council’s six indigenous participants and observer states.

At the same time, CanNor, which Borbey will continue to run, will lead the work that’s required to organize the circumpolar business forum.

To that end, a senior CanNor official, Mitch Bloom, the agency’s vice president of policy and planning, will sit on an eight-nation task force that will figure out the business forum’s terms of reference, likely by the end of June.

In January 2014, they hope to launch the idea at the Northern Lights trade show in Ottawa.

On that proposal, CanNor is already working with the Baffin Chamber of Commerce, which is a Northern Lights organizer, Borbey said.

And until that happens, there won’t be many details about how the gathering will work, or where it will be held.

“It’s still under definition. We have to work with our seven Arctic Council partners plus the six permanent participants in the task force on how to go about doing this,” he said.

But one of Canada’s aspiration’s is clear: to encourage the circumpolar business forum to develop a life outside the Arctic Council.

“We don’t see it as an annual event. but something that will have an ongoing life, and from time to time, there will be an event where they will come together,” Borbey said.

As for the regular meetings of the Arctic Council’s SAOs that Borbey will chair, almost all of those will be held in northern locations, such as Yellowknife, Inuvik and Iqaluit.

“We want to expose as many people from the other Arctic states as possible to the realities of Canada’s North,” Borbey said.

To that end, the first Arctic Council SAO gathering under Canada’s chairmanship will be held in Whitehorse Oct. 22 to Oct. 25, he said.

“Our objective is to have all these meetings in the North,” Borbey said.

And the council’s many working groups and task forces, each of which works on a specific issue, may end up meeting in smaller northern communities, Borbey said.

Canada’s chairmanship of the Arctic Council started May 15 at the organization’s ministerial meeting in Kiruna, Sweden.