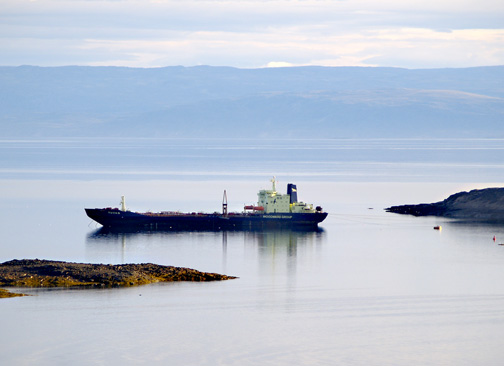 The tanker ship Tuvaq takes on a load of fuel in Iqaluit in September 2010. The Tuvaq left for Nunavut’s Kitikmeot region where it ran aground 30 kilometres from Gjoa Haven. (PHOTO BY CHRIS WINDEYER

Canada needs to be better prepared for a catastrophic spill of oil in the Arctic, say members of Transport Canada’s tanker expert panel.

And the federal government should make sure the shipping industry, the Canadian Coast Guard and people who live in Canada’s Arctic region are involved in spill preparedness and response, says their review of Canada’s spill and preparedness response for the Arctic.

“Responding to spills in the Arctic is extremely challenging due to the unique features of this region, such as the presence and extent of ice, the lack of infrastructure and the potentially remote location of the spill,” the review panel says in their 112-page report, released April 8.

To limit damage from any Arctic spill, Canada should also move to reduce or ban heavy fuel oils in the Arctic, they said.

The Transport Canada reviewers also suggest collaborating on similar international efforts to eliminate heavy fuel oils from the Arctic with groups like the Arctic Council, set hold its ministerial meeting April 24 in Iqaluit.

In Canada, the Canadian Coast Guard should play a more important role with respect to ship-source spill preparedness and response than it does south of 60, the Transport Canada review says.

And preparedness and response in the Arctic should involve northern communities, through sharing of traditional knowledge, building of awareness and other opportunities for partnership.

“We see the value in interested community members pursuing training, and doing so in a coordinated fashion with potential polluters, responders and regulators who operate in the North,” the review panel said.

The federal government should conduct outreach and awareness-building for spill preparedness and response in the Arctic “by actively engaging communities and other stakeholders,” the panel members suggested.

“This will be of particular importance for Inuit communities, given the importance of protecting natural resources needed for their livelihoods, as well as for cultural and traditional practices,” they said.

To deal with changing conditions in the Arctic, Canada should also regularly review and adjust its Arctic spill preparedness and response requirements and capabilities over the longer term, they said.

Their review makes 25 recommendations on Canada’s spill preparedness in the Arctic.

• development of a Shipboard Arctic Spill Response Plan and a regional response plan in consultation with local communities, industry, other government departments and agencies; and,

In 2010, there were several near-misses with respect to oil spills in Nunavut waters: two tankers ran aground near Gjoa Haven and a cruise shipped ran into a shoal outside Kugluktuk.

A recent review on safety and shipping pointed to an increase in Arctic shipping last year, along with 55 shipping incidents in Arctic waters in 2014.