A cat-like face peers from a rock on display at the Pingualuit provincial park’s visitors centre in Kangiqsujuaq in 2010. The engraving, collected in the 1960s, hails the nearby island of Qajartalik. (PHOTO BY JANE GEORGE) 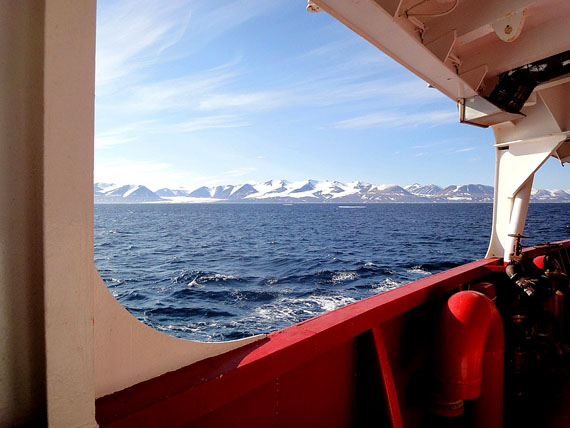 The waters of Lancaster Sound, as seen from the deck of the Coast Guard research vessel Amundsen in 2010. (PHOTO BY JANE GEORGE)

The government of Canada is preparing to push for two spots in Nunavut to be deemed world heritage sites.

On Thursday, Dec. 20, the Canadian government added Sirmilik National Park and the nearby proposed Tallurutiup Imanga National Marine Conservation Area at Lancaster Sound to its tentative list of areas it wants designated as world heritage sites by the United Nations Educational, Scientific and Cultural Organization.

Parks Canada describes the two adjacent sites as “one of the most biologically productive and diverse Arctic marine areas in the world” and “an exceptional representation of human integration with high Arctic coastal ecosystems and a vast land-sea- and ice-scape that tells the story of human occupation over millennia. It is also a living cultural landscape where Inuit are integral to the ecosystem.”

Canada has also shortlisted Qajartalik, an island in the Hudson Strait near the Nunavik community of Kangirsujuaq, known for mysterious carvings of faces etched into its rocks that date back to the Dorset era more than 1,000 years ago.

Parks Canada says “Qajartalik is not only the most northerly rock-art site on the continent; it is also one of a kind.”

This is just the first step in a long process that’s expected to take at least two years. None of these sites are assured of becoming a world heritage site yet.

Next, the government would need to prepare a detailed dossier that spells out why these sites meet the criteria to become a world heritage site. That includes showing how the sites are being managed and protected, and that these sites have “outstanding universal value.”

Six sites remain on Canada’s tentative list from the last update in 2004, including Quttinirpaaq National Park on the northeastern corner of Ellesmere Island, as well as both Dawson City and Herschel Island in the Yukon.