“Canadian leadership in the Arctic is needed” 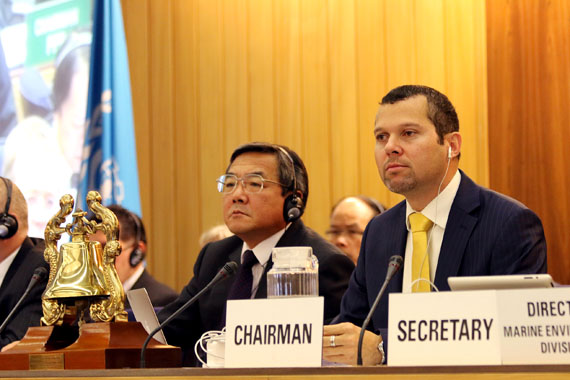 Koji Sekimizu (left), the secretary-general of the International Maritime Organization and Arsenio Dominguez of Panama, chair of the gathering, at a meeting of the IMO’s Marine Environment Protection Committee in London held between Oct. 13 and Oct. 17. At that meeting, delegates approved a draft verson of the Polar Code, which is expected to be finished in May 2015 and implemented in 2017. (IMO PHOTO)

For northern communities and economies, the expected growth of Arctic shipping has the potential to bring new jobs and industries, lower cost of living, and new infrastructure and investment.

But with these exciting opportunities come certain risks that must be managed.

This week, a draft international agreement — the Polar Code — was reached for new shipping regulations in the Arctic at a meeting of the International Maritime Organization’s environment committee.

For the first time, binding rules for ship operations will be in place. This is welcome news as ice melts and development pressures ratchet up in the Arctic.

It is encouraging to see new voyage planning regulations that account for marine mammals — it’s now mandatory during the planning stage and day-to-day operation of ships to consider whale migration corridors and feeding and breeding areas.

These new provisions will reduce ship conflicts with whales and give assurance to local hunting and subsistence users that depend on this important resource.

However, many of the environmental provisions need to be strengthened before the Polar Code is finalized, to protect Canadian communities, economies, and ecosystems.

Among the issues still to be addressed are the use and carriage of heavy grade fuel oil, which is completely prohibited in the Antarctic due to its toxic air emissions and the dangerous consequences of a spill for marine life — an even greater concern, perhaps, in the Arctic, which is home to thousands of people.

The Polar Code must also set guidelines to limit underwater noise from ships, which can significantly alter and affect both the habitat and ability of marine mammals to forage and breed.

Regulations are also still needed to keep ships and crews not equipped for heavy ice out of the Arctic, and to manage ship speeds and routing for safety and to avoid conflicts with wildlife.

The IMO now needs to build on the positive momentum of this week’s agreement and set out a clear scope, work plan and timetable for a second phase of negotiations that addresses these important topics.

Of course, good regulations alone are not enough. The Canadian Environment Commissioner for Sustainable Development pointed out in her recent report a troubling lack of coordination between regulatory agencies and of basic infrastructure, which is key for community development as well as safeguarding the environment. Compounding the current deficiencies is the absence of planning for expected future development.

However, credit should be given where credit is due. Canada’s regulations of a zero discharge regime for pollutants coupled with a zone date system for entering into ice covered waters, are more stringent than these new internationally binding regulations.

Canadian leadership in the Arctic is needed to secure strong and comprehensive international rules.

The waters of the Arctic Ocean know no boundaries, and what happens outside of Canadian waters — including oil spills and major releases of pollutants – can easily move into our territory.

Paul Crowley, a lawyer who lives in Iqaluit, is the new director of the World Wildlife Fund’s Canadian Arctic Program.