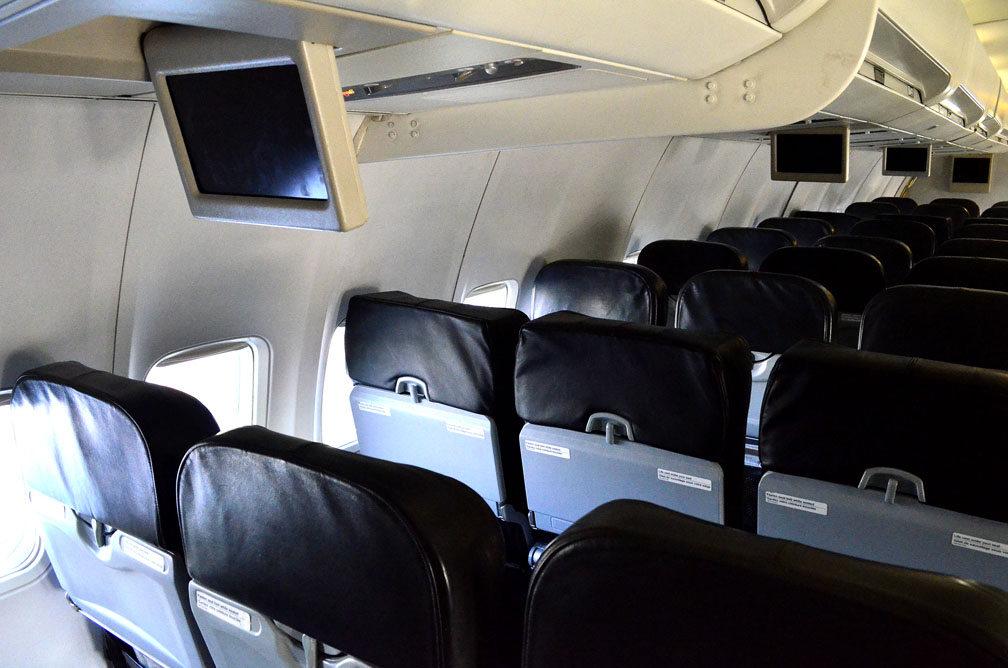 Here’s a look inside the cabin of a Canadian North 737-300, outfitted with leather seats and an entertainment system, that began operating on the Iqaluit-Ottawa route in January 2017. In January 2019, the company will start offering television shows and movies that will stream to mobile devices and laptops. (FILE PHOTO)

In January 2019, Canadian North Inc. will attempt to entice more charter and scheduled service customers with the temporary launch of a new in-flight wireless entertainment system on four of its Boeing 737-300 aircraft.

The new system, supplied by a company called Global Eagle Entertainment Inc., will let passengers stream movies and television shows to their mobile devices and laptops, the company said on Tuesday, Sept. 25.

Passengers can also use the wireless system to download copies of Up Here, Canadian North’s in-flight magazine, and Tusaayaksat, a magazine that showcases the culture of the Inuvialuit.

“Throughout Canadian North’s history, we have continually grown and innovated for the benefit of our scheduled service and charter customers, always with warm hospitality and an unyielding commitment to safety,” Steve Hankirk, the president of Canadian North, said in a news release.

Canadian North will offer the service on its Iqaluit-Ottawa and Edmonton-Yellowknife-Norman Wells-Inuvik scheduled flights, as well as on selected charters.

They’ll start with these flights:

• Flights 436 and 437: between Iqaluit and Ottawa, in both directions

In time, Canadian North wants to offer the service on all 16 of its Boeing 737 and Bombardier Dash-8 aircraft, the company said.

Meanwhile, there’s still no word on talks between the Inuvialuit Corporate Group and Makivik Corp., the owner of First Air, on a proposed merger of Canadian North and First Air that they announced this past July.

“Makivik took this initiative to begin the discussion under the new direction of Charlie Watt Sr.,” Makivik said last July.

The new pan-Arctic airline would still operate under the name “Canadian North,” but feature First Air’s current livery, including its inuksuk logo, which was unveiled in October 2017.

The two companies said in July they expect to complete the merger by the end of this year.