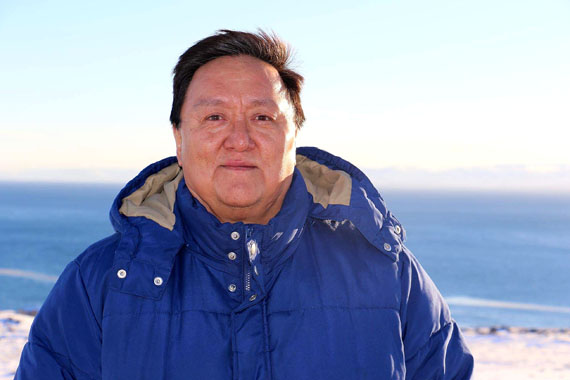 NTI presidential candidate Joe Adla Kunuk says that where possible, he wants to transfer responsibilities to the RIAs from NTI as way of saving money. (PHOTO COURTESY OF JOE KUNUK)

With Nunavut Tunngavik Inc.’s presidential election set for Dec. 12, Nunatsiaq News plans to profile each of the four candidates. We asked the candidates the same four questions. Their responses have been edited for length and clarity. We will run the profiles of the candidates according to alphabetical order.

Advance polling for the election takes place Dec. 5 and voting by proxy is also possible. More information on the election is available here.

Joe Kunuk currently works as president of Nunavut Arctic College, a post he has held since 2015. He has also held senior posts with the Government of Nunavut in several departments, and has served as CEO of NTI and mayor of Iqaluit.

Q1: What are the issues most important to beneficiaries that you would raise as NTI president?

As president, one of my first priorities would be to look at the “Closer to Inuit” initiatives. That would see NTI review its budget and see where we can reduce it, and from that reduction pass on those benefits to beneficiaries through their RIAs.

The other [priority] is our relationship with the two governments, the GN and the Government of Canada. We need to work closely with both governments.

Another important thing is the reconciliation from residential schools. Even with things like the Qikiqtani Truth Commission report. Those things will let us move forward and heal.

Transparency is quite important too. With the amount of money that NTI and RIAs are spending, how are those millions of dollars being spent to benefit us on the community level? … At the end of the day, it’s our money, Inuit money, and not many people know how to access that information and know what those expenditures are.

One big thing I’ve heard about from people is getting rid of first class travel for NTI executives. If the executives want to travel business class, he or she should pay for the difference, not NTI.

Other people have expressed to me, if we can extend or go beyond the 1938 cut-off date for Inuit to receive the elder’s pension through NTI.

Q2: Given the historically low voter turnout and vote splitting in NTI elections, executive members are often elected by a minority of votes cast. How do you make NTI elections more meaningful? Is NTI losing its political legitimacy?

The legitimacy is there, because of multi-million dollar agreements.

I talked to high school students recently and shared with them that they should go to vote. I gave them a short history of how NTI came about, where NTI should be going and that 16-year-olds have as much influence on our future, and they’re the ones who will live with the decision that are made by NTI.

We need to get voters out and voice their opinion by marking an “X” by our names so that we’ll have a strong mandate in the future. Previous presidents have won with less than 1,500 votes Nunavut-wide… So we need, all four of us candidates, to tell our fellow beneficiaries to go out and vote, that their vote is important.

This land claims agreement we have is there for life and we need to ensure that $1.4-billion stays there for our grandchildren, and so on, so that we continue to play a big role in shaping our future.

Q3: The president and other NTI and RIA executives control the management of the Makigiaqta Inuit Training Corp., formed with $175 million in federal settlement money. As this is not a public body, how would you ensure that this vital service remains transparent and accountable?

We need to know what priorities are being set by those involved in the MITC and that we have input on the community level, just like the [Nunavut Implementation Training Committee] used to have. We need to evaluate MITC on an annual basis on those community priorities.

The Thomas Berger report in 2005-6 indicated that language was a priority in order to achieve Article 23. So I would go to the Prime Minister and the premier and say, “In 2006 we agreed to appoint Thomas Berger, he did his report, and those recommendations are still there.” We need to use that report as our guide for MITC. That way people will know how we’re spending money.

Q4: NTI needs to work with other stakeholders, such as the GN and RIAs, to carry out their mandates. What would your general leadership style be with your other stakeholders? What specific tools would you use to ensure constructive working relationships?

We need new working relationships with the GN, the federal government and RIAs. Part of my campaign is devolving as much authority as we can from NTI to the RIAs… I started that off when I was with NTI as CEO in 2005, when we were looking at how to save money instead of taking more from the Nunavut Trust.

The NTI executive should meet with the GN cabinet on a regular basis and provide regular briefings to MLAs on what we’re doing.

I’d work with the RIAs and their memberships to draw out the many challenges communities face. My background in trying to resolve issues and not just criticize, is a factor that would be part of my presidency.