“By working well together, and with solid communication, we can only move forward” 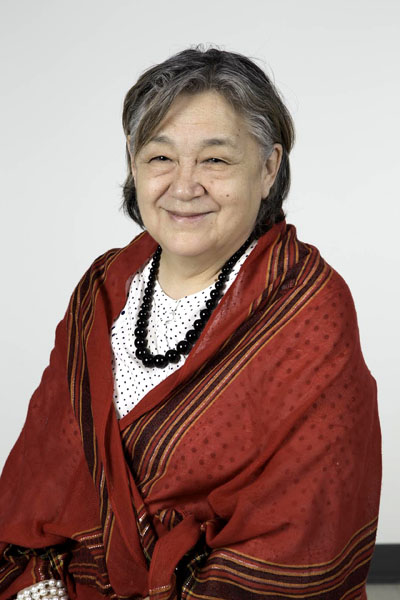 Levinia Brown served in the Nunavut legislature as MLA for Rankin Inlet South-Whale Cove between 2004 and 2008 and sat in the Nunavut cabinet as deputy premier, minister of health and social services, minister responsible for the status of women and minister of community and government and services. She is also a former mayor and deputy mayor of Rankin Inlet.

Beneficiaries are speaking out that they want 24-hour nursing homecare. That seems to be the priority that I’m hearing. Elders are being sent away far from home and it’s not fair at all. Beneficiaries want us all to get together and see what we can do about the urgency of 24/7 care [for elders].

I would also advocate for food security. I would meet and talk with the Government of Nunavut and come up with solutions. Food prices are out of control.

[Inuit] want transparency and openness on NTI’s [finances]. I was hearing, even when I lived in Winnipeg, that people were asking why don’t I run as president, or even vice-president, because they thought I would speak on their behalf when it comes to the money that NTI is using.

I truly believe beneficiaries have the right to know [more about NTI spending] because the Nunavut Land Claim Agreement was an agreement for all beneficiaries so I believe its important to let them all know where the money is going. [Beneficiaries are asking me]: the top people [at NTI] are they benefiting? Is it only them?

I believe that’s part of it. The low voter turnout is definitely a concern. Beneficiaries mention there have been too many elections: that people are tired of elections. That’s one part.

If we were to visit more communities as elected members, have radio shows and have meetings with the communities, I think that would boost voter turnout, which is so important in every community in Nunavut.

I see a lot of documents going out. My question would be, are they reaching the beneficiaries? Are they reading these documents, even though they are very important? I’m wondering if they know the policy.

It’s important to keep training beneficiaries. Another thing I hear as I campaign is why can’t the beneficiaries be trained to management jobs, supervisor roles, directorship and those [kinds of jobs] instead of being janitors and chambermaids, kitchen helpers, waiters.

Why aren’t they being trained for higher-up positions? In offices, why are [beneficiaries with high school diplomas] not shadowing [other employees]? [In the federal government] they hire so many [interns], why don’t they do that in the GN too? Maybe they do, but beneficiaries need more publications, not just written but also on social media.

There are many positive things happening. There’s progress, but we need more numbers in those areas [of employment].

I welcome that opportunity. By working well together, and with solid communication, we can only move forward. The techniques that I would use as President is invite [the Government of Nunavut] to NTI meetings. I’m sure that’s happening but its got to happen more regularly so that we are heard and taken seriously.

Its so important that all designated Inuit organizations have good working relationships with the GN and the federal government because they too have signed the NLCA, so the communications should never break down and we can address all these issues together.

A policy is taken seriously. Sometimes verbal agreements disappear and we don’t hear it again. Once it’s in writing, it’s a document.