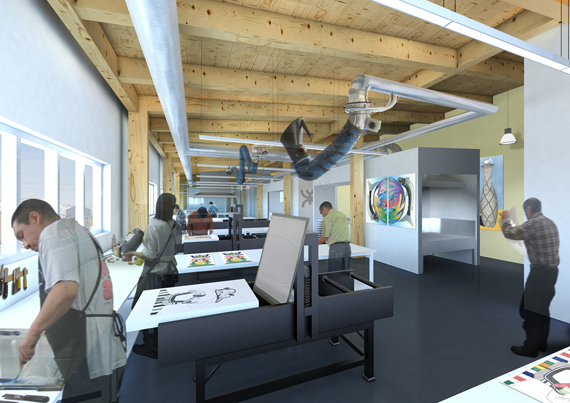 This computer-generated graphic shows what the interior of Cape Dorset’s new Kenojuak cultural centre and print shop would look like after it’s constructed. (IMAGE COURTESY OF PANAQ DESIGN)

The Canadian Northern Economic Development Agency is spending $344,016 on a new $7.5 million print studio and cultural centre that the West Baffin Co-op hopes to open by 2016, the agency announced June 26.

At the same time, Nunavut Tunngavik Inc. will throw another $43,000 into the project, an amount the Hamlet of Cape Dorset is matching with its own $43,000 contribution

To be called the Kenojuak Cultural Centre and Print Shop, the new 10,000-square-foot building would replace the Cape Dorset co-op’s old studio buildings, which date to the 1970s.

One part of the new facility would be used as a studio for eight to 10 artists.

Another part would serve as a heritage centre to house the co-op’s permanent collection, which is now scattered throughout various places in Nunavut and southern Canada.

Early last month, the studio’s retired manager, Jimmy Manning, who also serves as president of the Inuit Art Foundation, visited Toronto to solicit donations as a part of a southern fundraising campaign led by the IAF.

Two chartered banks, the Canadian Imperial Bank of Commerce and TD Canada Trust, each agreed to donate $200,000 towards the project.

The co-op hopes to be able to start construction in 2015.

At the same time, CanNor has already spent $143,049 on renovations to Cape Dorset’s Alda sewing group building, which re-opened this past spring.

The Government of Nunavut put $113,049 into the sewing group project and the Hamlet of Cape Dorset kicked in $29,352.

The money paid for renovations aimed at bringing the building back up to code, including new windows, siding, a new roof, and an electrical system.

The Alda building is used for workshops where elders teach traditional sewing techniques and share stories.

In the summer, local artists can use the space to display and sell artwork to tourists.