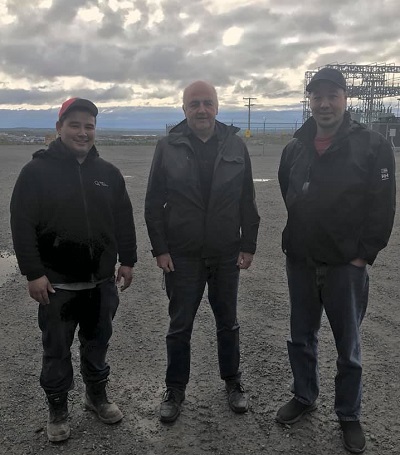 A former Nunavik police officer says he has the knowledge and connections in Quebec’s North to make him the best representative for Quebec’s Ungava riding.

“I don’t want to do politics just to do politics; I want to make changes,” said Lamothe on the phone from Wemindji on the James Bay coast, where he’s visiting as part of a tour of the riding this week.

“There are three different dynamics in the riding,” Lamothe said, referring to the Inuit, Cree and non-Indigenous communities that make up the riding. “Those issues that Nunavik has—that the region has—I strongly believe I can be a voice for them.”

Now retired, Lamothe worked for the SQ in Kuujjuaraapik in the early 1990s—before the Kativik Regional Police Force was established—and again later in Kuujjuaq in the mid-2000s.

He also spent a number of years working for the SQ in Cree communities further south, in the Eeyou Istchee region.

Lamothe, now based in Chibougamau, said his time in those communities revealed how much southern-based governments make decisions for northern communities.

“It’s about time that the solutions for the issues has to come by the Inuit, for the Inuit, with government support,” he said.

Lamothe first connected with CAQ leader François Legault when he worked as Legault’s chauffeur, after Legault first launched the party in 2011.

If elected as member of the national assembly for Ungava, Lamothe said he would help accelerate the process of creating made-in-Nunavik youth protection services, a process which has just begun under the Nunavik Regional Board of Health and Social Services.

Lamothe said he also plans to make a strong push for more post-secondary training and programs in the region.

He points to one fairly successful example—the Kativik Ilisarniliriniq-McGill University Inuit teacher training program. The program allows teachers to earn their degree part-time while they work, but it takes an average of nine years for students to graduate.

Offering education in teachers’ home communities would allow them to complete the program faster, without having to leave their families to travel to Montreal.

The CAQ has come under fire for its plans to lower the number of immigrants admitted into the province by 20 per cent, and making it mandatory for those who do come to Quebec to learn French.

The party is also campaigning Quebec-wide with a pledge to invest hundreds of millions of dollars into health, education and better seniors care and to extend kindergarten to four-year-olds across the province (currently, children start school at age five).

And in a provincial campaign in which Indigenous-focused issues and debate have been largely absent, the CAQ is also pledging to implement the United Nations Declaration on the Rights of Indigenous Peoples, which is meant to enshrine the collective rights of Indigenous groups.

“It’s a question of respect,” Lamothe said. “We’re very open to that.”

Lamothe is also clear that Ungava is a strategic riding for any political party. “There is no other region in Quebec with so many resources,” he said.

Quebecers go to the polls on Oct. 1. You can register to vote here.