Carleton University screens doc about Nunavut mining and the land

“We’re the smiling Eskimo. We sort of look dumb. But times are changing and we’re learning how the system works” 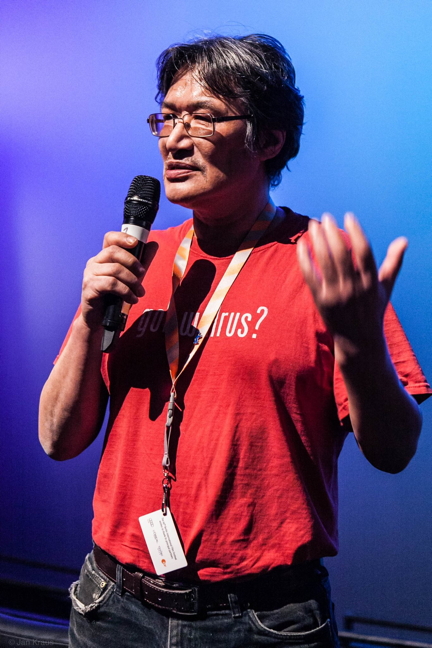 Inuit director Zach Kunuk in February 2016 at Berlinale, Berlin, Germany’s annual film festival. The award-winning director’s 2014 documentary My Father’s Land, which focuses on the 2012 Nunavut Impact Review Board hearings on the Mary River mine, will screen in Ottawa March 2 at 6:30 at the Mayfair Theatre as part of a Carleton University Faculty of Public Affairs conference. (FILE PHOTO)

Award-winning Inuit filmmaker Zacharias Kunuk is excited about this week’s screening of his 2014 documentary My Father’s Land in Ottawa and he’s looking forward to going to the capital to answer questions from the audience when the film is over.

But he almost didn’t get there.

Kunuk recently lost his wallet on a January trip to Canada’s Top Ten Film Festival in Toronto, and with it, all his photo identification.

To make matters worse, Kunuk’s passport just expired so he now has no photo ID. He was hoping to get a temporary ID from the Igloolik hamlet office so he could fly.

Reached at his home in Igloolik Feb. 23, Kunuk and friends were in the middle of assembling and checking gear for a weekend walrus hunting trip. So worst case scenario, if he couldn’t fly to Ottawa, at least he would have been doing something else he loves.

My Father’s Land is a film nearly three hours long that Kunuk made to document the social, environmental and economic changes occurring in North Baffin as a result of Baffinland Iron Mines’ Mary River mine, roughly halfway between Igloolik, Kunuk’s hometown, and Pond Inlet.

My Father’s Land happens to be about Kunuk’s father Enuki, but Kunuk said it could be about anyone’s father because “it’s all our fathers’ land.”

The film, which airs March 2 at Ottawa’s Mayfair Theatre, is part of Carleton University’s “Visions for Canada 2042,” a conference hosted by the university’s faculty of public affairs.

The conference hopes to explore “the ways innovative collaboration among researchers and the community may be the most effective response to Canada’s future challenges,” says a conference news release.

Most Inuit didn’t understand the scope and implications of the Mary River mine when its Phase II Milne Inlet port project was first proposed so when the Nunavut Impact Review Board scheduled public hearings in 2012, Kunuk registered as an official intervenor.

Canadian human rights lawyer Lloyd Lipsett joined Kunuk at the hearings to offer support and advice and to conduct a human rights assessment of the project as a consultant for the Digital Indigenous Democracy project.

“Everything was new to us. All these assessments were new,” Kunuk said.

“If you were an Inuk corporation with Qallunaat lawyers you could intervene. But if you were a northern Inuk, how do you intervene? So as an ordinary Inuk, I intervened.”

The process was absurd and intimidating at times, with unilingual Inuit facing off against Baffinland’s team of lawyers and experts, he said. But at least Inuit got a chance to be heard.

“Imagine if we were in Congo. People get killed for talking back at these companies. Lucky for us, we’re in Canada. Lucky we had our land claims. We’re very lucky to live in a democracy,” he said.

The film opens with a heart-wrenching scene where Enuki Kunuk and several relatives encircle a stone cairn that’s been toppled on a rocky field.

It’s the gravesite of Enuki’s father, Zach’s grandfather, Sitluk. Enuki knew roughly where the site was and had an outpost camp nearby but the grave’s exact location had eluded him for 50 years.

In 2014, the Kunuks held a family reunion in Igloolik and relatives decided they would spend a day searching for it. Kunuk’s brother, Paul Irngaut, eventually found it.

The scene shows Enuki wiping tears away as he tells stories of what his father had taught him and of the Inuit tradition of throwing spare meat near the graves of your ancestors as an offering to the land and to feed the spirits of the deceased.

Afterwards, the men gently place Sitluk’s skull and bones back into the ground and cover them with stones, some of them wiping their own tears away.

The film then cuts to the NIRB’s Mary River hearings in Igloolik and the story shifts from past to future land use.

Now that the mine is up and running, some Inuit are getting jobs but those jobs are mostly manual labour, Kunuk says—laundry and kitchen jobs. For Inuit to truly benefit, they need to be trained for better paying jobs than that.

Kunuk said the mine at Mary River has been around for more than 50 years and its high grade iron ore will keep people digging so Inuit will have to get used to industrial development there. But Inuit must work hard to ensure they benefit and that the costs—to people and the environment—are not too high.

“Look at Kivalliq. They are working with gold mines and they have tailings. We don’t have tailings at Mary River so we should just be happy. They seem to be welcoming those miners and working with them. Looks like they have it worked out. We should too,” Kunuk said.

“We’ve always been here. We’re the smiling Eskimo. We sort of look dumb. But times are changing and we’re learning how the system works. We just want to be fair.”