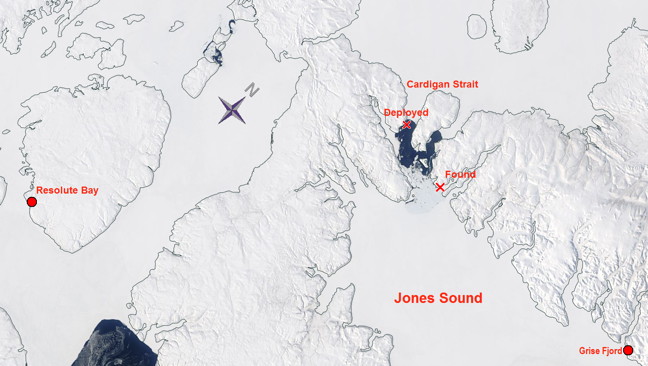 This satellite image shows the original location of a tidal sonar moored in Cardigan Strait in 2005. The sonar, which became lost in 2007, was found 10 years later, between 10 and 15 kilometres from where it was first launched. (PHOTO COURTESY OF NASA WORLDVIEW) 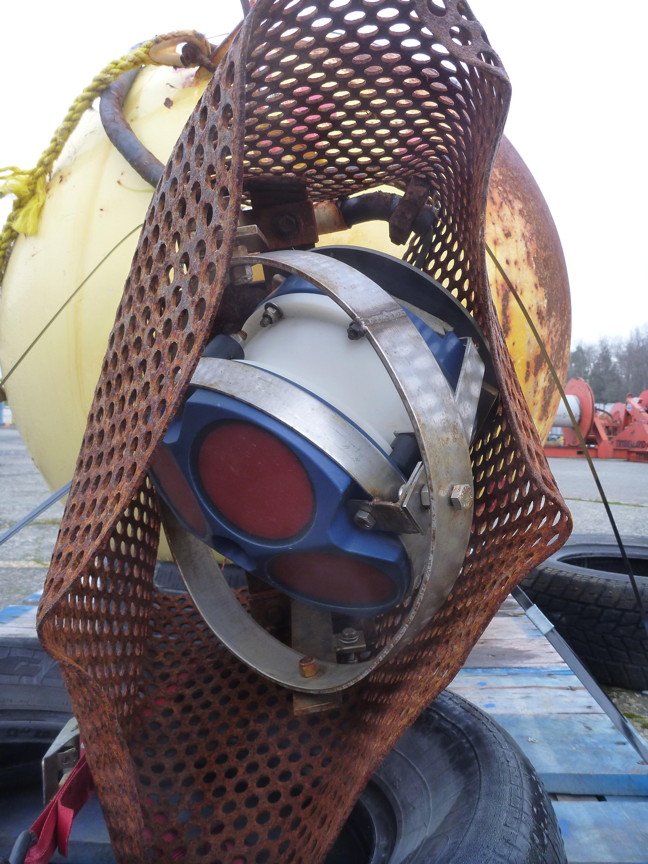 A view of an underwater sonar attached to a steel float. The sonar was found to have useable tidal data on it, despite it being lost for over a decade. (PHOTO COURTESY OF HUMFREY MELLING) 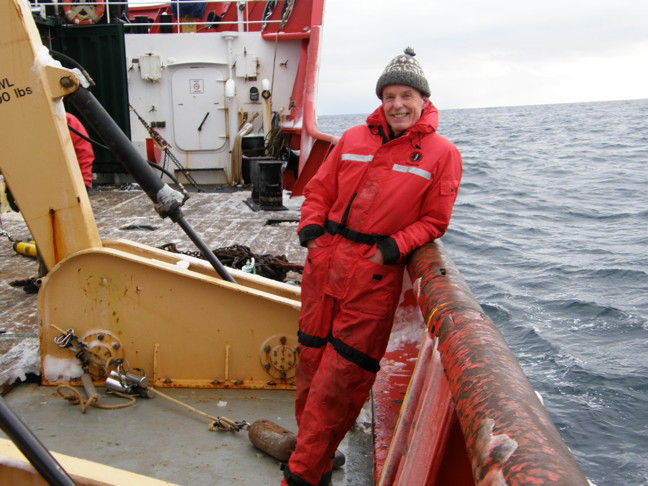 Humfrey Melling is a lead DFO researcher at the Institute of Ocean Sciences in B.C. (PHOTO COURTESY OF HUMFREY MELLING) 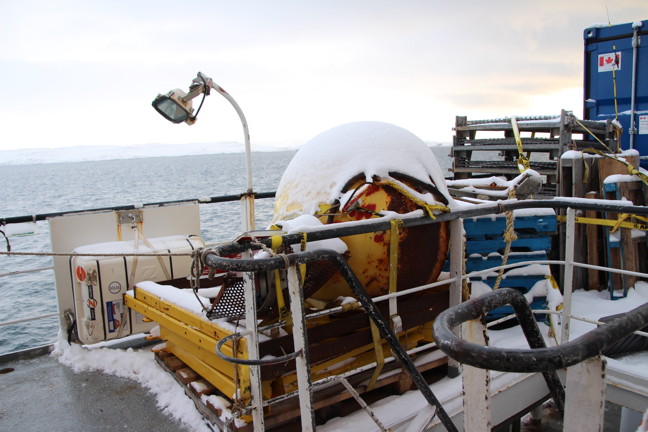 This snow-covered contraption is the top half of an underwater float used to house an autonomous oceanographic sonar that was recovered this summer by the Canadian Coast Guard in Cardigan Strait near Devon Island. The instrument had been missing for 10 years. (PHOTO BY BETH BROWN)

If you sail westward through Jones Sound, between Devon Island and southern Ellesmere Island, you’ll come to a choice of two narrow channels that flow out into Norwegian Bay.

For ships or small craft, Cardigan Strait and Hell Gate offer western passage to or from the High Arctic community of Grise Fiord.

For animals, the channels provide natural havens, created by strong tidal currents that warm the water, thin the ice and stir up seabed nutrients to feed the ocean ecosystem.

But those strong currents also lead to ice buildup that is dangerous for navigation.

“In Hell Gate they run above six knots, in spring tides. In Cardigan Strait they are over four knots,” said Humfrey Melling, a seasoned northern researcher for the Department of Fisheries and Oceans. “On the change of tide the ice can all pile up and create congestion that is not a safe situation to be in.”

That’s why, starting in 1998, Melling and other researchers from the B.C.-based Institute of Ocean Sciences began using autonomous underwater oceanographic sonars to track the tidal currents, temperature and salinity in Cardigan Strait and Hell Gate, to better understand their long-term impact on wildlife, climate and ice patterns.

But in 2007, two years worth of data for that project, the Canadian Arctic Through-flow Study, was lost when two sonars launched from the CCGS Des Groseilliers in 2005 went missing.

Until now that is.

This past fall, 12 years after being moored beneath the waves on the western side of Cardigan Strait, one of those sonars was found—and only 10 or 15 kilometres from where it was first set.

Nunatsiaq News learned about the prodigal sonar while aboard the CCGS Henry Larsen in November, when the ship, which was carrying the sonar home, was anchored in Frobisher Bay.

The Henry Larsen—an icebreaker and research vessel that took part in the Cardigan Strait and Hell Gate project—was then asked to pick up the found float.

The ship’s commanding officer, Neil MacDonald, said the buoy was recovered in Walrus Fiord on Aug. 30, 2017.

Researchers at the Institute of Ocean Sciences received the tidal float over the holidays, and first checked its instruments on Jan. 10.

“There’s not so many beachcombers up in the Arctic,” said Melling, a few days later.

The area is a long way from Grise Fiord, and most hunters or winter travellers would be sledding over the ice. After checking the sonar’s surviving data card, scientists assume that the top half of the tidal mooring sat untouched for over a decade, scientists found.

While the instrument’s battery was gone, the data card, holding measurements of tidal currents and biological life in the water column, showed that the device had been in working order up until the spring of 2007.

At that point, in April, the sonar’s sensor went from recording a temperature of around -1.5 C to -15 C.

That meant the sonar was now measuring air temperature, Melling said, which proves that the electronic clasp anchoring the sonar float to its mooring had let go a few months too soon.

“It was still operating for another ten days,” Melling said. The data showed that the free-floating sonar tipped over sideways a few days after the release broke. This is likely what led to the battery damage and the end of recorded data, he said.

But how could the float measure air temperature in April, at a time when the Arctic is still covered in heavy ice?

That’s where the tidal currents come in.

The fast currents in Cardigan Strait warm the water, allowing ice-free areas, or polynyas, to form in the channel.

When released from its mooring, the tidal sonar would have had an upward pull of around 700 pounds (318 kilograms), so pushing through any thin ice that was on the surface would have been a non-issue, according to Melling.

“It would come up at three or four metres per second,” he said. “Where it came ashore was where this polynya would have trapped this float during the winter.”

And since the sonar was found at the strait’s southern fiord, that means it probably washed up on shore fairly quickly.

“If it hadn’t gone ashore before early August when Jones Sound broke up, it probably would have drifted into Baffin Bay,” Melling said. Instead, “it just sat on the beach.”

While the tidal study in Cardigan Strait and Hell Gate wrapped up in 2012, scientists at the Institute of Ocean Sciences are still placing similar sonars in other marine areas throughout Nunavut.

“The idea is to do exploratory first measurements in remote areas of the Canadian Arctic,” he said.

Autonomous tidal sonars for the ongoing Arctic Canada Watch Project are currently moored in small bodies of water near Cambridge Bay and Kugluktuk, and in the past have gathered data in areas like Byam Martin Channel off eastern Melville Island, and in Penny Strait by northern Bathurst Island, past Resolute Bay.

As for the two channels between Devon and Ellesmere Islands, Melling said that when it comes to nurturing northern wildlife, their reach is much greater than the polynyas’.

“Areas like Cardigan Strait stir the bucket really well,” he said, explaining how the currents boost the food chain by moving nutrients out into larger marine areas.

“The channels, because of the strong tides, they’re an intrinsic part of the supply area for that park in northern Baffin Bay and eastern Lancaster Sound,” he said, speaking of Tallurutiup Imanga, a marine area twice the size of Nova Scotia, which, as was announced last summer, is now officially protected.

So while the tides in the two channels can cause problems for vessels, the same set of waterways that fork around the tiny island of North Kent are the perfect place for studying how water and wildlife work together in harsh Arctic environments.

“You have these winter biological oases that are driven by the deep and strong currents,” Melling said.

Chances are he never thought that such an oasis would offer refuge, at least for a time, to an instrument meant only to observe it—one wayward oceanographic sonar.