Cause of Iqaluit baby’s 2015 death is “undetermined,” pathologist says

“I cannot identify a reason” 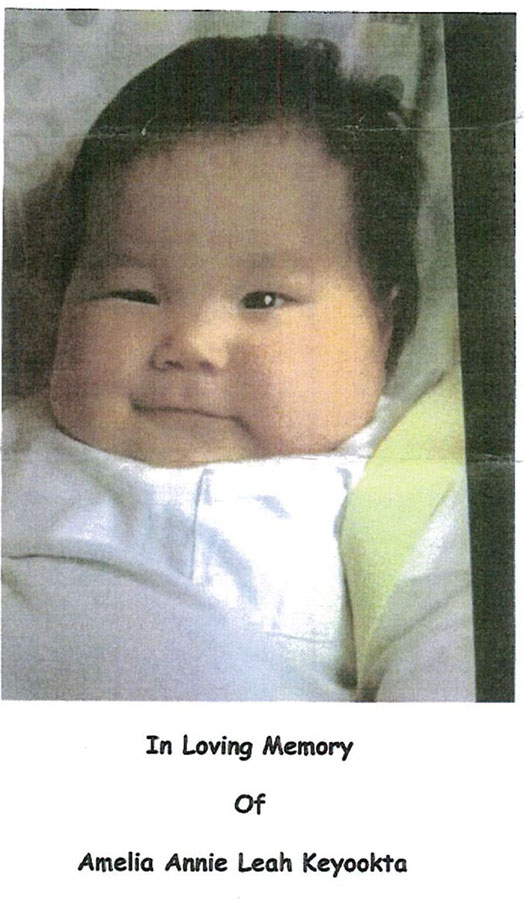 Baby Amelia Annie Leah Keyookta, aged about four and a half months, died on July 29, 2015 while in the care of the Department of Family Services. Dr. Christopher Milroy, a medical examiner, testified at a coroner’s inquest yesterday that, following an autopsy, he cannot determine the cause of death. (EVIDENCE PHOTO)

The cause of baby Amelia Keyookta’s death is unknown, Dr. Christopher Milroy, a forensic pathologist, told a coroner’s inquest yesterday in Iqaluit.

“I gave the cause of death as undetermined,” Milroy said.

Milroy performed an autopsy on Amelia’s body after she died suddenly on July 29, 2015. An autopsy is a medical examination of a body after death.

The four-month-old baby was found not breathing during nap time at the home of a caregiver employed by Nunavut’s Department of Child and Family Services.

She was pronounced dead at the Qikiqtani General Hospital, at about 3:30 p.m. that day.

An inquest into the child’s death is taking place this week in a room at the Nunavut Court of Justice in Iqaluit.

The day before her death, the infant was apprehended from her family when social workers said excess marijuana smoke made it unsafe for Amelia and two other children to stay at home.

The social workers had made an unannounced visit to a home that Amelia’s parents said they did not live in permanently.

Besides marks from resuscitation attempts, there were no outer injuries on Amelia, and CPR efforts did not injure the child, said Milroy, who spoke via video conference April 25 during the third day of the five-day inquest.

A “naked eye” check of her internal organs did not show signs of disease, he said.

She did carry one common viral strain, Milroy found, after looking at her body tissue under a microscope.

“There was evidence of a mild infection in this child, but no condition that would account for death,” he said.

“What I’m left with is a child who died suddenly in whom I cannot identify a reason for their death.”

He did not set the cause of death as sudden infant death syndrome, or SIDS, because recent studies show that SIDS can cover a whole group of disorders in children.

He said the term is used less often in medicine now.

“If you call it SIDS, you’re saying … we don’t exactly know what it is.”

There are risks factors for sudden death at infancy—including smoke in the home, toys and pillows left in a crib, or laying a baby to sleep on their tummy instead of their back—but these risks are not the same as a cause of death, he said.

“One would have to say that smoking marijuana around a child must be considered a risk factor to sudden death,” he said.

But, he added, “it’s not the cause of the child’s death.”

Amelia’s caregiver testified on Tuesday, April 24 that the child was sleeping on her stomach when she was found not breathing.

An accumulation of risk factors paired with medical vulnerabilities, such as a respiratory illness, could lead to sudden death in some babies, but not all, Milroy said.

He also found no signs of choking or of food in her lungs.

When they were called on July 29, first responders immediately checked to see if Amelia was choking, paramedic Sharon Nowlan said.

“The airway was not blocked and the baby was not choking,” she said.

The emergency team spent about nine minutes at the care home where Amelia was found before taking her to the hospital in an ambulance.

In the emergency ward, about 15 staff were crowded around the child, Const. Eric Lefebvre of the RCMP said.

“It was the busiest I’ve seen the ER in three years of being here,” he said.

Lefebvre stayed with the body until the infant was secured in the morgue and said RCMP determined later that their investigation into Amelia’s death wasn’t criminal.

“Nothing was out of place or seemed suspicious at the time,” he said.

It was Lefebvre who spoke with Amelia’s parents when the child was apprehended the day before.

“You could tell the parents were upset,” he said. “They weren’t freaking out.”

The parents showed signs—such as delayed speech—that they could be intoxicated by marijuana, but the signs were not extreme, he said.

The officer said yes when inquest lawyer Sheldon Toner asked if a speech delay could have occurred because neither of the two parents speak English as their first language.

There needs to be an immediate or ongoing reason for social workers to apprehend a child in Nunavut, Jessica Shabtai said in her testimony.

She was a supervisor with Family Services in Iqaluit at the time.

While the two social workers who made the July 28 visit disagreed about taking the children from the home, Shabtai said it was ultimately her decision to apprehend Amelia.

There were two other children in the home besides Amelia, and one was a premature infant.

This was the second time social workers had visited the children and found thick smoke in the house.

One of the social workers felt sick after being inside the house. Shabtai called this “very uncommon,” and said children could be more seriously affected.

“It wasn’t intended to be a long-term apprehension,” she said.

The next day, the parents expected to get Amelia back when they were instead rushed to the hospital.

Resources are very limited for front-line workers employed by the Department of Child and Family Services, Shabtai said.

For staff, investigations like Amelia’s are in addition to 30 or 35 cases each person may be responsible for at any given time.

Staff ran “from crisis to crisis” and there wasn’t time for community outreach or preventative care, she said.

Many of her staff are not from Nunavut. Cultural sensitivity and language training are encouraged but not mandatory, she said.

Following the inquest, the jury’s verdict will give the cause of baby Amelia’s death and make recommendations for avoiding similar deaths in the future.

An inquest is not a trial and it does not look to find fault, although during the inquest a jury hears witness testimonies.

Northwest Territories Coroner Garth Eggenberger is presiding over the inquest, which will run until April 27.