Chamber of mines responds to allegations made at MMIWG hearings

“The fact remains: women are an order of magnitude safer at our mines than at home” 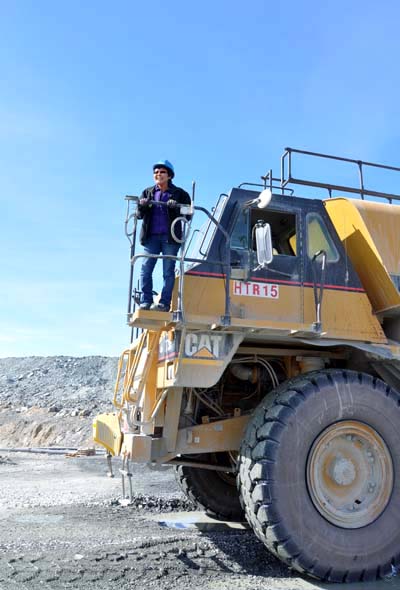 Blandina Kashla, a haul truck driver from Baker Lake, works at Agnico Eagle’s Meadowbank gold mine on June 23, 2014. At that time, most of Meadowbank’s haul truck operators were Inuit, numbering about 75 people. Nearly one-third of them or, or 22, that year were women. (FILE PHOTO)

I wish to respond to the recent Nunatsiaq News story regarding violence against women in mining (“Sexual violence a spinoff of Nunavut’s mining industry: MMIWG hearings,” Sept. 13, 2018).

This article makes substantial reference to expert testimony from an Iqaluit resident—TJ Lightfoot—to the National Inquiry into Missing and Murdered Indigenous Women and Girls held in Iqaluit last week.

With great respect to the actual professional credentials of this expert, Lightfoot is not an expert on mining in Nunavut. In fact, I understand Lightfoot is a youth services worker. As such, these views cannot be relied upon in considering the risk to women that may, or may not, be posed by resource development in our territory.

Violence against women and girls in Nunavut is unacceptable and a grave risk to the health of our residents, communities and culture. In 2016, it is noted that 64 per cent of all victims, 95 per cent of all sex crime, and 86 per cent of other forms of abuse were directed towards females in Nunavut.

Over the past several years, thousands of Nunavut women and girls have been victims of violence. Statistically, and in reality, within my own family, there is a high likelihood, approaching certainty, of cousins, sisters, nieces, aunts or mother becoming a victim of violent crime—right here in our home communities.

Anything and everything that could be done, should be done to prevent this from happening. The national inquiry, with evidence-based calls to action, can play an important role in shaping a safer future for Inuit women. Given how grave our situation is, discussion on what to do deserves the highest level of discourse, free of speculation and innuendo.

Currently in Nunavut, there are three, and soon to be four, operating mines run by almost as many companies. Although companies vary in practice, there are common approaches to women’s safety that we want to share with the public.

We do not have a police presence at our mine sites. So, we are focused on crime prevention.

To our knowledge, not one woman or girl has been abducted by any of our employees. We share a strong focus on the health and safety of our employees. We have been subject to rigorous environmental assessments and must comply with socio-economic terms and conditions based on real community concerns.

We are all obliged to maximize Inuit involvement in our operations, including Inuit women.

These policies are in use on a daily basis, up to and including terminating male employees exhibiting unacceptable behaviour towards their female colleagues.

English is the common language of mining in Nunavut. It is not this way because we seek to suppress Indigenous people, including women. Of course, the use of Nunavut’s other official languages is accepted. We use English because we need everyone to understand what is going on for the sake of safety.

Nunavut mines are among the few places in our territory where people are regularly searched for drugs, alcohol and other contraband. Workers found in possession of these substances are most often removed from the workplace.

This is in stark contrast to the general tolerance of bootleggers and drug dealers in our communities. Workers are provided their own rooms to sleep in, which may be different than sleeping arrangements an Inuk woman may have at home.

As a result of how we operate, and also due to our regulatory and land tenure regime, the mines in Nunavut are safe places for women to live and work.

Mining companies are human organizations. Although we strive for zero harm, incidents where women experience abuse can and do occur.

As publicized as some incidents may be, the fact remains: women are an order of magnitude safer at our mines than at home. This fact was missing from Lightfoot’s testimony.

Although not perfect, Nunavut mines are actually leading the way in our territory in respecting and supporting Inuit women. Although not invited, our industry would have welcomed participation in the national inquiry in Iqaluit to share our experiences, practices and to answer questions regarding any concerns or consider any improvements to our operations.

Increasingly, female Inuit are taking on non-traditional production, professional and technical roles in mining. And although someone with a graduate degree may take a dim view of cleaning and cooking jobs—Inuit women are prominent in these areas.

These jobs are among the most important occupations on a mine site. A dirty, poorly fed workforce is not a productive, healthy workforce. Workers will typically resign for employment with superior camp services. An Inuk woman in these roles can be rightly proud of her contributions.

Job shaming is not productive. Inuit women in any role within mining are gaining income, knowledge and skills that will serve them very well in “power dynamics” compared to being unemployed at home.

The resource industries have the greatest potential to improve the economic prosperity of Nunavut through the generation of employment income, job training, taxes and royalties that are re-invested.

Our activity will drive multi-generational improvements in health, education, addiction, crime and other community issues beyond economic impacts.

If there is anything more that we can do to protect women, we want to hear about it.

The inaccurate testimony provided to the national inquiry was a missed opportunity. This was our chance as a territory to bring forward factual and relevant information to the commissioners about how Inuit women and girls could be made safer.

By means of this open letter, our chamber seeks to set the record straight and invite any further dialogue with Nunavummiut on this important subject.

Correction: Our Sept. 13 article reported that TJ Lightfoot spoke to the national inquiry as an expert. Commissioners have since clarified that Lightfoot spoke as a witness.