Charity partners to bring Stanley Cup back to Nunavut, with gear for kids 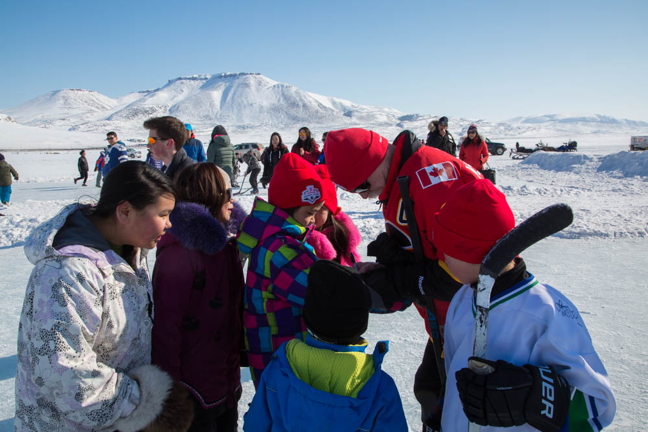 Retired NHL star Lanny McDonald signs autographs in Arctic Bay in May 2016: McDonald, and CWHL player Natalie Spooner will be touring eight Nunavut communities this year with the Stanley Cup, the Clarkson Cup and 150 bags of hockey gear to give away to local youth. (PHOTO BY CLARE KINES)

While National Hockey League teams battle for the Stanley Cup this year, hockey’s holy grail will leave southern Canada and make the rounds in small-town Nunavut.

Scotiabank is teaming up with Project North, Canadian Tire Jumpstart Charities, First Air and the NHL again this year to bring not only Lord Stanley’s cup to adoring Arctic hockey fans, but 150 full sets of hockey gear as well.

As in the past, the tour will include visits from a couple of hockey greats: Stanley Cup alumnus and retired NHLer Lanny McDonald and Canadian Women’s Hockey League star and Olympic gold medalist Natalie Spooner.

Spooner, who currently plays forward for the CWHL’s Toronto Furies, will also be bringing with her the Clarkson Cup, won this year by the Montreal Canadiennes who beat out last year’s champions, the Calgary Inferno, in a 3-1 win March 4.

McDonald is famous for more than just his moustache. According to NHL statistics, he played more than 1,100 games during a 16-year career in which he scored 500 goals and got over 1,000 points playing for the Toronto Maple Leafs, the Colorado Rockies and the Calgary Flames.

“Hockey is woven into the fabric of our nation. More than just a game, the skills that players learn—like perseverance, confidence and teamwork—are transferrable to life beyond the ice,” said President and CEO of Canadian Tire Jumpstart Charities Landon French, in an April 13 news release.

“As the NHL celebrates 100 years of hockey, it is equally important that we anticipate our future and inspire the next generation of hockey players, especially in Canada’s North,” said the NHL’s Laurie Kepron, in the same news release.

A detailed agenda will be announced soon but mark your calendars with these tour dates for now: