Charter airline says it got cold reception in Nunavik 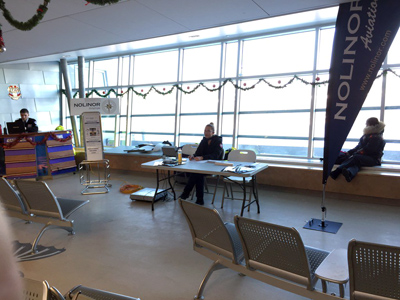 Nolinor Aviation said the flight crew was left to provide its own ramp, ground and counter services at the Kuujjuaq airport over the holidays, while chartering teachers with the Kativik School Board. (PHOTO COURTESY OF NOLINOR)

Nolinor Aviation has plans to expand its services in the Canadian Arctic in 2017, but the airline says it isn’t getting the welcome it hoped for.

The Montreal-based charter service, which already operates in Nunavut, was awarded a contract to fly teachers with the Kativik School Board to and from Nunavik over the Christmas holidays.

But when the airline’s charter arrived in Kuujjuaq Dec. 21 to pick up its first load of passengers, Nolinor’s vice president, Marco Prud’homme, said the flight crew was left to provide its own ramp, ground and counter services.

“Nobody wanted to give us the service,” Prud’homme said. “They were either busy…or said they couldn’t because of outside pressure.”

Prud’homme said the crew built its own ramp to load cargo it moved from the terminal itself, while putting up a portable counter inside the terminal for check-in.

“It’s important to understand that from our perspective, our concern is that passengers who had to walk and cross the taxi way to get to the plane,” he said. “That type of situation, in our view, adds some safety issues.”

Prud’homme said Nolinor did not encounter issues with its other three flights to and from Kuujjuaq over the holiday period, although the airline has written to both the airport and Transport Canada to report the incident.

For its part, the Kativik Regional Government—whose transport department oversees operations at the Kuujjuaq airport—told Nunatsiaq News that ground and ramp services, along with access to airport facilities, “were given in full.”

“The only thing that was not provided was the ground handling services,” the KRG said in a Jan. 9 email. “But this is the responsibility of the airline and is not something we provide.”

For its part, Makivik has yet to respond to a request for an interview or comment.

Prud’homme says the incident sends a clear message that new airlines are not welcome in the region.

That’s unfortunate, he says, when northern communities could benefit from improved and cheaper services with more competition in the airline industry.

“We’re surprised to see the way people react sometimes to competition,” Prud’homme said. “Everywhere you go in the aviation industry, people are trying to help each other.”

That won’t stop Nolinor from trying; Prud’homme said the airline’s services are in demand throughout the region, and Nolinor has written to Kuujjuaq airport management to formally request permanent counter space at Nunavik’s main airport hub.

But the airline won’t say what contract or air route it’s eyeing.

The airline, which just celebrated its 25th anniversary, has dropped hints on social media about plans to expand this year.

2017 will be a big year. Be the first to know why on December 31st. #myths and #legend #nolinoraviation Only 3 days to go.

Nolinor is best-known across the North for providing charter and cargo services for Nunavut’s two operating mines: Agnico Eagle Mines’ Meadowbank mine and Baffinland’s Mary River mine.

But the airline has hit a few dead ends along the way. In 2013, Nolinor teamed up with the Nunavik-based Developpements Aputik to form Uppik Aviation to provide charter services to the region’s mining industry, through the venture never got off the ground.

In 2016, Nolinor teamed up—and then pulled out—of a venture with Iqaluit’s Go Sarvaq to operate regular flights between Iqaluit, Ottawa and Halifax.